The Charge of the Light Brigade was a relatively minor engagement, in a single battle of a rather pointless war, that was put under a microscope from almost the very moment the survivors returned from their charge.

The overall conflict and the charge gave rise to two distinct varieties of clothing as well as a resoundingly famous poem, noted for being one of few great works of literature that became immediately famous after it was written, and continued its fame even though to modern times.

The charge was an attack during the Battle of Balaclava during the Crimean War of 1853-56. The war pitted the Russians against the allies of France, the Ottoman and British Empires. The allies quickly invaded the Crimean Peninsula and laid siege to the main port city of Sevastopol.

The allies set up fortified redoubts heights among the rolling hills and valleys around Sevastopol.

On October 25th, the Russians attacked from the north against the unprepared British position on the long stretch known as Causeway Heights that ran between the North and South Valleys, close to the British claimed town of Balaclava. The Russian forces quickly set up cannons along the north ridge and eastern edge of the North Valley and captured most of the British cannon redoubts along the southern Causeway Heights.

The British Light and Heavy Brigades were both on the western edge of the North Valley. Overall command fell to Lord Raglan who was positioned on a very high point to the west and able to see the entire sequence of events including the capture of Causeway Heights. Command of the Cavalry fell to the Earl of Lucan while command of the Light Brigade fell to the Lord Cardigan.

Before the famous charge, the Russian attack had been halted in large part to a famous stand by a British infantry detachment that stood up to and halted a Russian charge. These men would be famously known as the Thin Red Line and applauded for their bravery. With the lines more or less stable the Russians began seizing the British cannons along the Causeway Heights, infuriating Lord Raglan.

The cavalry had been holding their position, aware of some attack but occupying a lower position in the valley. Lucan was given an order by a messenger from Raglan that ordered a cavalry attack on the causeway that “will be” supported by infantry. Raglan had intended that the cavalry attack immediately with later support by the infantry as the Russians were still disorganized and laden with the captured cannons.

Lucan, knowing that cavalry traditionally was supported by infantry, interpreted the “will be” part of the order as meaning that infantry will be there for support soon, and once that occurs, launch an attack, so Lucan and the cavalry remained idle.

Lord Raglan saw that his order for immediate attack was simply not being followed drafted another message with specifications saying he wishes the cavalry to advance rapidly to the front and prevent the enemy from withdrawing with the guns. Raglan intended this to be a follow-up to the last order that mentioned the target of Causeway Heights though it was not reiterated in the second written order.

Rather than sending the typical messenger, Raglan sent a nearby captain Nolan, known for his speed on a horse. Nolan may or may not have gotten verbal confirmation of the target being the Causeway before setting off to Lucan. Nolan was known as a hot-headed and aggressive officer who was especially critical of Lucan’s past cavalry tactics, which he thought were overly cautious. When he reached Lucan he seems to have been enraged by Lucan’s inactivity and gave the order.

Though Lucan should have realized that the order intended the target to be the Causeway Heights, he was confused as from his position he could not see any guns on the causeway as they were just on the other side of the causeway’s ridge. Asking Nolan for clarification he said “what Guns, sir.” Nolan angrily replied “There my Lord is your enemy” and vaguely waved his arm eastward towards that valley saying “there are your guns”

Lucan and his officers could only see the guns at the far eastern end of the valley over a mile away and could only assume that those were the target. Though knowing that the attack was illogical and almost suicidal, the order was given. Cardigan was said to have mentioned that the Russians had cannons on either ridge and their target, more cannons, was over a mile away with Russian riflemen scattered throughout the valley. Lucan replied to him that “But Lord Raglan will have it. We have no choice but to obey”.

Cardigan and the Light Brigade would lead the charge with at least 600 men with some foreboding estimates at 666 men. The Heavy Brigade under Lucan was supposed to follow soon after, but Lucan halted his troops at the mouth of the valley stating later that he shouldn’t lead his troops into the same carnage and should hold a position to relieve the Light Brigade if/when they came back from their charge.

So just the Light Brigade was left charging into the valley. They were accompanied by Nolan, the man who carried the order. There is some evidence that he saw that the group was charging at the wrong target as he galloped to the front and seemed to be attempting to redirect the charge to the right before he was struck and killed by cannon shrapnel.

At this point only an excerpt of the famous Tennyson poem could describe the charge:

Cannon to right of them,

Cannon to left of them,

Cannon in front of them

Storm’d at with shot and shell,

Boldly they rode and well,

Into the jaws of Death,

Into the mouth of Hell

Though the men were well aware that they had a shockingly low chance of even surviving, they still charged. Cardigan himself kept the men from fully galloping, keeping a tight formation and trot until they were less than 100 yards away, facing cannon shot from each ridge and scattered riflemen firing as they rode by. With over a quarter of the Light Brigade lost, the cavalry hit the cannon positions at the far eastern edge of the valley.

Despite their losses, the Light Brigade was overwhelmingly successful and routed the Russian cannon positions. They even routed sections of Russian cavalry much larger than their own forces. Some other Russian cavalry, heavy lancers, were positioned on the northern and southern flanks of the valley and began to ride into the valley to cut off the retreat just as the other retreating cavalry realized that they actually had far greater numbers and began to rally.

The survivors were now completely surrounded and vastly outnumbered, but groups of officers organized the men and the Light Brigade was able to punch through the Russian lancers and headed back to their original position and the waiting Heavy Brigade. Though they broke through they again had to gallop through enemy cannon fire from three sides.

As they retreated the surviving Russian cannon crews took up their cannons and resumed fire with devastating grapeshot at the closely fleeing British. When the Light Brigade reached safety they had lost very close to half of their men, and more than half their horses were killed or perished soon after.

The charge was technically temporarily successful in terms of how Lucan and Cardigan interpreted it. though a perilous charge, the Brigade routed a large number of Russians. The battle is seen as a slight Russian victory as some cannons were still captured and with the Light Brigade so wounded Lord Raglan could not muster much more offensively.

The terrible military blunder could and should have been avoided. Lord Raglan should have better clarified his written orders, he made assumptions because he could actually see the field of battle. Captain Nolan should have laid out the orders much more specifically, enraged or not.

Lucan and Cardigan should have discussed the orders and perhaps demanded more clarification. Lucan and Cardigan were actually brothers-in-law who had a long personal hatred of each other that likely influenced the charge and Lucan’s decision not to reinforce Cardigan with the Heavy Brigade. 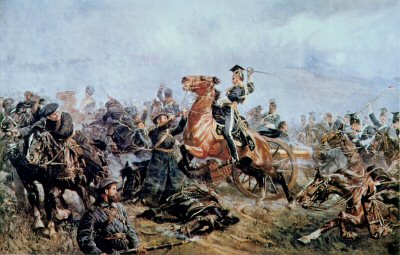 Despite riding “into the mouth of Hell,” the Light Brigade had some degree of success. Had they actually been supported by the Heavy Brigade the charge may have been much more successful and could have created a growing crack in the Russian assault, especially considering that the infantry was eventually coming.

Had Nolan not been the unlucky first casualty, he may have been able to redirect the charge at the scattered Russian troops on the Causeway Heights, which almost certainly would have been an easy victory to turn the tides on the Russians.

For those still curious, the distinct varieties of clothing having a name due to the war are the Cardigan, so named for the style of buttoned sweater worn by Lord Cardigan and the Balaclava woolen facemask, worn by a lot of troops around the city of Balaclava.