The career of the military engineer may not have the glamor of the fighter pilot or samurai warrior, but throughout the history of warfare, battlefields have been shaped by great feats of military engineering.

The Roman army is famed for its prowess in military engineering. Following the reforms of Marius, every legionary was equipped to dig and build, and expected to do so without question.

Much of this work involved building fortified encampments. The most spectacular was built on the orders of Julius Caesar at Alesia in Gaul. When Gallic chief Vercingetorix retreated to this hilltop fort, Caesar built a 14-mile line of siege works around it. Threatened by Gallic relief forces, the Romans built a second line of defenses to protect their camp, spending the siege as both besiegers and besieged, living between two lines of trenches and barricades.

Near the end of the first Roman-Jewish war, Jewish warriors and civilians took refuge in the mountaintop stronghold of Masada.

This position was so inaccessible that the Romans spent three months building a vast siege ramp to reach its walls, and a giant siege tower to attack with up the ramp. The remains of the siege ramp are still visible to this day.

Welsh raiders had long been a thorn in the side of English lords, and so when King Edward I conquered Wales he was determined to make the conquest stick. Spectacular stone castles such as Caernarfon, Beaumaris and Harlech were quickly built all around Wales, giving the English domination over their neighbors.

With the English able to retreat safely behind these walls, Wales would never again break free.

Napoleon’s retreat from Moscow is usually associated with military failure of the most hubristic sort. But it was only through military engineering under pressure that any of the French forces escaped alive.

Trapped against the River Berezina, and with Russian troops closing in, the Grand Army looked doomed. But it had brought a bridging column, with wagons full of engineering equipment, and this column built a pontoon bridge.  Though they suffered terrible casualties from the two pursuing Russian armies, thanks to their engineers the French were able to escape across the river.

During the Crimean War, the allied British, French and Ottomans spent a year besieging the Russian city of Sevastopol. It was another occasion where engineers would show their amazing capabilities yet still meet defeat.

Lieutenant Colonel Eduard Totleben, the Russian engineer commander, was a pioneer of “flying entrenchment” – using the enlarged manpower of modern armies to raise new defenses quickly as the siege progressed. At Sevastopol he proved the value of such entrenchments, with Russian defenses holding off allied assaults for an entire year, at a heavy cost to the attackers.

The First World War would see the ultimate embodiment of Totleben’s flying entrenchment technique. Faced with the threat of horrifyingly powerful artillery, both sides dug hundreds of miles of trenches, and shelters deep beneath the ground.

These have become so iconic of the Great War that we now take them for granted, but the combined human achievement of these vast defensive networks, and the speed with which they were built, has never been matched.

Following the experience of World War One, the French military were determined to create stronger defenses against future German invasion. This resulted in the Maginot Line, a string of concrete fortresses, weapons installations and obstacles that ran the length of its border from Switzerland to Belgium.

This fearsome achievement, comparable with Edward I’s construction in Wales, proved as impenetrable as it was supposed to be. But impenetrability was not enough, and the greatest engineering in the world could not overcome flawed strategic thinking. Having not built all the way to the coast for fear of compromising Belgian neutrality, the French saw this neutrality ignored by Nazi Germany, whose armies simply marched around the end of the Maginot Line. 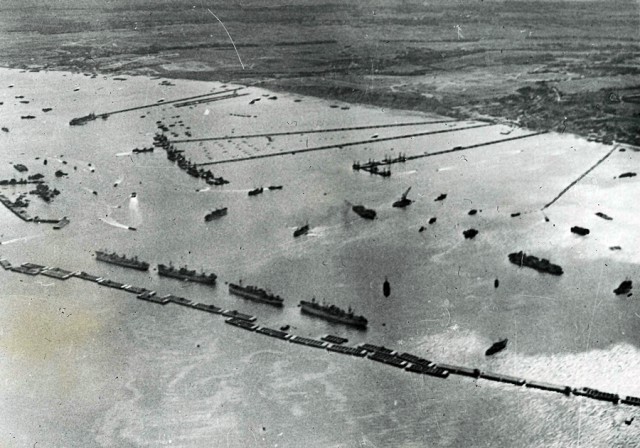 In to the D-Day landings of World War Two, the Allies faced a challenge in supplying their troops. German defenses made the capture of a port town extremely dangerous, and there was no guarantee it could be done at all. But once they landed, troops would soon need to be resupplied.

The solution was the Mulberry harbors, pre-fabricated concrete harbors whose component parts were floated across the English Channel and sunk in place at Omaha Beach and Arromanches. The Omaha harbor was destroyed by a storm, but the design far exceeded expectations in its durability. Meant to last three months, the Arromanches harbor was used heavily for eight months, and over a ten month period it unloaded over 2.5 million allied troops as well as 4 million tons of supplies.

Some feats of military engineering are about grand design, but others are about capability under fire. French sappers, trapped inside the airhead at Dien Bien Phu during the war for Indo-China, proved that they were soldiers as much as engineers.

When the steel plate airstrip was broken by bombardment, they went out and welded it back together, in broad daylight and under enemy fire.

After seizing the east bank of the Suez Canal in 1967, Israel constructed the Bar Lev line to hold it – 26 forts connected by a sand rampart up to 75 feet high.

The ingenuity of this sturdy defense was matched by the Egyptian military engineers who broke it on 6 October 1973. Floating water cannons into the middle of the Canal on pontoons, they blasted away the sand using hydraulic power, creating openings that let the Egyptians retake their lost territory.