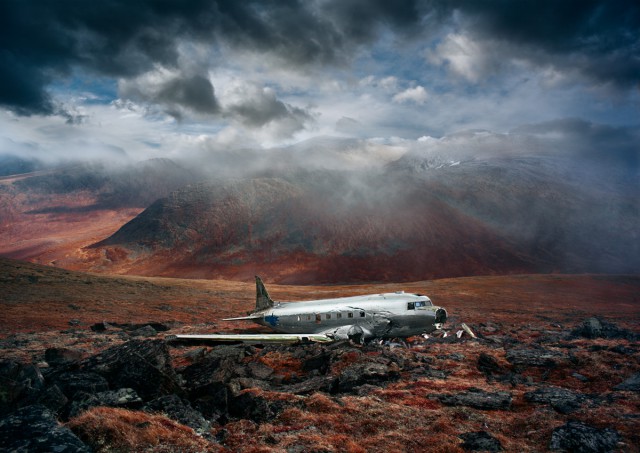 In my last week’s blog ( September 3 , 2015), I wrote about USAF’s horror year 1950, with 6 aircraft lost in 7 weeks, including a B-36 with an Atomic Bomb on board. In terms of loss of life, the worst accident happened in that same winter with a C-54 D Skymaster ( Military version of the DC-4)  that disappeared on January  26, 1950 without a trace on a flight from Alaska to Montana with 44 people on board. This mysterious incident triggered one of the largest air searches ever organized by the USAF (some 85 aircraft in total were involved in the following weeks of air search). The C-54 had last sent a message while flying over the Yukon weather station Snag near Whitehorse. Subsequently, the search named Operation Mike focused on that area but on the first day of the search ( January 27) adverse weather conditions were reported with icing conditions and heavy snow fall, that would continue for 3 more days. The chances for finding the lost aircraft or its remains were to be reduced with every new day of snow fall.  Nevertheless, the search was to be continued and one of the participating aircraft was this USAF  C-47  Serial 45- 1037 (see photos),  involved in the rescue operation since almost 2 weeks.

According to the journals ( via my friend  Dirk Septer) from the 10 men crew on board ( mixed US and Canadian military), they flew too low over the mountains of the McClintoc range, as later turned out,  likely in the hope to detect the hidden/snow covered wreck of the missing C-54 that until that date was maybe overlooked in higher flights over the same area. The drama  for the C-47 started without prior notice,  as a sudden strong downdraft caught the aircraft in an iron grip and pushed her down with such ferocity that the pilots could not escape from this invisible evil hand.  The aircraft was soon hitting terrain, but  luckily for them,  that was a rather flat slope with packs of  fresh snow which must have restrained the impact of the contact with the hostile soil. The snow had also covered those large boulders, rendering them harmless in the slide that followed. 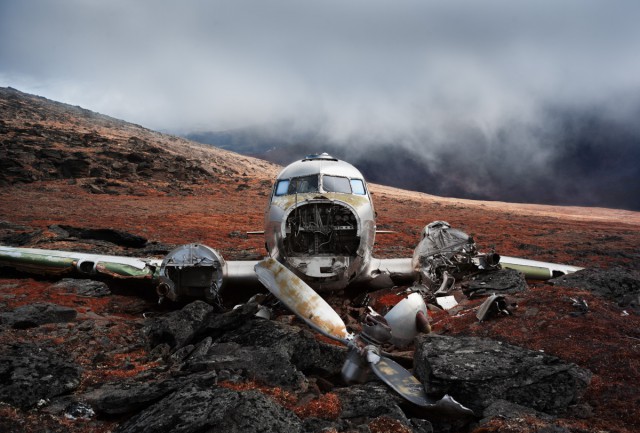 The boulders otherwise  would surely  have ripped the aircraft apart in no-snow conditions as you see on the photo above. But the plane went down on a white cushion that worked as an airbag and survived the terrain impact almost intact.  With all wings and stabilizers still in place, and fuselage in one piece, hallelujah, or boy, were they lucky! After  a first bounce, the C-47 came to rest in the snow and it turned out that all 10 crew members had survived the crash, be it with 3 more or less seriously wounded.  The accident can best be described as one of the odd Luckiest unintended Crash landings made in the history of aviation. Note: The pilot was not preparing  for a crash landing, the aircraft simply went  flat out against the hill side! 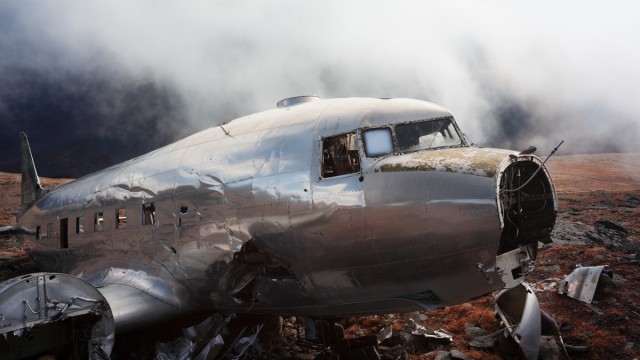 This is a most remarkable picture, that shows first of all the shiny state of the aluminium skin. Now 65 years after  this C-47 went down, there are no traces yet of corrosion, while there is year round plenty of rain, mist, snow and humidity out there in relatively low temperatures  ( I was there in late August and my fingers went numb with the cold). But the absence of salt and high temperatures gives the aluminium a near eternal life as it seems. The harsh weather and wind seem to have had no dulling effect on the polished the skin while most of the paint is gone.

A second point of attention is the gaping hole in the fuselage, just in front of the main wing’s fairing. This was caused by the starboard runaway propeller, that came loose at the moment of impact on the hill and as a huge disc grinder, slashed into the lower rear end of the cockpit. The radio operator was sitting right there behind that flimsy skin panel and normally could have been killed by the incoming prop blade. But he surely had all the fortunes of the world: the downdraft that had pushed  the aircraft so dramatically out of control , had a huge impact on the crew, most of them not wearing safety belt as the imminent danger of a crash was not realized. All of them inside the doomed plane went suddenly up in the air as the aircraft entered the downdraft, to the extend of jaws dropping and the radio man was lifted out of his sitting position just a second before  the sudden crash and the ensuing act of the prop blade ” knocking on the door” . He was sort of airborne inside the cockpit as the slasher came in and that may have saved his life! But the blade hit his leg, it severely wounded him with a broken bone.

The impressive 3 photos above are taken by my friend Felix Stadler from Germany, who made a most amazing portfolio of American ‘Transports” that I can strongly recommend you to watch at http://555nm.de/transportation.html. Some time ago in mid 2014, he approached me and informed about the crash sites that I had visited during my 20+ years of expeditions in search  of the Legendary DC-3 on the last Frontiers. He was told that I was about to launch a book named “The Dakota Hunter”, published in April 2015 by Casemate USA/ UK.  I told him about my wonderful trip to this site in the Yukon and in September 2014, he went there all alone to watch the Magic of this crash site, as I had seen her some years earlier. In my book I describe the aircraft as the “Titanic” of aircraft wrecks, a genuine time capsule in which I found under the floor plate a  military canvas boot, no doubt a left over of one of the crew members.

The picture above was made by Julie Le Bolzer, journalist from Paris who came along with me to visit the Yukon C-47 crash site . We did it by Helicopter and had a very fascinating flight in relative comfort. but Felix decided to go up there ( over 6500 feet alt.) all by himself, alone. If interested to read the continuing story ( Volume 2), follow me and read my blog on Facebook of on War History Online. In my coming blog of September 26 , 2015 , you can read how the crew of 10 survived their ordeal of being lost in a snow covered airplane, that was most probably never to be spotted from the air.  They had survived the crash alright, but they realized that that was by no means a rescue as they had searched the missing C-54 for almost 2 weeks. That was all without any results and that doomed C-54 Skymaster was never ever found back again. On top, Felix will have another surprise in Volume 2 for the fans of adventure stories. and a few more photos of this wonderful site and its C-47, that is stretched over the yellow hill as a tribute to its ruggedness.

Stay tuned and while waiting for the next weekend’s Dakota Hunter blog, you can also take a sneak preview in my book at www.dc3dakotahunter.com. The book can be ordered directly at Amazon via the button “Order the Book” on my web site. At Amazon USA/ UK , you can also visit the order page of The Dakota Hunter, some excellent reviews ( 5 star) of my book. Click for this the link and scroll down on the page for the reviews at http://www.amazon.com