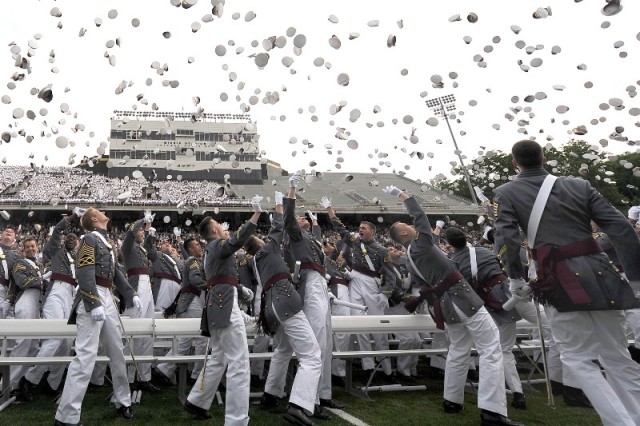 When the country fell apart, West Point was not immune to the bitterness and divisive political atmosphere. Most of the commanders on both sides of the war were West Pointers.

Fifty-five of the 60 major battles fought in the Civil War were led by people who studied at West Point. At the time in the industrial north one of the very ways to get into good society was to graduate West Point.

The truth was the same for a boy from the South. In fact, it required then as it does now, a letter of recommendation from a Congressman to be included in the student body. George Pickett lived in Virginia where so many kids wanted to join, he ended up moving to Illinois and asked a congressman named Abraham Lincoln to recommend him.

West Point was no easy school. They learned mostly engineering and matters of war, no Greek and Latin as in other universities. The bonds built there were hard to break and even as the war flared there were moments of grace between commanders of both side.

Grant himself was arrested at West Point and sentenced to a month in his barracks for failing to attend church. Jefferson Davis was a bad boy who was actually court-martialed for receiving so many demerits. Only one man ever passed through there without a single demerit, and that was Robert. E. Lee.

The graduating class of 1861 was split and cadets began resigning and heading south. All told 300 Cadets served in the Army of Northern Virginia. Once, during a procession the classes screamed out the Star Spangled Banner and Dixie in the same rally demonstrating that the school was divided, as was the country.

There was even a first for West Point, a fist fight between two cadets over the issue of slavery. Emory Upton and Wade Hampton Gibbs stood at the end, battered but still full of the fight and would serve opposing armies like all the soldiers in the war. The question for everyone was where would their allegiance go? To country? To the state? To the family? It was a very confusing time. Even West Point made a new oath of fealty to the country mandatory. Cadets who refused to take it were summarily dismissed.

Bonds are hard to break, particularly those formed at West Point. During the siege of Richmond, George Pickett’s wife bore him a son and Grant sent him a tea service across the skirmish lines. AP Hill went after McClellan at the battle for Richmond many believed because at West Point McClellan married the girl AP Hill was crazy about.

In fact, when the first shots were fired at Fort Sumter, Pierre T. Beauregard knew that its leader was once a professor of his at West Point. He exchanged pleasantries with Anderson but fired upon him anyway.

When the war was finally over, the meeting at Appomattox Courthouse looked like a West Point graduating class. The old enemies embraced and determined to do what they could to stop further violence and to mend the country back together.