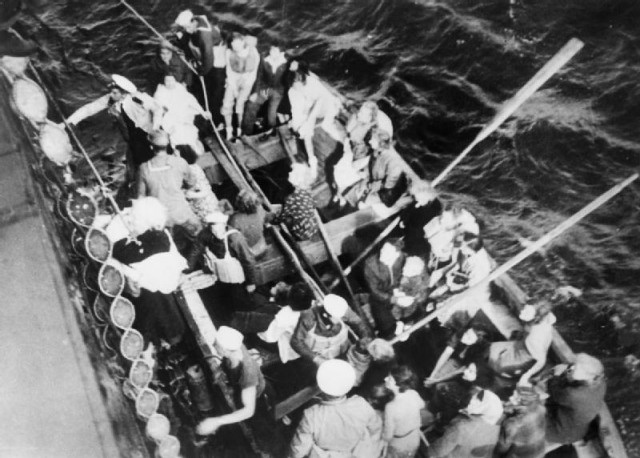 Survivors in one of Athenia‍ ’​s lifeboats alongside City of Flint

Few passengers on a cruise ship nowadays ever give much thought to escaping the ship in lifeboats if an emergency occurs. This also was the case 75 years ago when passengers aboard the British liner Athenia suddenly had to abandon their ship at dusk after it was torpedoed by a German submarine (the central event in my forthcoming historical novel, Without Warning).

Then, as now, ships were required to carry lifeboats and life rafts that exceeded the total number of passengers and crew aboard. Modern lifeboats, however, have several advantages over those carried by Athenia.

The newer lifeboats can be launched by emergency power systems or by gravity if the power fails, and they can do so even if the ship is listing to one side by as much as 20 degrees. Such boats are enclosed to protect passengers against the elements, are self-powered, and have communications equipment or radio beacons that transmit signals to help rescue vessels locate them.

It was a very different situation for Athenia’s passengers. The ship carried 26 wooden lifeboats, evenly distributed between muster stations to port and starboard. In most cases, two boats occupied the same station, with one seated on top of the other. The smaller top boat had a capacity of 56 people, while the bottom boat held 86. The presence of the lifeboats no doubt gave passengers a sense of wellbeing, but getting the boats safely off the ship depended as much on the weather and sea conditions as on the skill and training of the crew.

Each lifeboat relied on a pair of davits, small crane-like devices, to lift it off its resting place and lower it into the sea. Ropes, called falls, ran from each lifeboat’s pointed bow and stern up to its davit through a double block and tackle system that the provided the mechanical advantage for a team of seamen at each davit to raise the boat by hauling on the free ends of the falls.

Once the boat was lifted up, each of the davits would be cranked out over the side of the ship using a hand-turned gear at its base. To lower the lifeboat, the seamen relied on gravity. They wrapped the falls several times around a “gypsy barrel,” a small flanged cylinder near the base of the davit. This provided them with sufficient friction to control the boat’s descent.

It was a simple mechanical system that worked well enough, until a fall became fouled on a gypsy barrel or one of the seamen lost his grip on the line. This happened with at least two of the boats launched by Athenia’s crew. The lines had to be cut or let out to run free and the boats dropped the last five to 10 feet into the sea.

Once in the water the boats were propelled by long, heavy oars, which were intended to be operated by crewmen. However, 19 crewmen died in the torpedo attack, leaving the passengers to take over the oars in some lifeboats. Several of the wooden boats leaked and had to be bailed constantly. Some of the oars proved to be inaccessible because passengers were sitting on them. At night in the crowded boats, some passengers couldn’t locate their boats’ oar locks, tillers for the rudders, or signal flares. To make matters worse, the lifeboats were open to the elements, leaving passengers exposed to drizzling rains, chilly winds, and biting ocean spray.

Despite all these difficulties, Athenia’s crew successfully launched all her lifeboats in a little more than an hour. Their tireless efforts undoubtedly contributed to the 90 percent survival rate for the ship’s passengers and crew, a remarkable achievement under any conditions.