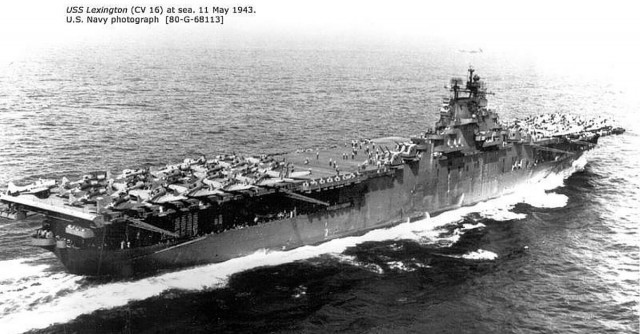 During the Second World War, their emerged many interesting stories from the annals of naval history, which demonstrate the remarkable performance of the sailors who served throughout the vast, hostile waters of the Pacific, enduring unfathomable risks such as the hellish explosions delivered by aircraft.

While serving aboard the aircraft carrier U.S.S. Lexington, local resident and former sailor Cletus Kueffer recalls living through such dangerous circumstances, and the lives that were lost in an effort to help bring peace to a world embroiled in war.

The oldest of nine children, Kueffer was raised on a farm in rural Moniteau County (Mo.) and working for the state highway department when he received his notice to report for a physical in 1942.

“My draft notice hadn’t arrived yet,” said Kueffer, 94, California, Mo. “But I had a friend tell me, ‘I’m not going to dig foxholes (in the Army),’ and he convinced me to join the Navy … even though I couldn’t swim,” he grinned.

The aspiring sailor enlisted in Jefferson City on September 13, 1942 and was able to qualify as Third Class Painter because of his previous experience in working on bridges with the highway department—a  benefit that would provide him with monthly pay of $78 instead of the $50 received by recruits without qualifying experience.

Spending only 30 days in boot camp at Great Lakes, Ill., “because the Navy was pushing us through pretty heavy back then,” Kueffer said, he soon became part of a small group of carpenters and painters transferred to Quonset Point Naval Air Station in Rhode Island, where he remained until receiving orders in February 1943.

“I was assigned to the U.S.S. Lexington (CV-16),” Kueffer explained—a recently commissioned aircraft carrier that would earn the nickname “Blue Ghost” because “Tokyo Rose”—a Japanese radio broadcaster specializing in propaganda—mistakenly reported on the ship’s sinking several times during the war.

According to the book “Blue Ghost Memoirs,” the vessel remained in Boston Harbor for a few “months of outfitting, tuning equipment, loading supplies and ammunition, and assembling the crew” before leaving for their sea trials known as a “shakedown cruise.”

The ship sailed to the Gulf of Paria off the coast of South America and returned to Boston, where, Kueffer recalled, the crew “stayed for a few days for minor repairs and little things that had to be taken care of.”

In June 1943, the Lexington sailed to San Francisco to pick up a battalion of Marines and then to Pearl Harbor, loading the carrier with the initial complement of planes they would use in combat missions.

As part of a task force consisting of “battle wagons”  (battleships such as the USS Iowa and Missouri), heavy cruisers and destroyers, the Lexington began navigating the waters of the South Pacific while Kueffer worked as a painter placing identification numbers on the newer aircraft and repairing those damaged during combat flights.

“(The Lexington) was hit twice during the 27 months I was aboard,” Kueffer said. “The first time was when we were torpedoed in December of 1943 near (the island of) Kwajalein,” he added.

Records maintained by the veteran note that the ship was also damaged in early November 1944, when Japanese aircraft bombed it. Following both incidents, the extent of the damage to the ship required it to port in Bremerton, Wash., to undergo repairs.

The ship never rested long and was soon back out on operations, continuing its missions that would carry it through locations such as Guam and the Philippines, enduring sporadic attacks by Japanese aircraft that would occasionally result in casualties.

“While we were out to sea, they had no place to store the bodies of the sailors killed in action,” Kueffer said. “When it was time for a burial, everyone not on duty would go topside and the bodies would be lying on metal stretchers in canvas bags.” Solemnly, he added, “Then the chaplain would say a few words and over the side (of the ship) the bodies would go.”

In June 1945, Kueffer was sent back to the United States and spent several weeks assigned to the paint shop at Ottumwa (Iowa) Naval Air Station, later transferring to Clinton, Okla., where he received his discharge in December 1945.

In the years following the war, he lived on the farm he purchased from his great-aunt while he was still in the Navy, married his fiancée, Geneva, and raised two daughters. He worked 24 years for the highway department, helped form a structural painting company and farmed for several years.

A current member of the Masonic Lodge, VFW, Disabled American Veterans and the United Church of Christ in California, Kueffer asserts that some of his most treasured memories are from the time he spent on the high seas more than 70 years ago—events, he noted, which earned him 12 battle stars and the ship he served aboard a Presidential Unit Citation.

“At my age, a lot of the guys I served with are now deceased, but I consider myself pretty lucky … that I came back from all of that, that I survived all that I went through during the war,” he said.

“But it was all part of my duty,” he added. “There was nothing wrong with me—I was healthy and I wouldn’t have felt right if I hadn’t gone and done my part.”

Jeremy P. Ämick writes on behalf of the Silver Star Families of America.