To commemorate the 71th anniversary of the liberation of Dachau on April 29th, Alex Kershaw has sent us an exclusive extract from his book The Liberator

COLONEL FELIX SPARKS, a 26-year-old task force commander with the 45th Infantry Division, was deep inside the Dachau complex. He had been in almost continuous combat since July 1943 and was a veteran of four amphibious invasions in Europe. But what he was now about to experience inside Hitler’s first concentration camp would be more intense, and more harrowing, than anything in over five hundred days of war. It would, in his words, “rob the mind of reason”.

Sparks saw manicured lawns and rosebushes in full bloom, clearly well tended. To his left there was the sound of firing. He and his men carried on, as they had in so many other urban environments, keeping close to doorways in case of snipers, not bunching.[i] He reached a central building with a large lobby. At one end were glass cases containing antique firearms. He again heard firing. He left the building but could not see where the shots were coming from. Poplar trees in spring bud and buildings obscured his view.[ii] Then he saw a lieutenant from the 157th Infantry Regiment called Bill Walsh emerge from between a couple of buildings. He was chasing a German.[iii]

Walsh began to beat the German over the head with the barrel of his carbine.[v]

Sparks ordered Walsh to stop. But Walsh ignored him. So Sparks pulled out his .45 and[vii]clubbed Walsh on the head with its butt, stunning him and knocking him to the ground.[viii]

“I’m taking over command of the company,” yelled Sparks.[x]

One of Walsh’s men, Sidney C. Horn, recalled that seven men were needed to take a hysterical Walsh into a room and “get him quieted down. He really lost it there.”[xi] Walsh later confessed: “I’ll be honest with you. I broke down. I started crying. The whole thing was getting to me. This was the culmination of something that I had never been trained for.”[xii] 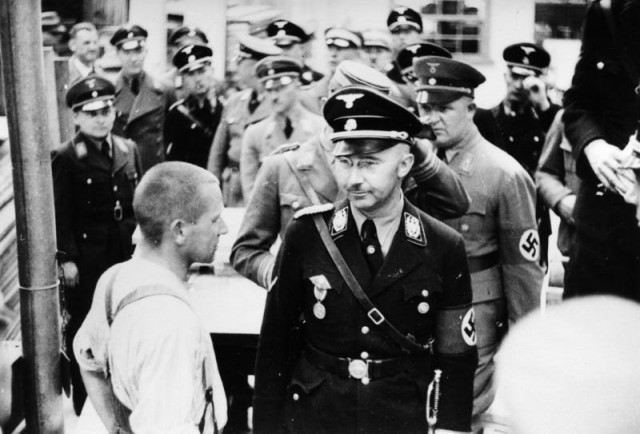 Inspection by the Nazi party and Himmler at Dachau on 8 May 1936.

Sparks and his party moved on toward the Jourhaus, a building at the actual concentration camp’s entrance, whose famous wrought iron gate had a sign above it – Arbeit Macht Frei [Work Sets You Free]. Sparks spotted a guard tower. There were still some SS troops manning it. The easiest way to deal with them was to pick them off with rifles, using the cover of nearby buildings.[xiii] Sparks ordered his men to do so and the guards were quickly dispatched.[xiv]

Sparks reached the gate to KZ Dachau. Some prisoners were huddled close by but the large enclosure behind them was empty. Where were the 32,000-odd people thought to be inside KZ Dachau? The inmates near the gate were a pitiful sight. Thunderbirds started to throw anything they had through the wire fence and over it. Wrigley’s chewing gum. K-rations. Field jackets. Candy. Lucky Strikes. Anything they could find to give to living skeletons stripped of everything except life.[xv]

A FEW HUNDRED YARDS away, 27-year-old Robert Antelme, the courageous French writer and resistance worker, still lay in his lice-infested cot, close to death. His barrack, one of thirty-four in KZ Dachau, had been designed for around 250 people but now contained over a thousand.[xvi] He had been at the mercy of the Gestapo and then the SS since July 1944, having arrived at Dachau from Buchenwald on the same train, it is thought, that the Thunderbirds Sparks had just discovered.

There was the sound of gunfire, not far from his barrack. SS men confer with GeneralHenning Linden during the capture of the Dachau concentration camp. Pictured from left to right: SS aide, camp leader Untersturmführer Heinrich Wicker (mostly hidden by the aide),Paul M. G. Lévy, a Belgian journalist (person with helmet looking to his left), Dr. Victor Maurer (back), Gen. Henning Linden (person with helmet, looking to his right) and some U.S. soldiers

Antelme found the strength to sit up. He glimpsed a green helmet out of the window. An American was walking past. Antelme propped himself up on his elbows. He weighed just seventy-seven pounds. His internal organs were visible through his parchment-thin skin. He listened to his fellow inmates as figured out they what was happening.

Another clutched his head. He was clearly insane.

Over and over, the man clutching his head shouted that they were free. Then he screamed and stamped his feet on the floor. Antelme saw more American helmets pass by outside. There was an old man lying beside him. Antelme was determined that he should glimpse freedom – an American helmet – before he died.

Antelme hit the man’s foot again, this time as hard as he could. The old dying man had to see freedom. He must see the Americans’ green helmets.

The man managed to move his head and turn toward the window. But it was too late. Sparks’ men had passed by.

Antelme fell back on his bunk. He knew he was dying. He had no strength, nothing left in reserve now. He was too weak to sing like the others, too emaciated to even crawl toward his liberators and embrace them. But at least he had seen it. He had seen freedom. He had glimpsed the green helmets of Felix Sparks’ men.

SCOUTS FROM I Company discovered a building not far from the Jourhaus. It was a hospital of some kind. A red cross had been painted on its roof. The scouts pushed their way into the building and discovered it was an infirmary for SS guards and soldiers, not for camp inmates. It was maddening to see well cared for SS men lying on clean white sheets.

Lead scout John Degro and others ordered the Germans lying in beds to get outside where many soon cowered, hands in the air, some still bandaged. Then Degro and others hustled the SS men toward a nearby coal-yard. “We kicked all the Germans into the yard,” recalled Degro.[xix]One of the men taken from the infirmary was Hans Linberger, a Waffen SS veteran who had been wounded in a battle near Kiev when an anti-tank gun shell had exploded and blown off his left arm. [xx]He had also suffered shrapnel wounds, his fourth serious injury in combat, before arriving at the Dachau infirmary on 9 March, six weeks before.

Linberger now stood with other SS against a stucco wall in the coal yard, adjacent to the Dachau complex’s heating plant. The men rounded up with Linberger were indeed SS, but most, if not all, had never served in a concentration camp – they did not belong to the SS-Totenkopfverbande [SS-TV] that administered camps in the Third Reich. In fact, very few of KZ Dachau’s actual guards were now in the Dachau complex – the vast majority had fled the day before, leaving other SS men quartered nearby to surrender the camp.[xxi]

As far as I Company’s men were concerned, Linberger and the young men holding their hands above their heads were SS – Schutzstaffel, the “Protection Squadron”, their insignia of two lightning bolts indicating they were Hitler’s most fanatical troops. That was all that mattered. They had massacred defenseless GIs at Malmedy.[xxii] They had ruthlessly employed flame-throwers to scorch their fellow Thunderbirds to death at Reipertsweiler that January. Always, they had fought hardest to kill them, to slow their advance, most recently in Aschaffenberg and Nuremberg. They had, it appeared to the Thunderbirds, also overseen the unimaginable atrocities at Dachau. 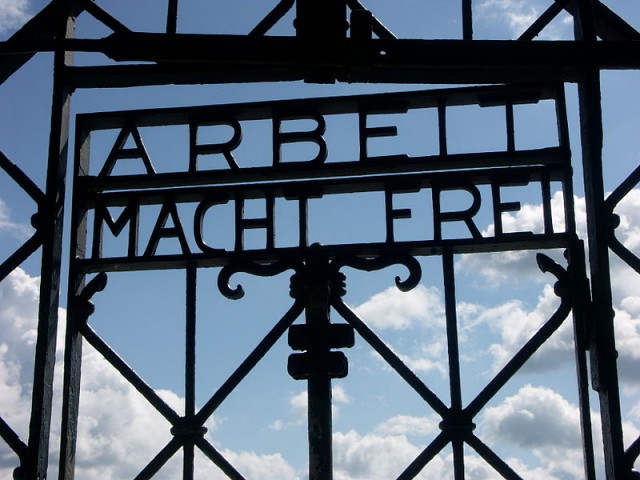 The gate at the Jourhaus building through which the prisoner’s camp was entered contains the slogan, Arbeit macht frei, or ‘Work will make you free.’

SPARKS STOOD near the wrought-iron gate at KZ Dachau’s entrance. He looked again into the camp’s confinement area where the daily roll calls were held. It was surrounded by a high barbed-wire fence, which was skirted on one side by a canal. Sections of the fence were still electrified. To touch it meant certain death.[xxiii]

Where were the inmates? Sparks couldn’t see a single soul in the confinement area.[xxiv]Only later would he learn that inmates were still inside the barracks.  He heard rifle shots, punctuating the strained silence with an almost reassuring familiarity. Then he discovered the source of the firing: his men were shooting guard-dogs in a nearby kennel, which had at one time held as many as 122 “Hounds from Hell”.[xxv] Other than Alsatians and Dobermans, there were Great Danes, boxers, Shepherds and Wolfhounds.  Sparks’ men killed two dozen of the dogs that a former camp commandant, Egon Zill, had trained to attack inmates tied to metal poles.[xxvi]The SS men had made prisoners strip at gunpoint, tied them to the poles and then tapped the men’s testicles with sticks and urged the dogs to jump up and rip them off.[xxvii] When the victims were neutered, the SS roared with laughter and rewarded their hounds with red meat.[xxviii]

The dogs’ corpses now joined human ones littering the camp. Due to a shortage of coal, the SS had not been able to cremate the recent dead. So blue and green-tinged carcasses lay piled in their scores outside barracks and, to Sparks’ utter horror, stacked to the ceilings in rooms near a crematorium.[i]Hundreds had died in the last few days. “Since all the many bodies were in various stages of decomposition,” recalled Sparks, “the stench of death was overpowering.”[ii] [iv] Rocky Mountain News, 29 April 2003.
[v] Felix Sparks, interview with the author.
[vi] Felix Sparks, Regis University interview.
[vii] Felix Sparks, Colorado National Guard interview.
[viii] Rocky Mountain News, 29 April  2003.
[ix] Felix Sparks, interview with author.
[x] Ibid.
[xi] Sidney Horn, interview with Flint Whitlock, 1996.
[xii] William Walsh, interview with James Strong, “The Liberation of KZ Dachau”, 1990.
[xiii] Felix Sparks, Dachau and its Liberation, 157th Infantry Association newsletter, 20 March 1984.
[xiv] Marcus J. Smith, The Harrowing of Hell, University of New Mexico, 1972, p. 285.
[xv] Ibid.
[xvi] Felix Sparks, Regis University lecture, “Stories of Wartime.”
[xvii] Robert Antelme, The Human Race, The Marlboro Press, Nothwestern. Evnaston, Illinois, 1992, p.286.
[xviii] Robert Antelme, The Human Race, The Marlboro Press, Evanston, Illinois, 1992, p.287.
[xix] David Israel, The Day the Thunderbird Cried, 2005, Emek Press, p. 259.  Degro would never forget the scenes that greeted him that morning. “Those scenes at Dachau are impressed on my mind,” he would say over sixty years later. “Sometimes I get up at night and try to erase them, but I can’t forget.” Source: Ibid.
[xx] T. Pauli, Berkenkruis, Newsletter for volunteers of Flemish SS, October 1988. The account in the magazine is based on Linberger’s alleged testimony to the German Red Cross.
[xxi] Dachau and Nazi Terror, 1933-1945, Studies and Reports, Dachau, 2002, p. 34.
[xxii] At a later trial for those accused of the Malmedy massacre, all mention of the killing of SS POWs by Americans was ordered stricken from the record.
[xxiii] AAR, NA.
[xxiv] There was no sign of them. In fact, there were some 32,000 inmates, including over 15,000 Poles and Russians, in all some forty nationalities. Around a tenth of the inmates were Jewish – some 3,000 Jews.
[xxv] Hermann Weiss, Dachau and International Public Opinion, Reactions to the Liberation of the Camp, p. 34.
[xxvi] David Israel, The Day The Thunderbird Died, p.116. “On special amusement days, Zill would have a table of food placed in front of starving prisoners who stood at attention. Should a prisoner relax his body, the dogs would react automatically.” Source: Ibid.  Zill, according to Israel, would die in 1974 in Dachau, having had a life sentence reduced to fifteen years. He in fact died within “walking distance” of the “horror camp” he had once commanded. Source: Ibid.
[xxvii] Dachau and Nazi Terror, 1933-1945, Studies and Reports, Dachau, 2002, p. 34.
[xxviii] Stars and Stripes, 3 May 1945. .