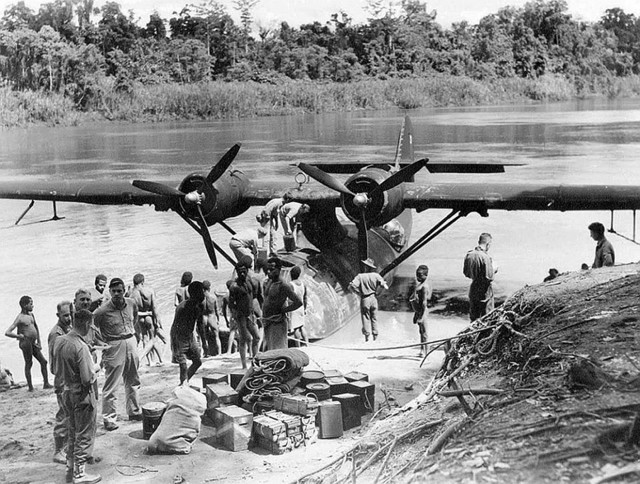 The fascinating photo was taken from a PBY-5 operated by Australian Forces, to supply the Allied war effort in PNG in 1944/45 .

As the Allied Forces advanced in 1944 they pushed back the Japanese Naval invasion armada and Air Force back from New Guinea. That opened the opportunity to start strategic air raids on the Indonesian oil refineries in Borneo , which fueled and lubricated the Japanese war effort in SE Asia and the Pacific to great extend. 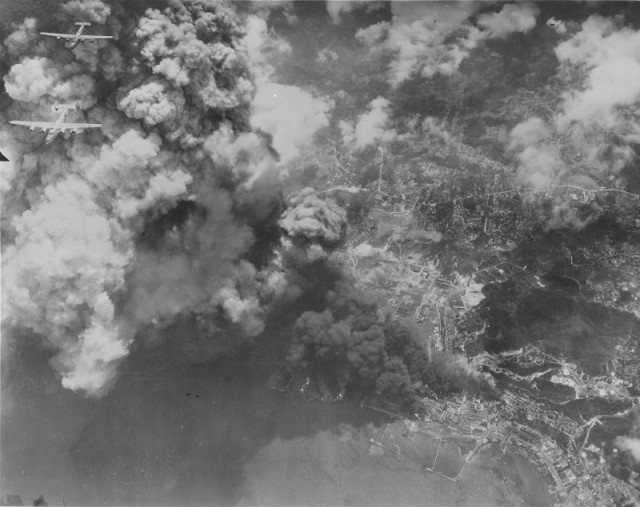 Air raid on Balikpapan with a couple of B-24’s in the foreground that have inflicted near fatal damage on the refinery installations, as oil production for the Japanese ceased by mid 1945..

Air map depicting the route from New Guinea to Borneo, 1300 miles to go and same distance back, flight range stretched to limits all over hostile sea and enemy occupied territory.

With the conquering of the Biak airstrip on the Noemfoor islands (ex-Dutch New Guinea), the largest oil refinery in Indonesia in Balikpapan (on the Eastern coast of Borneo) came in theoretical reach of the American B-24’s flight range. It was nicknamed the “Ploesti of the Pacific”
The Liberator Bombers engaged were specially prepared with stripping of weapons and a fuel saving flight mode was trained with all crews to overcome the 2600+ miles flight path over sea and enemy occupied islands.

In October 1944, the first raid was flown with 120 aircraft, consisting of B-24’s and P-38 Lightnings for protection. 4 more raids would follow, and included later also the B-25 Mitchell and the P-47 Thunderbolt as escorts with drop tanks. They made their epic flights as the longest daytime trajectories ever flown on the legendary B-24s. 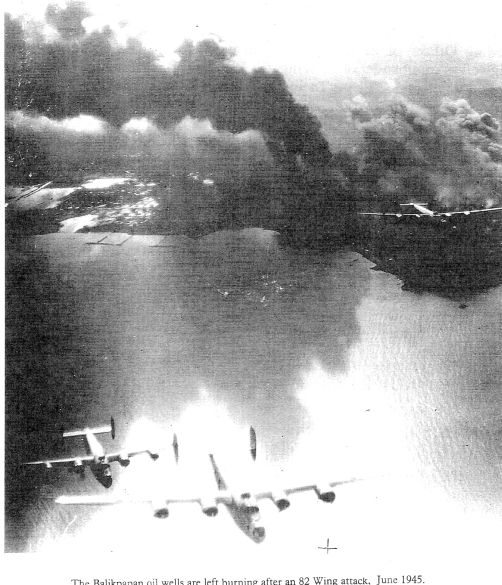 B-24s (seen in the left upper corner) and B-25’s are repeatedly pounding the refinery and port installations of Balikpapan, but the huge storage tanker park ( in lower right corner) is here still intact. In a later raid, this park was also totally destoryed. As a young boy living in Balikpapan by the mid 1950’s, the eerie remnants of that park were my ‘Playstation”.

By April 1945, the last raids were flown and had virtually destroyed the targeted refineries. With additional attacks on the Sumatra refineries, the Japanese oil supply from the Indonesian Archipelago stalled completely. Their reserves plummeted to an alarming rate as the Allied assault on the Phillipine Islands was about to start. The shortage in oil supply seriously began to hamper the Japanese War effort, by then entering the final stage of WWII. 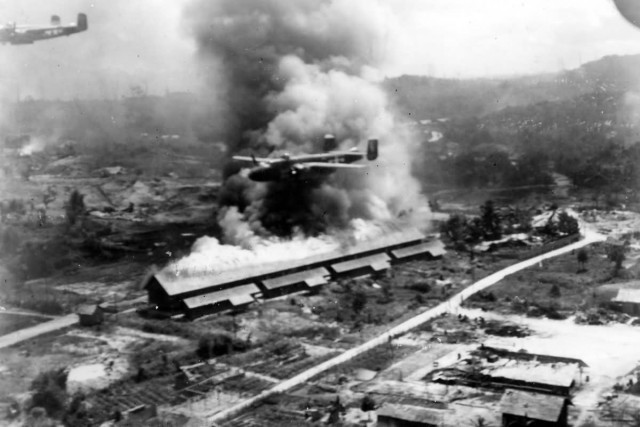 Low altitude raids of B-25’s over the machinery workshop of the Balikpapan refinery. Dangerous flights as the aircraft came within fire range of light AA guns..

There was yet another plane that came to an iconic status: the Consolidated Catalina supported the Borneo air raids by flying Search & Rescue missions to pick up ditched or stranded air crews from the hostile territories and seas. The PBY-5 (flying boat, with no landing gear) and PBY-5 A (Amphibian) were most versatile aircraft with an extremely long flight range that could land at almost any place where there was water. They saved many downed crewmen from the Borneo raids, often in very dangerous circumstances in enemy occupied domain. 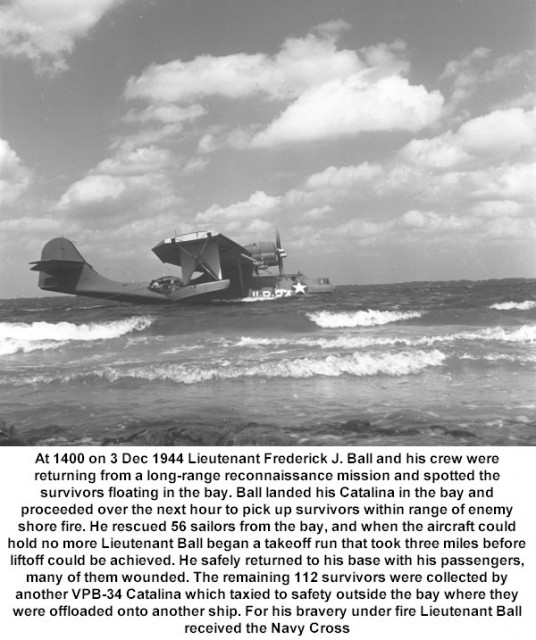 That Catalina, along with the Douglas C-47/ Dakota , was to stay in operations for another decade until the mid 1950’s. Right after the war (Aug. 1945), Anglo-Dutch Oil Company Shell returned to the oilfields, as the World craved oil more than ever.
Shell purchased a number of surplus Catalinas from the USAAF, and operated them to supply the remote jungle locations where the oil was explored, drilled and pumped out to the shore.

As a young kid and son of a Shell engineer, I arrived in the Borneo jungle in 1950 and flew both the Dakota and the Catalina many times with my dad and family. In a time and venue where there was no TV, no Video Games, no Magazine, no cinema, no nothing, no wonder that the aircraft put a spell on me.
Catalinas landed right in front of our house on a side stream of the river Mahakam/ Borneo, where we lived in a small Shell settlement named Sanga Sanga. As the plane came over, she first made a low fly pass in order to clear the river from small boats, In a majestic orbit, she lined up for a water landing and I stood there watching in awe as a 6 year old boy, totally mesmerised by the spectacle of the splashing water and the ensuing mooring on the muddy river bank.

The view on the photo nr. 1 comes very close to what I encountered there, with the locals running around for the awkward unloading of passengers, spare parts for my dad’s machine repair facility and mail from faraway Holland. Read the stories and see the photos in my book, 320 pages and 250 photos packed with my odd, adventurous and unbelievable experiences with the Catalina and the Dakota.

The love for both the Dakota and Catalina never faded from my mind, and I was most fortunate that I could later turn my passion into a dream scheme. As a creative director of a large International Corporation. I had the ultimate opportunity to bring my memories back to life in a consumer contest/ TV series that involved the

Catalina twice in a 6-weeks trans-atlantic flight. In 1993 and 1994, I organised the Catalina Odyssey, of which you can see a series of most fantastic photos at: http://www.michaelprophet.com/News_articles/News_articles2012/PSTravel.html..

Soon more about those epic voyages on War History Online and on my Facebook page www.facebook.com/hans.wiesman 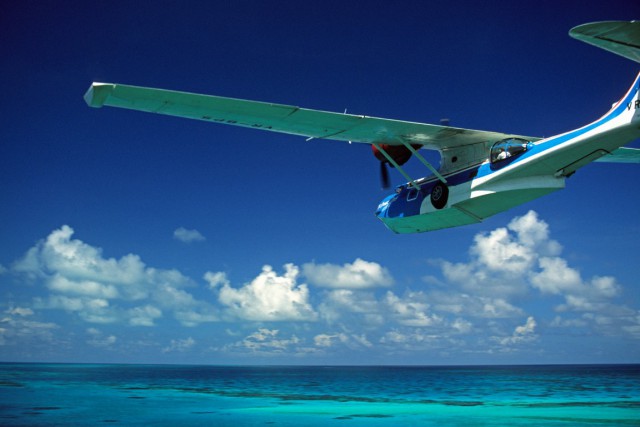 Epic flight of the Plane Sailing Catalina PBY-5A in Summer 1994, over the Bimini Islands, with Capt. Paul Warren Wilson preparing another fabulous waterlanding.

See for the Summer edition of the UK magazine “Catalina News” www.catalina.org.uk, a most interesting Magazine that tells illustrated stories of WW II Catalinas and about the more recent voyages of their flying PBY-5A!

Their Editor David Legg has written a review of my book The Dakota Hunter in the Mag’s new summer 2015 issue:

“Author Hans Wiesman is well known to us at Plane Sailing Air Displays Ltd as, back in the 1990s, he arranged to use our first Catalina to fly the Catalina Odyssey from Europe to South and North America, having used another Catalina – Z-CAT – for the same purpose in the previous year, 1993. Hans spent much of his life travelling the world and getting involved in all sorts of exciting activities that enabled him to indulge in what by then had developed into a huge passion – Dakota hunting!
Hans Wiesman’s recently published book The Dakota Hunter starts as a childhood and early-career biography before describing his later activities after leaving the Rothmans Group. Divided up into regional chapters, the reader is taken from Europe to the USA and US Gulf States then to exotic and often remote locations in Venezuela, Honduras, Bolivia, Colombia, Madagascar, Thailand, Alaska and the Yukon where Hans sought out many out of use and often derelict Dakotas, encountering all sorts of adventures and scrapes along the way. He has recovered airframes and components from all over the world, often transforming them into very collectible objets d’art. The fully illustrated book tells this story in an engaging and interesting way without resorting to masses of technical data and production tables etc although be prepared for many photos of seriously damaged and neglected Daks! – although Hans loves pristine aircraft, his rationale is to seek out the less-loved examples before they have all gone. There have been countless publications on the Dakota family of aircraft over the years but Hans’s book, published by Casemate UK Ltd, is unusual because of its subject matter. Well worth acquiring, it costs £19.99 in the UK and is ISBN number 978-1-61200-258-3 (a digital version is also available).

You can also sample what the book is about by going to www.dc3dakotahunter.com where you can directly order the book at Amazon UK/USA, Barnes & Noble, Casemate or in an autographed version via Hans’ website shop.