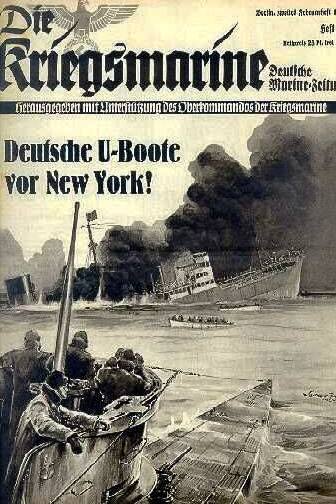 German Kriegsmarine Magazine, Propaganda announcing the U-boat attacks on the NY harbor
They came close, but the announcement was too optimistic. With the rapid advance of aircraft carried Radar and more efficient hunting methods, the U -boat’s heydays were over by mid 1943. 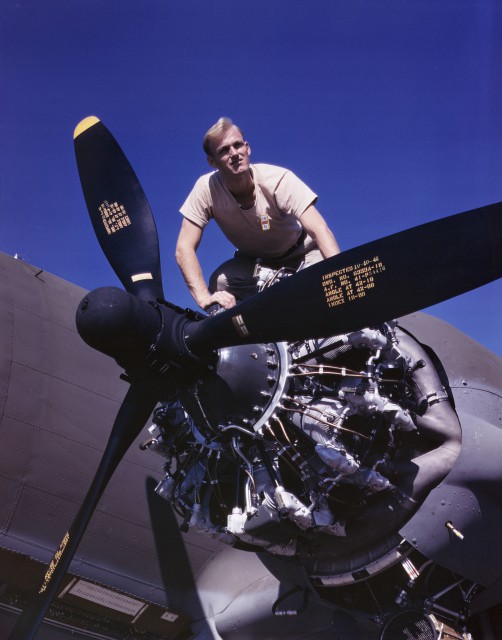 This beautiful picture of a C-47A Skytrain seems ‘staged’ and may have been part of an ad for Douglas, Pratt & Whitney or Hamilton Standard. Nevertheless, a classic full color shot of the wartime production, notice the matte black propellers with yellow tips, done to prevent reflection and detection. 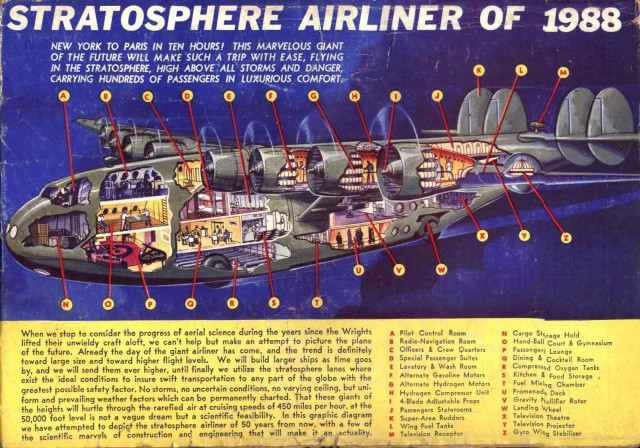 This photo was published just before WWII in 1938 and predicted the progress of aircraft 50 years later. Read this with care, it is most amazing stuff. Gasoline of Hydrogen engines?. Look at no. V in the scheme, that is the Gravity Nulllifier Rotor. The what..? If you have a clue, let me know, please 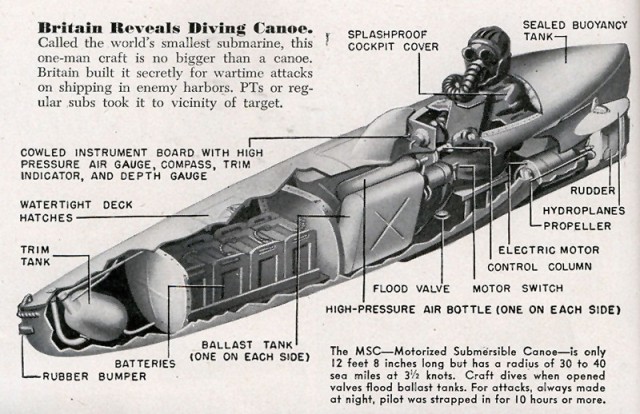 We knew about Japanese and Italian mini subs, but also the Royal Navy built them under the strange name MSC or Motorized Submersible Canoe. The drawing does not tell where the explosives were kept. The 10 hours dive must have been a chilling experience for the pilot in every aspect! 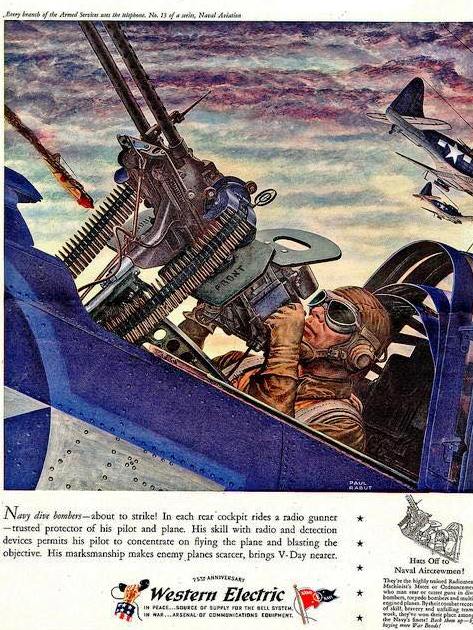 Fabulous illustration of war engagement in a Western Electric Ad. The Company was evidently involved in the war supply production and their ad campaigns depicted drama with patriotic themes in the sphere as the War Bond posters (see posters below). 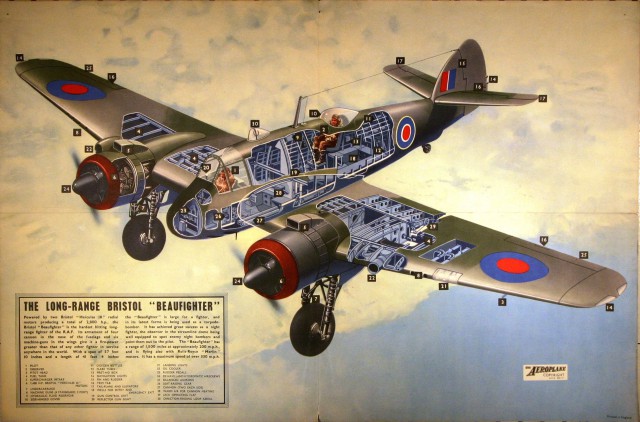 One of the less known WW II Allied fighters, but it served to full satisfaction in many theaters of war, flown by RAF and RAAF. A rugged stubby nosed aircraft that acted in a variety of roles, as diver bomber, interceptor, tank buster, U Boat patrol, etc. and could carry a large Torpedo or under wing rockets to deliver a ferocious bite. Nicknamed by the Japanese as the ´Whispering Death`. 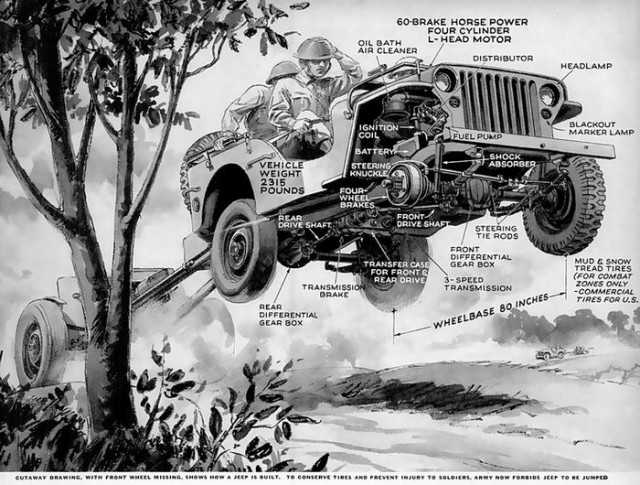 The legendary Jeep, built by Bantam, Willys and Ford by the hundreds of thousands.
The versatility as soldier transport, howitzer tug, Machine gun platform, etc. made it one of the most built transports in wartime and beyond! This drawing shows a `cutaway view` of the Jeep , the missing front wheel is for the purpose of tech insight. Otherwise, after such Monster truck style jump, the soldiers in the jeep would experience a harsh landing with a sudden stop, lol. 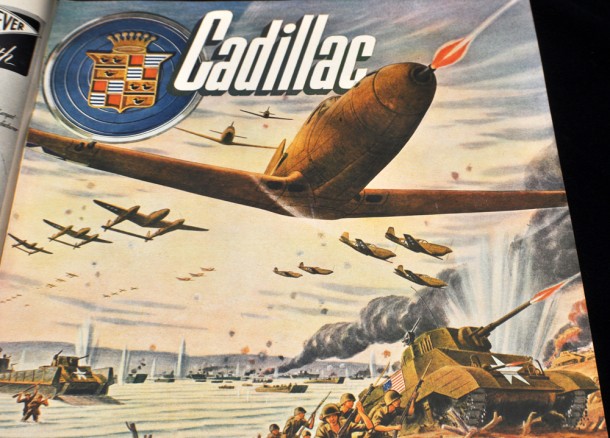 Cadillac Ad. An impressive patriotic poster with an atmosphere expressing the mighty military and industrial power of the USA. Cadillac was supplier for many parts of the war machine including engines for tanks, aircraft and trucks. 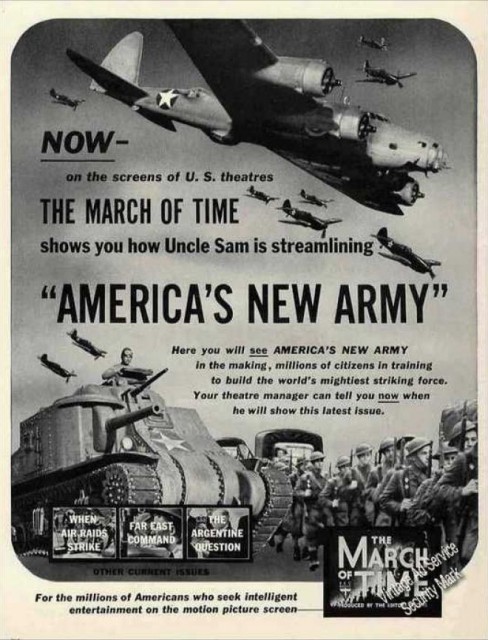 The public information system, that delivered the news of the war including the Movies. Those were part of the “propaganda”, but that term was mainly used in a negative way for misleading enemy information. 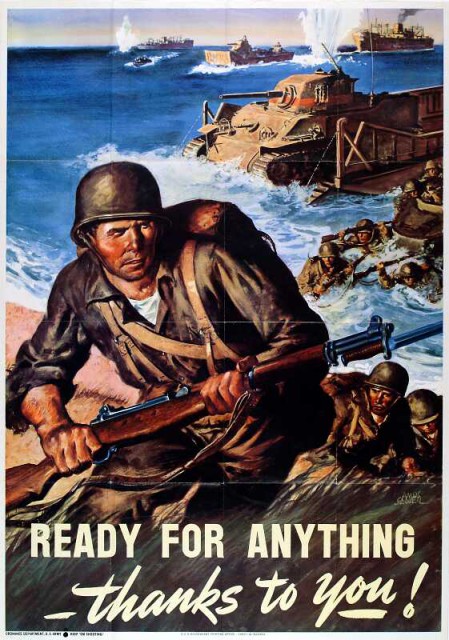 Ready for anything. An invasion landing that could have taken place in Europe or in the Pacific.
With a lack of colored photographic material, the artists who made those illustrations normally for film posters surely had a busy time now with those war posters. 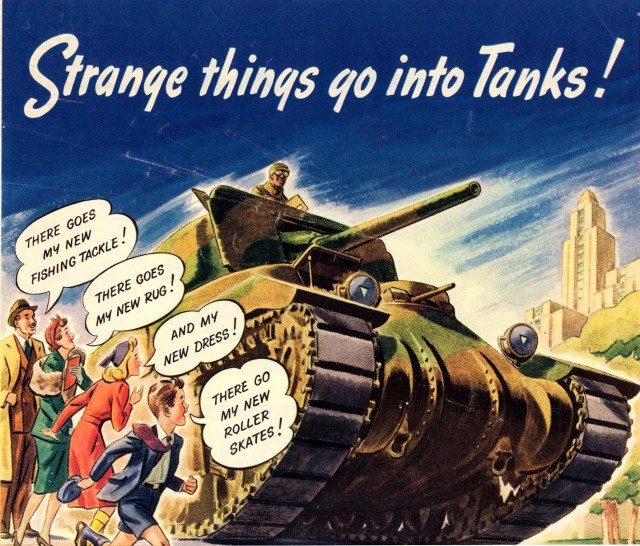 Another magnificent poster, expressing and justifying the industrial switch from civilian products to weapons, aircraft and transports. The eventual short supply of consumer goods had to be explained to the public. 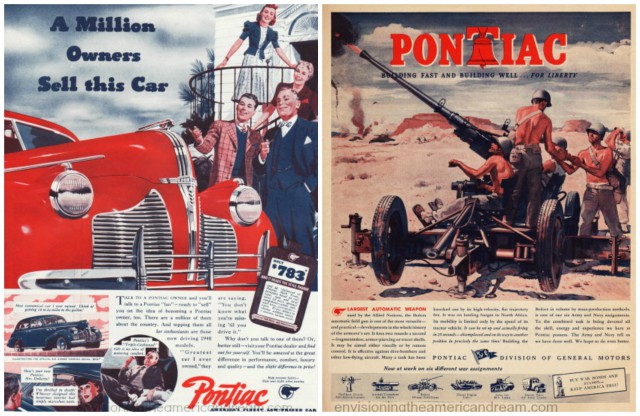 Pontiac also took its fair share of war materials production. Those particular ads showed their dual status as car builder (as from $ 783) and AA guns constructor: Building fast and building well.. for Liberty! 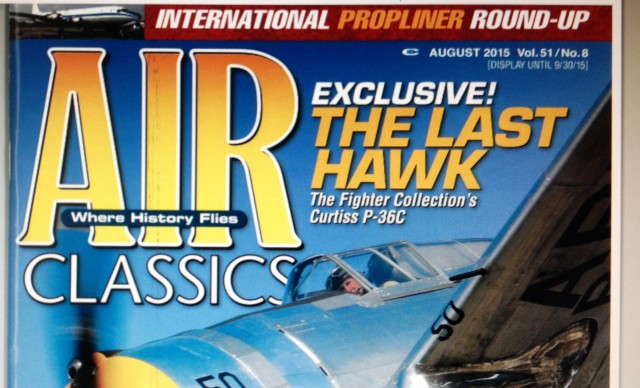 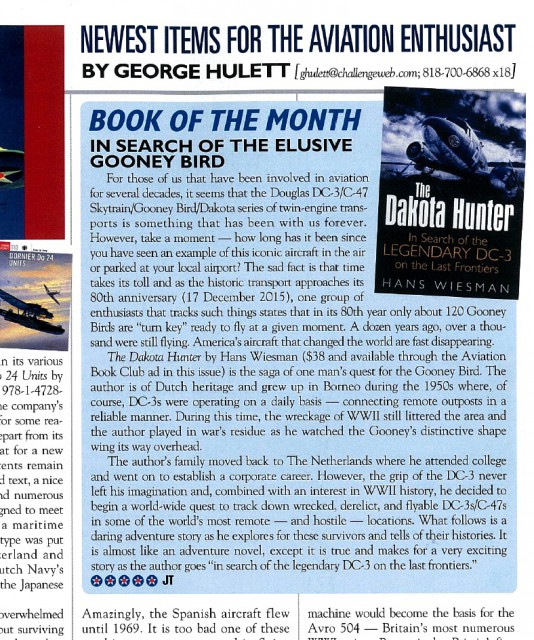 Air Classics Magazine issue Aug.2015 . If you like the WWII posters and ads, there is a new book on the market that reflects the same atmosphere of the “Icons of Victory”.
This Aug 2015 issue of Air Classics Magazine comes out with their “Book of the Month”. They selected my book “The Dakota Hunter” with a 5-star rating, classified as “a Must for every Aviation Library”.
You can read Air Classics’ most positive review here on top in the blue colored frame: “It is almost like an adventure novel, except that it is true and makes for a very exciting story….”

Just in case you still might have some doubts, you can take a sneak preview into my book of 320 pages and 250 never before published photos. For that, go see www.dc3dakotahunter.com

Click the button HOME that you see on top of this page in the black upper bar and scroll down into the photo of the crashed Yukon C-47. On the next button “ORDER the BOOK” you can order the book directly with a mouse click at Amazon USA/ UK, Barnes and Noble, Bol.com and other online shops with worldwide delivery. Also an autographed version is available in the web shop. 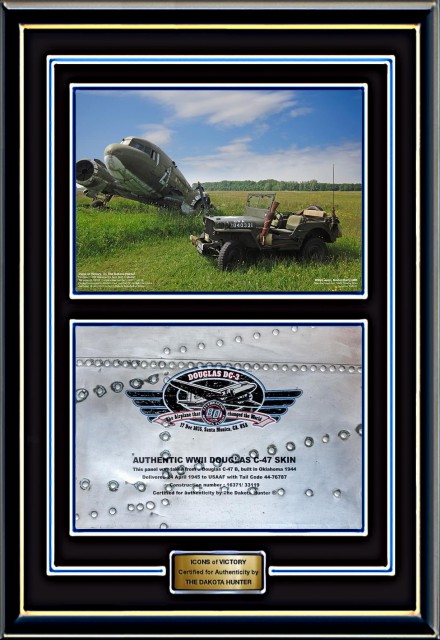 You can soon own your own part of a War Bird Relic with this Commemorative Placard. In the lower part of this frame is an authentic skin panel, taken from the C-47 depicted in the top photo.
The skin panel is decorated with a fine logo, “Celebrating the 80 years Maiden flight of the Douglas DC-3”. The photo in the same dimensions (11 x 16 inches/ 28 x 40 cm) depicts that same C-47 from which the skin plate has been taken (built Oklahoma, 1944), along with a Willys Jeep (1942). The frame is at your own choice best to fit in your interior, Dim. appr. 24×36 inches/ 60×90 cm

This is a Limited Pre-Series, issued with a numbered certificate on your name and both the Photo and the Placard are signed by myself as being owner/ supplier of the C-47 depicted.
In case of interest for this very special and limited offer to own your original and stylish piece of Aviation History, you should contact me at hans@avionart.com or via www.dc3dakotahunter.com