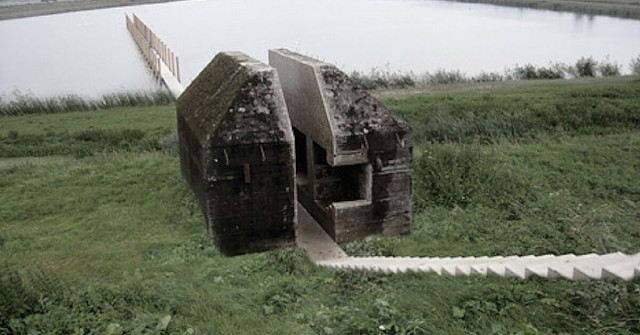 Bunker 599 located in the Netherlands was cut in half and has been turned into an artistic war memorial.

Originally built in 1939, the bunker was supposed to hold up to 13 soldiers during bomb raids. It was one of the (many) small hiccups in the New Dutch Waterline. This was an expansive series of water-based defenses that dated all the way back to 1815. With the help of Dutch Studios RAAAF and Atelier de Lyon, the bunker was able to be split in the middle. This has created a unique war memorial for World War II.

In May 1940, German airborne troops captured the southern approaches into the heart of “Fortress Holland” by surprise — the key points being the bridges at Moerdijk, Dordrecht and Rotterdam. When resistance did not cease, the Germans forced the Dutch into surrender by aerial bombing of Rotterdam, and threatening the same for Utrecht and Amsterdam. Stairs now pass through the open bunker, leading to a wooden boardwalk raised above the flooded area.
“The pier and the piles supporting it remind them that the water surrounding them is not cause by e.g. the removal of sand, but rather is a shallow water plain characteristic of inundations in times of war,” Rietveld said of the project. Looking up to the bunker across the bridge It looks great in the snow too!