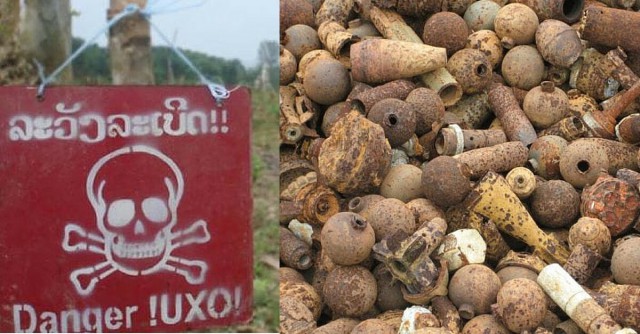 Even though the Vietnam War ended over 30 years ago, its legacy is still being felt by the people of Laos. Around 50 people are injured or killed every year by unexploded ordnance left in the countryside of Laos.

At the Cooperative Orthotic and Prosthetic Enterprise (COPE) centre in the capital of Vientiane, prosthetic limbs, including legs and arms, continue to be made for the injured and wounded. In the entrance to the centre, one hundred cluster bombs are suspended from the ceiling as a reminder of the deadly landscape that still affects the people of Laos. 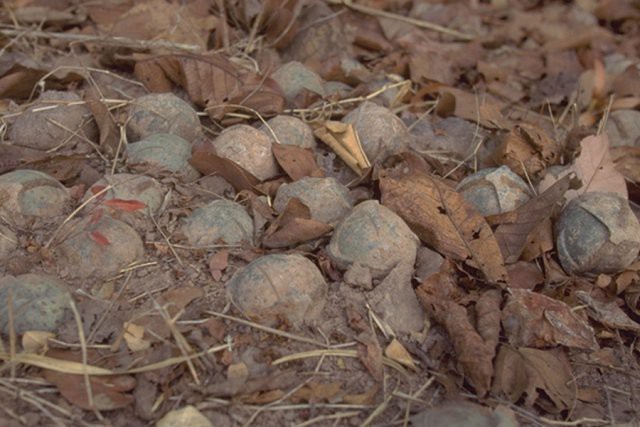 During the last ten years of the war, more than half a million bombing raids were undertaken by the US military over Vietnam, Cambodia and Laos. Laos became the most heavily bombed country per capita in the history of military warfare.

From 1964 to 1973, the U.S. dropped over 2 million tons of ordnance over Laos in 580,000 bombing missions, the equivalent of one planeload every 8 minutes, 24 hours a day, for 9 years.  At least 270 million cluster bomblets were dropped as part of the bombing campaign; approximately 80 million failed to detonate.

With the sheer mass and quantity of bombs, it isn’t surprising that a lot off unexploded ordnance still litters the countryside. It is reported that about a third of the total two million tonnes of bombs that were dropped on Laos were unexploded, leaving a live minefield for the locals to navigate.

All 17 of Laos’ provinces contain unexploded ordnance and around a quarter of Laos’ villages remain affected. Since the US stopped bombing the country, around 50,000 locals have been wounded or killed by the bombs. 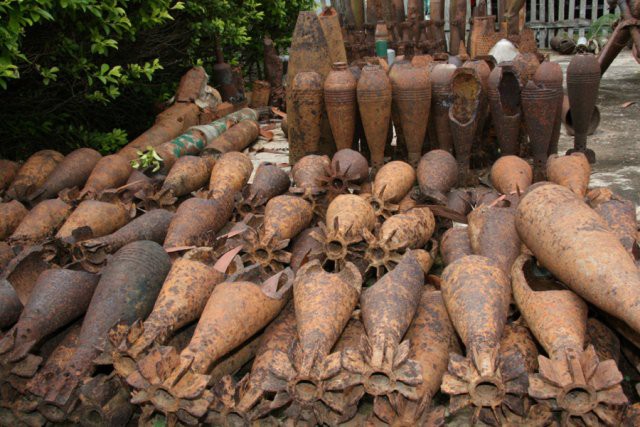 Over the past two years there have been over one hundred new casualties each year. About 60% of accidents result in death, and 40% of the victims are children. Boys are particularly at risk.

COPE was established in 1997 as a charity for helping the victims of unexploded ordnance.  They provide prosthetic devices and other kinds of rehabilitation services. Prosthetic legs are the centre’s speciality, and they can be found all over the centre, ready and waiting for the next victim.

The centre now also supports victims of traffic and industrial accidents, in addition to people suffering from diseases such as leprosy, polio, and those who have had strokes. But about 35% of the centre’s patients are treated as a result of the detonation of previously unexploded bombs.

Between 1995 and 2003, the US gave monetary assistance and people-power for clean-up efforts, but it did not sign the treaty that prevents the use of cluster bombs.

The following two organisations are working to help the people of Laos, you can help too: