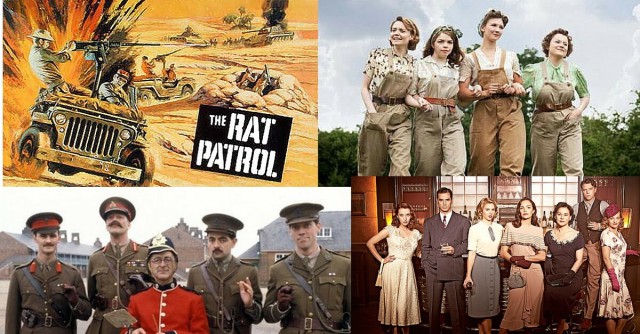 For whatever reason, some of the best shows on television are canceled, short-lived, or never reach syndication. Some do but fizzle out after a few years.

This list looks at shows that either didn’t reach wide audiences when they were first run, didn’t survive in syndication to modern times, or just didn’t last as long as fans really wanted them to.

This sweeping saga of a documentary series aired from 1952-1953. In 1954, the series as a whole was shortened into documentary film that would be shown now and then on television throughout the next two decades. Its orchestral musical score was so well received that a soundtrack was made and sold on record albums.

In 26 episodes, Victory at Sea covers naval battles but does not ignore the land war. Each episode has a theme or centers around one event. The stories are told with real footage with the backdrop of emotion awakening music.

Lt. Charles Hennesey, also known as “Chick”, is the focus of this early sitcom that ran from 1959-1962. Hennesey, played by Jackie Cooper, is a Navy doctor stationed at a hospital near San Diego. Each episode features a new case and the series as a whole plays up the evolving romance between the doctor and his Yeoman nurse, Lt. Martha Hale, played by Abby Dalton.

The show only ran for three seasons, but gave the world of television the device of starting the dialog and action during the opening credits and also featuring cameos frequently. In its three-year run, 46 guest stars and cameos appeared on the show.

This predecessor to The A-Team was based on truth. During WWII, soldiers from Britain, New Zealand, and Rhodesia formed the Long Range Desert Group that patrolled the deserts of North Africa. The real life soldiers were nicknamed “desert rats”.

The TV version included four soldiers – three American, one British. Britain was so offended that the BBC pulled the show from British airwaves after six episodes. American audiences loved it, but along with the British, vets from other countries were annoyed with inaccurate costume choices and other mistakes.

What was important about the show, aside from its great entertainment value, was that it brought the knowledge of the real desert rats to a public that was mostly familiar with the European conflicts during WWII. The Long Range Desert Group worked with other special forces groups and secret agents and were influencers of the SAS and Delta Force. The Rat Patrol may not have been accurate, but it brought the North African war operations to life for uninformed audiences.

Tales of the Gold Monkey

Tales of the Gold Monkey technically takes place in 1938, before the U.S. entered WWII.

The pilot of the Cutter’s Goose is an ex Flying Tiger, Jake Cutter, played by Stephen Collins. His lady love, an American spy masquerading as a nightclub singer, Sarah Stickney White, keeps him informed. Jake’s trusty sidekick is his eyepatch wearing Jack Russel, Jack who barks twice for yes and once for no.

Flying about the South Seas in a cargo plane, the hero and heroine of the show are continually trying to outwit German spies from endangering the world and stealing important treasure.

Although audiences in the U.S. and Britain loved the show, the budget was far too expensive to carry the show into additional seasons. It only aired for the 1982 season.

While Black Adder is certainly a cult favorite in America and quite popular in Britain, it makes the list because of the limited audience aware of it in the United States. It only aired originally in the States on public television in the very early hours of morning just before station sign off.

Black Adder as a show had four seasons that each took place in a different period of history. One of those was set in the trenches of the first world war.

The WWI season, like all seasons, spotlighted the Black Adder’s (played by Rowan Atkinson) misadventures with comedy offset and enhanced by his sidekick Baldrick (Tony Robinson).

Although the show is most definitely a comedy, it had its poignant moments and increased awareness of the terror of the First Great War.

While set in 1945 after WWII, this series took an interesting look at how the war affected both the soldiers and the folks at home.

When the men do or don’t arrive home, the women leave the factories, and foreign brides arrive pregnant and widowed, what happens? The show explored how relationships begun before the war changed, how people changed, and what was done in the early days of recovering from the war.

The show only ran for two seasons, from 1991-1993 even with critical acclaim and many adoring fans.

Land Girls followed the drama of a group of fictionalized members of Britain’s Women’s Land Army, a real life civilian organization formed by the Board of Agriculture to take over farming abandoned when the soldiers went to war. At first, the women were volunteers, but later their ranks were supplemented by drafting.

The Land Girls of the television series all come from varying backgrounds and end up working on the estate of the Lord and Lady Hoxley. All parties must adjust to not only the war itself but the new social dynamic in which they find themselves.

The series aired from 2009 -2011 on BBC One in the daytime lineup, winning several awards.

This Canadian series tells the story of women working in the munitions plants of Canada during WWII. From women who really needed the money to girls working as their contribution to the war effort, the series shows how these women were affected by the war, what it was really like to work under dangerous conditions, and how the country at large dealt with cultural change.

Beginning in 2012, the show ran for two seasons ending in 2013. The fans of the show as it aired and those gained through Netflix and other means are still petitioning for its renewal, touting its awards and acclaim as reasons to bring it back.

Running for a good long while in Britain, from 2002-2015, Foyle’s War is still not well known in the U.S. It centers on the investigations of a British detective trying to control the chaos of WWII era Brits that are committing crimes amidst the confusion.

Due to its long run, the series could not stretch out a historical war and so in later episodes, Foyle works with Mi5.

Military buffs and lovers of quality television should tune in now to ensure that ratings bolster the future of this Revolutionary period drama.

This show, based on the book by Alexander Rose, is about friends living in New York state that form the Culper Ring, a group of spies that assist General Washington.

Though the series takes liberties with historical fact at times, it had support as entertainment and was given an award by the Daughters of the American Revolution.