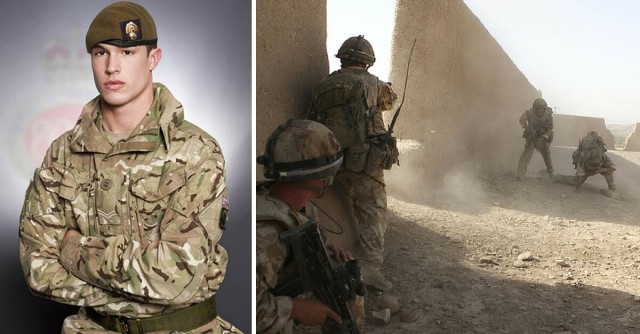 Not all war stories have a happy ending and, in fact, one might make the case that most do not. This is ever truer when you start talking about those who have earned any nation’s highest military honors for inexplicable gallantry. Such is the case for British Lance Cpl. James Ashworth of the Grenadier Guards in Afghanistan.

When a Taliban sniper team wreaked havoc on the countryside, Lance Corporal Ashworth and his team were sent in to take them out. This required heavy fighting, fortitude in the face of fire, and for Ashworth, crawling within meters of the sniper to take him out with a final grenade.

Unfortunately for Ashworth, this action would take his life, but he would receive the Victoria Cross and the highest esteem of a long military tradition that said the British will fight until the very end.

At the age of 17, Ashworth joined the British Army in keeping with his father’s footsteps who had previously served in the Grenadier Guards. Growing up, Ashworth always displayed excellent athletic abilities that would serve him well in the military. He would initially be posted to Nijmegen Company Grenadier Guards which typically had a traditional ceremonial role.

However, Ashworth was born to fight and was quickly recognized that this was the type of man you wanted beside you in combat, not a ceremony. He eventually became a paratrooper and was assigned to the Guard’s parachute platoon as part of the Third Battalion, Parachute Regiment.

With the British military fully engaged in Afghanistan, he would get his opportunity to serve in the thick of the fighting and prove he belonged among the ranks of the British Paratrooper.  The paratroopers have a long tradition dating back to World War 2 when they were fighting for survival as a nation, and that fighting spirit has not left them since.

Having served in the military since 2006, it would be a 2012 deployment that would lead Ashworth to rise above the ranks of the common and into the hallowed halls of the Victoria Cross recipient.

This deployment would take him to Helmand Province Afghanistan, which was the scene of some of the fiercest fighting of the entire war. While the NATO troops could routinely take any territory they wished, it rarely held for long without a continual presence as the Taliban would seem to rise from the ashes and give them a fierce fight.

The vicious fighting in Helmand province would gift many awards to those who fought there by virtue of the sheer nature of what it took to hold this ground. And when an enemy sniper team threatened the hard-fought gains of those who fought there, a rendezvous with typical British resilience and aggression was warranted.

Getting Close to the Fight

On June 13, 2012, as part of the reconnaissance platoon of the First Battalion, Grenadier Guards, Ashworth’s team was sent to take out the dreaded sniper group that had been firing upon British soldiers for days.

Order to capture or kill, with the latter being preferred, Ashworth and the Guards inserted near a village in the Nahr-e Saraj district of Helmand.  As soon as they landed, heavy fighting broke out as firefights lit up throughout the village.

Taliban fighters were racing in to support their beloved sniper team, and a vicious fight was inevitable.

Moving from compound to compound, Ashworth and the Guards searched for the snipers and fought off any who would stand in their way. The sniper team eventually retreated to a walled compound where they were then boxed in and ready for the assault.

Since devastating the compound with airpower was not an option, it meant that the guards would have to get up close and personal with their enemy. Moving from building to building and room to room, Ashworth and his team use grenades to flush out the enemy killing several of the dreaded sniper team in their wake. But it would be one final sniper hold up in a small outbuilding that would prove the most tenacious to evict.

The firefight for this particularly entrenched sniper reached a stalemate as Taliban fighters began to flood the village in greater numbers. Realizing that the initiative must be seized and the fighter eliminated before the situation grew grimmer, Ashworth volunteered to crawl among the low wall that would take him within meters of the enemy in order to throw a final grenade.

Being confident in his athletic ability to land the grenade on target, Ashworth pushed his face to the ground and for several minutes crept forward with very little cover amidst the heavy fighting.

Coming within 5 meters of the enemy as the time for action began to run out, Ashworth prepped a grenade when a random bullet pierced his armor knocking him to the ground.

A Hard Scene to Watch

Those supporting Ashworth’s approach watched in horror as the bullets riddled the ground inches from Ashworth. However, it became clear that Ashworth was undeterred until the very end. The grenade which he had just prepped under heavy fire had fallen unfortunately beside him and, in the end, took his life.

It was a dangerous mission from the beginning, but one that simply had to be done. And while there is no happy ending where Ashworth’s final grenade took out the enemy, his brothers in arms eventually flushed out the sniper and offered a little retribution for Ashworth’s death.

For his actions that day, Lance Corporal James Ashworth would become only the 14th recipient of the Victoria Cross since World War II. The sniper team was neutralized, and those who witnessed Ashworth’s bravery observed history in action.

Had it not been for Lance Corporal Ashworth’s decisive action under heavy fire and at great risk to his own life, the fight in a small Afghanistan village would’ve dragged out and potentially worsened as additional Taliban flooded the streets.

There is no happy ending apart from the fact that the entirety of the British military can look to Lance Corporal Ashworth and salute the fact that he honored the tradition of those who have gone on before them.