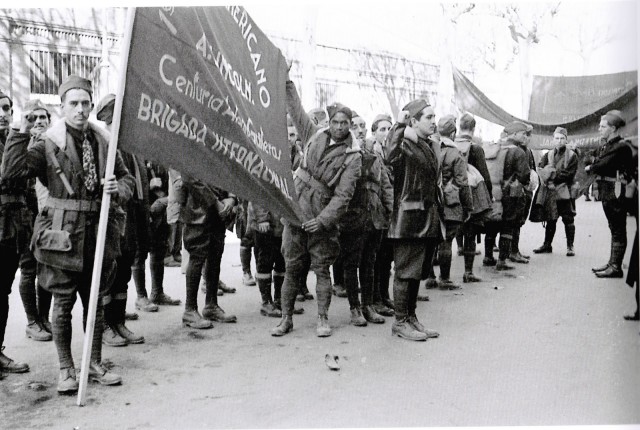 Delmer Berg, born in 1915, into a tenant farming family living near Modesto in Southern California, he has lived his life to the fullest. He took the side of the underdog and never backed off from a fight.

When he was 21, working as a dishwasher, he was walking in the street in Hollywood when he noticed a placard, reading “Friends of the Abraham Lincoln Brigade”, pasted onto a building. He made a split second decision and marched inside saying that he wanted to go to Spain.

The Abraham Lincoln Brigade was made up of volunteers from the United States who went to fight on the side of the Spanish Republican Forces against Franco’s Fascist Forces during the Spanish Civil War. The Lincoln Battalion was the 17th Battalion of the XV International Brigade. This brigade was made up of many nationalities as the Republicans had appealed for assistance all over the world. The men that made up these brigades served as soldiers, medics, technical staff and aviators during the war.

Berg discovered that he had not found an open recruiting office, but was told that though they could not send him, they would direct him to the right place.  After several meetings and eventually a cross country bus that conveyed him to New York,  he joined other volunteers on an ocean voyage to France. From Paris they took an old wreck of a  bus to a drop off point near the Spanish border.

Berg, admits that when he left for Spain he was a political virgin, all naivety and illusions and little else.   With his previous military experience, he was posted to a regiment whose responsibility was laying communication lines from the Republican bases in the rear to the front line. Working near Barcelona for a while, he was later transferred to Teruel, where he was part of the Battle of Ebro and was one of the men assigned to destroy the bridge over the river as the Fascists used it as a link to the Mediterranean Sea.

From Teruel he was transferred to Valencia where he found a great deal of idle time on his hands as most of the communication lines were already installed. The Germans supported the Fascists during this war and they used it to test many of their ‘Blitzkrieg’ theories, including the use of indiscriminate heavy bombardments.

In August 1938 he was asleep in the dormitory of a monastery, when Italian bombers dropped bombs on the monastery instead of their intended target, a nearby railway station. It was a standing joke within the brigade that the safest place to be was where the fascists wanted to bomb as they always missed. In the attack Berg was injured by flying shrapnel with one piece lodging in his liver to the day he died. Of the almost 3,000 young men that surreptitiously shipped out to Spain to support the Republican cause nearly 700 died in combat or of their wounds.

Franco effectively won the war in 1939 and he installed a repressive regime that ruled Spain with a tyrannical hand until 1975. Berg left Spain in October 1938, regretting that he had not played a more active role, but content that he had played a part, no matter how small. Whilst in hospital in Valencia he met a group of Americans that had formed a branch of the Communist Party. He joined immediately, attracted by the values of the party.

Berg was a member of the left-wing all his life and he staunchly supported their causes. In the mid-1950s Berg was a member of the Stanislaus County branch of the NAACP. Berg attended a meeting and being the only white person present he was elected the vice-president! Berg was so broke at the time that the members had to loan him the $5 joining fee.

Before being elected as vice-president Bberg had helped the branch sue the Stanislaus Sherriff’s Department over the assault of a black prisoner, who had been incarcerated for a bad cheque, for over a year. Berg patiently sat in the Sherriff’s office, refusing to be intimidated by a Deputy with a revolver,  and he stayed until the Sherriff returned so that he could serve the necessary papers on him. Within a month the Sherriff had retired and two members of the staff had been dismissed. It was a salient victory for the black community.

Berg was a member of the Communist Party during the McCarthy era when membership of this organisation was fraught with difficulties. When asked if he had ever been questioned by the House Un-American Committee, he said that they could never find him to issue a summons so he never attended any of their sessions. He laughed when saying that the FBI would not come and question him as he was living, at that time, in a trailer in the black community so the FBI left him alone!

Berg also served as a member of the Agricultural Workers Organizing Committee. He was proudly one of the three members that testified in Washington regarding the working conditions of farm labourers.

Berg staunchly supported all his left-wing causes and demonstrated against both nuclear weapons and the Vietnam War. When asked, what was the proudest moment of his life he replied, “When I was elected vice president of the local NAACP, and when one of my grandsons was valedictorian at his Oregon high school graduation and said in a newspaper interview, ‘My grandfather is my inspiration. He’s a Communist!’”

Berg rued the fact that he was getting older and in an interview with The Union Democrat in 2007, he said that his hearing was poor and it made it difficult to attend meetings and contribute to the discussions on the topics close to his heart. The most recent of his causes was the fight for national health care and against the privatization of Social Security.

Last year the New York Times interviewed him and he was saddened by the fact that he was 99 years old and feared that he was running out of time to accomplish all the things that he still had to do. Berg died on the 28th February 2016. This was a man who lived by his beliefs. He was a staunch ally to those he supported and an equally staunch adversary to those he did not. Whether you agreed with his politics or not you have to admire his commitment and his moral fortitude.