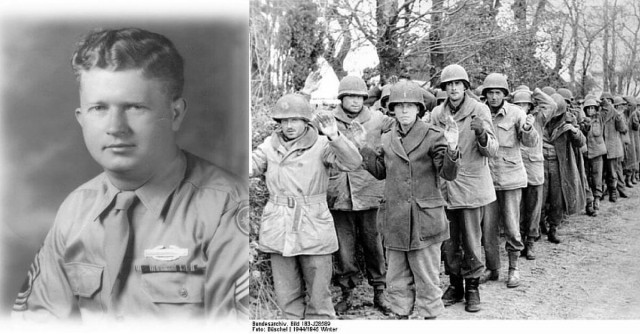 Perhaps there is a point in a soldier’s life, where he is so certain that he might die that he would rather dictate the terms of such death on high moral and gallant grounds than have it occur in a manner that betrays his fellow brothers in arms.  This is the familiar story of those in World War 2, where storming the beaches of Normandy or Iwo Jima on the first wave surely had to produce such thoughts.

Yet, for a few men there would come a time where such a decision would be theirs and theirs alone with survival on one hand and certain death on the other.  This is the story of non-Jewish Master Sergeant Roddie Edmonds who with a Nazi gun to his head refused to give up Jewish POWs and instead declared with gun to head, “We are all Jews here.”

The Constant Revelation of History

Countless stories crucial to completing a fascinating historical war record are lost to time and the death of those who could give first-hand accounts. Fortunately for the world, there were still multiple men who could testify to this account and with such a high degree of certainty that the State of Israel would recognize Master Sergeant Roddie Edmonds’ sacrifice.

By 1945, the treatment of the Jewish people by the Nazi state was becoming more and more clear.  Atrocities the world knew of and those we did not were being revealed with each square mile of Europe retaken.

American soldiers had long been told of the German treatment of Jews and were told if captured to destroy dog tags or identification that would mark them as such.  For Russians on the Eastern front, if they were captured and identified as Jewish they were often if not always sent to extermination camps.

However, that practice had made its way to the Western front as well although these POWs were often sent to slave labor camps where the odds of survival were very low.

This was an unfortunate fate that would meet many who fought the Germans in the last year of the war.  But for a group of prisoners of war detained at Stalag IXA, a different fate would await them.  For there was a senior NCO in charge who rallied the men of that camp to invite certain death upon themselves in order to protect the few who would be destined for an unspeakable fate at the hands of Nazi Germany.

Life as a German POW

For Master Sergeant Roddie Edmonds, the Reich’s last ditch offensive at the Battle of the Bulge would unfortunately end his war by putting him in the hands of the enemy.   Edmonds served with the 422nd Infantry Regiment in Europe and when captured, found himself as the senior NCO among the Prisoners of War.

For all the chaos that was World War 2, there was a pretty regular attempt to maintain military discipline within prison camps and that would often put senior leaders in charge and responsible for representing the men to their captors.

In January of 1945, an order came out for the Jewish POWs of Stalag IXA in Germany to fall out in the morning for an undeclared fate.  For Edmonds this put him in an awkward position as to whether to ensure the order was followed as directed and risk a few men, or defy the Nazi proclamation and risk them all.

And while history won’t record how Edmonds came to such a decision, it would vindicate him as a hero of World War 2 and in keeping with the best traditions and spirit of the United States Military.

In the morning when the German officer in charge came to collect the Jewish POWs, he was shocked to see that all 1,000 plus prisoner had fallen out to report.  As the highest ranking enlisted man in the camp, Master Sergeant Edmonds had ordered that every man fall out to report that morning.

A Defiant Act of Heroism

Rather than give up his Jewish brothers in arms, Edmonds would tell the officer that if he killed him that he would have to kill them all and when the Allies won this war which was ever more apparent in early 1945, that he would be tried as a War Criminal. The German camp commandant, then holstered his pistol and walked away.

It is reported that up to 200 prisoners in that camp were of Jewish descent and they were all save a horrible and almost certain life-ending fate because Master Sergeant Edmonds said otherwise.

As this story has been reported and confirmed as a recent revelation of History, the Jewish living memorial to the Holocaust known as Yad Vashem would recognize Edmonds as Righteous Among the Nations which is an honor given to those who protected the Jewish people during World War 2.  The most famous recipient of this honor is Oskar Schindler known to many through the movie Schindler’s List.

Edmonds would be one of only 4 American given this high honor and the first American Soldier to be recognized for his specific and gallant actions to protect the Jewish people.

But for a warrior like Edmonds, there was no other choice than to protect his own and risk the life of over 800 men to do what history would recognize as the great moral act of that day.  While many would hope they would do the same, Edmonds died an old man in 1985 never having to wonder for himself.

What he did with a pistol to his head that day, has been one of the long lost stories of that great struggle.  But lost no more, he deserves the highest honor one could give and the respect of the historical record.