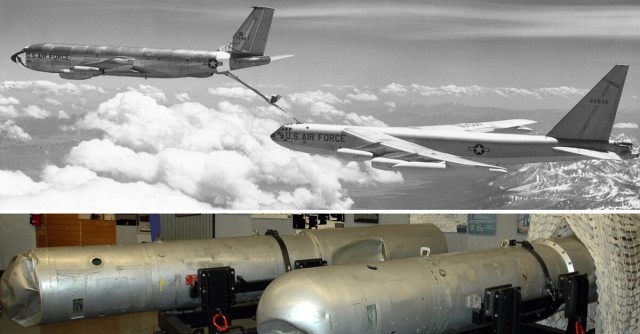 On January 17, 1966 a B52 bomber of USAF Strategic Air Command was at 31,000 feet over the Spanish coast near the village of Palomares near Almeria in Southern Spain. The aircraft, from Seymour Johnson Air Force Base in North Carolina, was on a Cold War mission which involved flying to the Coast of Russia and back. Its route took it across the Atlantic Ocean, across the Straits of Gibraltar and the Mediterranean Sea to the Russian coast, and back via the same route. The distances involved meant that mid-air refuelling operations had to be carried out over the Spanish coast on both legs of the journey.

On its return journey, the bomber made a rendezvous with a KC-135 tanker aircraft from Morón, a Spanish-American airbase situated 35 miles South of Seville.

The bomber and its payload of four hydrogen bombs fell to earth near Palomares. Three of the bombs hit the ground, the fourth fell into the sea. Of the three which hit the ground, one landed in a riverbed, and remained intact; the conventional explosive in the other two was detonated on impact, and radioactive pyrophoric plutonium was scattered over an area of approximately one square mile.

In the days following the accident there was a good deal of media publicity and demonstrations by local residents, and 600 people demonstrated outside the US embassy in Madrid. The Spanish government announced that American military aircraft carrying nuclear weapons would no longer be permitted to overfly Spanish territory. America reacted by removing soil from the 5.4 acres with the worst level of radioactive contamination and shipping it to South Carolina for burial. In the areas with lower contamination levels the soil was ploughed to mix the topsoil with deeper layers. The bomb that fell into the sea was recovered intact, the BBC News reports.

Fifty years after the accident there are still some areas of land which are contaminated, and on October 19, 2015 US Secretary of State John Kerry and the Spanish Minister of Foreign Affairs and Cooperation, José Manuel Garcia-Margallo y Marfil signed a statement of intent declaring that America will remove the soil and transport it to Nevada for disposal.