A day-to-day account of Operation Market Garden, as it happened in 1944. Written by Joris Nieuwint for Hells Highway tours.

The final assault on Arnhem begins, the Guards Armoured division attack with number 2 and 4 company of the 3/Irish Guards. They try to take the shortest road to Arnhem, the main road which leads through Elst. At 13:30hrs the attack begins and 47 tanks of the Irish Guards start their attack. Unfortunately this advance was brought to a stop just 2 miles from the starting line by anti tank guns and Strurmgeschutz of the 10th SS division. They manage to advance a bit further but come nowhere near Elst, let alone Arnhem. 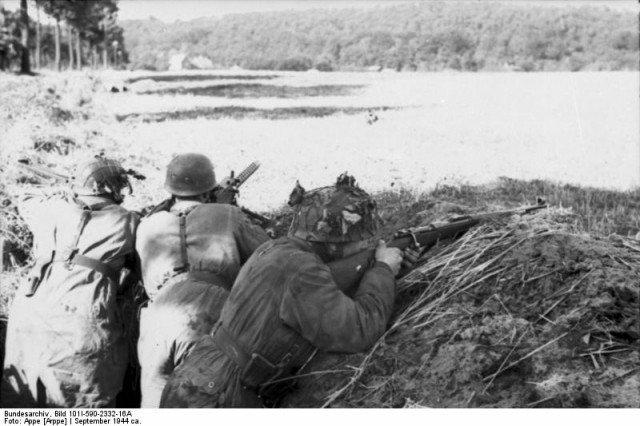 The Germans attack the bridgehead across the Waal from the direction of Oosterhout with infantry supported by (Tiger) tanks. In this attack Private John Towle earned the Medal of Honor, but was killed in the action.

Near Beek, on a hill called “Devils Hill” 2 platoons from the 508th PIR, who have been cut off since the 20th continue to hold out against heavy attacks. They were finally relieved on September 24th.

In Arnhem at the bridge the fighting seems to be winding down, the northern ramp is effectively in back in German hands, only a few ruins are still in the hands of the paras. This morning there was a short truce when the wounded were evacuated after which the fighting started again in all its brutality. 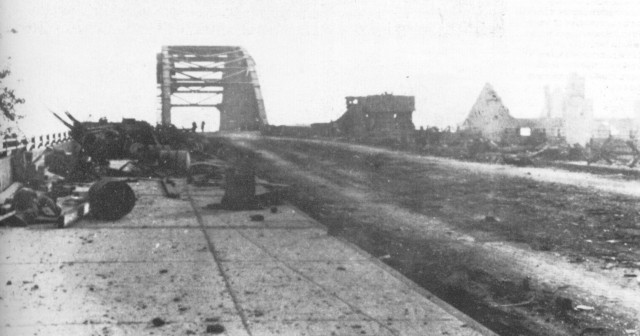 A German made picture of the northern ramp of the bridge, notice the destroyed houses on the right.

During the day the Germans mop up the last pockets of resisting Brits at the bridge after which it is immediately put to use by reinforcements sent to block the ground forces in their advance from Nijmegen. The battle for Arnhem is over. Although the fighting at the bridge was savage and lasted continuously for over 3 day and 4 nights the British casualties were relatively light, 81 soldiers out of the 750 defenders died in the fighting at the bridge.

In the afternoon a part of the Polish Parachute Brigade land near Driel on their new drop zone K, but a large number of planes turn back to England because of bad weather. The Poles land on a hostile drop zone, the Germans are shooting at them with everything they got but unlike common belief it was not a bloodbath, very few men actually died during the landing. They immediately head for the ferry which should take them across the Rhine but find it is missing. The ferry master, in fear of the Germans using it against the Brits had cut the cables allowing the ferry to drift downstream.

The 101st Airborne tries to widen the corridor by attacking the Germans near Liemdpe (1/501st) and at Schijndel (3/501st and 502nd PIR). At the same time the German 59th Volksgrenadier division attack from their position near Liempde toward Sint Oedenrode. They quickly disengage and pull back since the 101st Airborne does not have the resources to be dragged into another fight like the one at Best.

Near Nuenen, East of Eindhoven, the British and Americans try and cut off and destroy the 107th Panzer brigade and a tank battle follows. Neither side wins but the Germans lose more precious Panther thanks which they can ill afford.