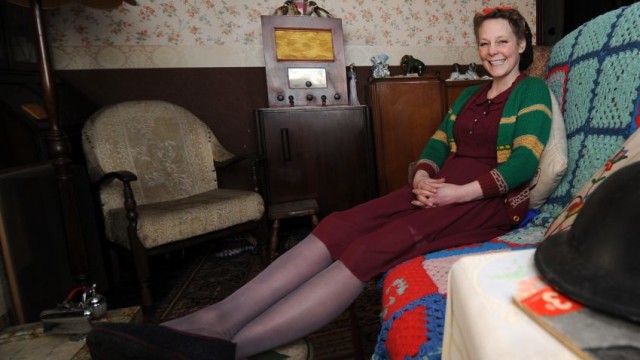 This is the daunting task facing Joanna Francis. An English wartime enthusiast, she doesn’t own a TV or computer, never drives and has not used a washing machine in 10 years. Her wardrobe and home décor are from the ’40s. Her chores are straight from the ’40s, including chopping her own wood and doing her laundry with soap flakes in a dolly tub. She admits that “people find me quite hard to live with.”

While she would love to meet someone to share her passion with, she believes she may have been “born a few decades too late.” She hopes she can find someone who would want live in the ’40s with her, including sleeping in her blackout bunker. She promises to be a good traditional housewife, putting tea on the table and doing the washing and ironing.

Joanna gets everywhere on a 1937 Raleigh bike; she never drives and does not own a car. She only uses an outside toilet and owns an authentic Land Girls uniform.

“I’ve had a few boyfriends, but I know I’m a bit of a novelty and once that novelty wears off, well, most people find me quite hard to live with.”

The problem seems to be “that most people who want that kind of housewife are either in their 90s or dead.”

Still, she is looking to find that perfect man. “[U]ntil then, I will keep looking,” she says.

When Joanna does meet people at wartime events, she finds that that for them  it is only a hobby and are happy with their modern lifestyles. Joanna is one of a kind. “There’s really only me who lives like this 24/7,” she said. “People think it’s a hardship, but it’s not – you get used to it.”

Now she lives it in her “1930s house.” “Each room I have put back as near as possible, being used as it was originally meant to be.” She traded in her central heating for coal fires and converted an out-building to an outside toilet; she ripped out her kitchen appliances because they were too modern.

But Joanna adds that her lifestyle has not affected her social life. “I still have a good social life and enjoy a beer or a glass of whiskey while listening to Al Boley, Glenn Miller, Max Miller, George Formby, etc.”

She tried using the rationing from WWII in order to make her lifestyle more realistic, but it proved too difficult.

Her one modern concession is a mobile phone.

Sometimes the modern world is difficult for her to fathom. “I worked for a while at Sainsbury’s and I remember going on my break one day when someone had left the television on in the staff room.” This was during the riots in 2011. “I couldn’t believe what I was seeing,” she said, but other people thought it was nothing unusual. “[T]hat’s something I definitely notice about other people. They have become desensitized. Outside, everything is faster and louder.”

Joanna goes so far as to pretend there are blackouts. When people see all of her lights out, they think she’s not home.

The one downside to her lifestyle is that people bring her things they think she’ll be interested in. “I’ve lost count of the number of gas masks people have brought me,” she said.