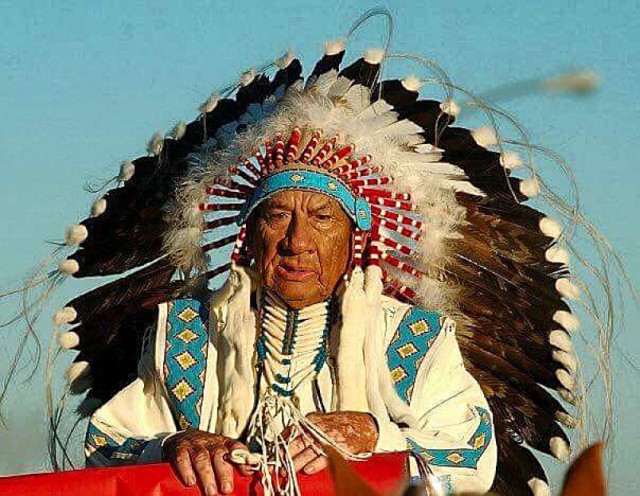 He was born on May 12, 1923, on the Fort Belknap Indian Reservation to parents Melvina and Jesse Iron Horn Sr. He enlisted in the U.S. Army at the age of 17 and was assigned to the 163rd Infantry Battalion. He received specialized training in communications and encryption and volunteered for duty as a code talker. He used his native Assiniboine tribal language to secretly transmit U.S. military communications. This meant that America’s codes were indecipherable to the enemy.

In 1943, he volunteered for “Merrill’s Marauders,” a deep penetration unit under the command of Major General Frank Merrill. During a five-month period, they worked in Burma and China, including an 800-mile trek across the Himalayas to cut Japanese communications and supply lines before an attack by combined U.S./China forces.

Horn survived the campaign along with fewer than 1,200 other men. He received the Bronze Star and Purple Heart for wounds to his chest, back, and jaw. He was recognized along with the rest of Merrill’s Marauders by a Distinguished Unit Citation for “gallantry, determination and esprit de corps in accomplishing its mission under extremely difficult and hazardous conditions.”

After being injured, Horn was discharged from the army and returned to the reservation. He took up duties on his grandparents’ farm, served on the Fort Belknap community council for 19 years, wrote the first regulations for the Fort Belknap Tribal Juvenile Court, lobbied in Washington, D.C. for a new tribal health clinic and served as chairman of the Rocky Mountain Region of the National Congress of American Indians.

He was awarded an honorary doctorate in humanitarian services from Montana State University-Northern in 2013. The next year, he was named honorary, chief of the Fort Belknap Assiniboine Tribe, the first time that title had been awarded since the 1890s. A new early learning center on the Fort Belknap reservation has been named after Horn.

Horn was also known as Shunk Ta Oba Kni (Returns with a Prisoner Horse). He is survived by 11 children, 37 grandchildren, and nearly 90 great- and great-great-grandchildren. He was interred at the family cemetery east of Fort Belknap Agency on Wednesday, March 30.