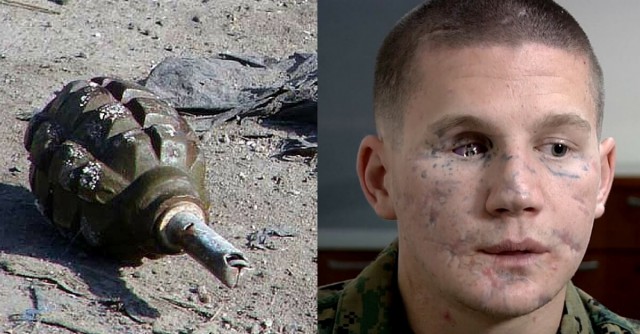 Despite what the movies might tell you, an exploding grenade doesn’t create a large fireball from which the receiving soldiers must jump into a body of water to avoid.  When a grenade goes off, there is a flash, boom, and hot metal shrapnel sent into every direction.

The effects of a grenade can be commonly survived by increasing your distance from the explosion and making yourself as a small a target as possible to the speeding shrapnel.  If, however, you were determined to maximize this weapons deadly potential on you then you would jump on top of it and wrap it in up in your body before it exploded.

At this point, the grenade is as lethal at it possibly can be.  Yet, that is exactly what Marine Kyle Carpenter did in Afghanistan and in doing so, his conspicuous gallantry honors all the men of war who jumped before him and did just that.

Jump on a Live Grenade

Get out, duck, or lay on the floor with your hands on your head because something wicked is about to come your way.  For other men, they seem to do instantly the precise opposite.

There a long line in military history of men who have made this leap and yet it is still a rare enough occurrence that it typically if not always warrant a nation’s highest military honor.  For it is an act that invites certain death despite the fact that some have been able to survive such heroism.

Jacklyn Lucas, who at 14-years-old, lied about his age to enlist the Marines during World War 2.  This young man would fling himself on not one, but two grenades and live to talk about it.  In Afghanistan, British Royal Marine Matthew Croucher jumped on a live grenade but managed to use his rucksack to absorb the explosion.  He would walk away with nothing more than a bloody nose and be awarded the George Cross for his actions.

But tragically, most Medals of Honor for jumping on a grenade are awarded posthumously.  Marine Herbert Thomas did it a Bougainville in 1943, PFC David Smith in 1950 Korea, Larry Dahl in Vietnam, Jason Dunham in Iraq, and Navy SEAL Michael Monsoor would all die in the act as they took their place in the hall of heroes.  But in 2010, it would be Kyle Carpenter’s turn and fortunately for him, he was able to receive his award in person.

Kyle Carpenter was born in 1989 and joined the United States Marine Corp at age 19 in 2009.  Joining the infantry, he would be assigned to Fox Company 2nd Battalion 9th Marines.  By 2010, Carpenter like most Marines of this era would quickly find himself in a combat deployment.

But for most Marines who knowingly join the infantry in the middle of a war, they wouldn’t have it any other way and Carpenter was no exception.  In June of 2010, Lance Corporal Carpenter deployed with 2/9 to Marjah, Helmand Province, Afghanistan which had been the scene of heavy fighting against a determined and persistent enemy.

In November of 2010, Carpenter’s Platoon had helped establish a small patrol base outside a small village in the Marjah District.  On November 21st, the enemy engaged in a bold daylight attack on their positions with hand grenades and small arms fire.

Lance Corporal Carpenter and a fellow Marine were defending a rooftop position when one of these grenades landed inside their sandbagged position.  With just seconds to decide a course of action, Carpenter flung himself on the grenade to protect his fellow Marine.

The grenade exploded, and a young Lance Corporal Carpenter’s body absorbed the blast.  Miraculously, Carpenter survived.  He would receive severe injuries to his body, right arm, and face to include the loss of his right eye.  For his actions that day, he was awarded the Medal of Honor in 2014 and became at the time the 8th living recipient to be awarded the Medal of Honor for gallantry in Iraq and Afghanistan.

What presence of mind it must have taken for a young Marine with less than two years in service to make such a decision in seconds and take his place among the hallowed halls of the men who jumped.

A Harrowing Legacy of Gallantry

Future members of the armed forces are brought up on the tales of these men as their legacy lives on.  And while many would hope that they could demonstrate such conspicuous gallantry in the heat of the moment, there don’t seem to be too many tales of multiple men jumping towards a grenade trying to get it on the action.  Rather, it is typically just the one.

That is why history will long remember these men who died and those who lived will be looked at with an insurmountable respect by their fellow warriors  For deep down inside each one, they know and wrestle with the question of whether or not they would have done so themselves.

But for men like Kyle Carpenter, all such questions have been answered.  Although he is medically retired due to his injuries, he continues to inspire the next generation of Marines with remarkable humility for a man who just jumped on a grenade and lived to talk about it.

History owes a salute to Lance Corporal Carpenter and all the men who have jumped before him.