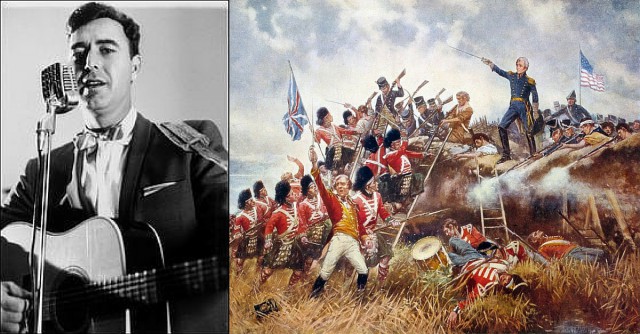 Johnny Horton, known also as “The Singing Fisherman”, led a life as adventurous and interesting as his storied songs. He grew up in Texas and California, lived in Florida, hunted gold in Alaska, went to college and dropped out on a basketball scholarship, and had his own radio show in Louisiana.

Winning a singing award made from an ashtray on a pedestal immediately impelled him to stop everything and make music a career. When he tired of something, he made grand exits, like the time he wanted to be fired from his radio show. He said (on-air) of his show’s sponsor, “What I like about Hol-Sum Bread is that it’s never touched by hand. That’s right – they mix it with their feet”.

He believed in psychic Edgar Cayce and other predictions. Hank Williams predicted Horton would marry Hank’s own wife and when Hank died, the prediction came true. His friend and colleague, Tillman Franks, had a premonition Horton would remake The Battle of New Orleans with great success. Horton himself believed in his own psychic ability and correctly predicted that he would be killed by a drunk.

He had lots of friends, drove to Memphis just to meet Elvis, sang for the last living Confederate soldier, and his close friend Johnny Cash read from the Bible at his funeral.

What is most remembered about Johnny Horton are his historical songs, especially those about war. They bring history alive with catchy tunes and fun lyrics and make us remember these long ago battles.

The Battle of New Orleans:

Horton won the 1960 Grammy for Best Country and Western recording for this song that tells the story of the battle from the view of the U.S. soldiers.

The song was originally written by Jimmie Driftwood, an Arkansas high school principle that wanted to make learning history fun for the students. He based the tune on that of the song “The 8th of January”, the date of the battle of New Orleans.

Though there are three extra verses in the original, the Johnny Horton version brought the song to the masses.

An interesting side note is that the soldiers fought to music. A bugler played from the safety of a tree’s canopy throughout the entire battle.

While this tune is full of amusing lyrics, they do ring true. The song’s protagonists don’t sound much like disciplined military men and many of them weren’t. Andrew Jackson had declared martial law in the city and took on just about anyone to enlist in the fight – including pirate Jean Lafitte and his crew. The Americans really did wait for the British to advance, but behind a 7 foot wall of mud rather than cotton bales (although artillery was surrounded by cotton bales covered in mud). The British came from down the canal through the swampy parts in the fog. They really were shot at close range between the eyes – or in one case, once over each eye.

Like the song says, the British did keep a coming despite terrible death and setbacks, and each time, the survivors ran back until the final retreat to the Gulf of Mexico.

After the success of The Battle of New Orleans, Hollywood had a job for Horton. The movie, Sink The Bismarck! was about to be released and 20th Century Fox was worried about filling seats. They commissioned Horton to write this song which played in trailers for the movie. It is not, however, in the film.

The Battle of Bull Run

During and just after the Civil War, the most popular subject of war related music was the Battle of Bull Run, also known as Manassas. It was not Horton’s most popular song, and is a bit less detailed than his other story songs of war.

However, it does portray the feeling of civilians and soldiers on both sides of the war. Concerning the Rebel Yell, this was the first time it was heard by Union soldiers, when Thomas Jackson called on his troops to “yell like furies”.  It was also at this battle that he garnered the nickname “Stonewall”.

The public, including women and children did come out to see the battle – in droves. Those wanting a better look kept making their way closer and closer to the battle and some actually became involved in the fighting.

Other writers, balladeers, and singers over the centuries have sung of war and battle, but Johnny Horton managed to make history into sing along songs that teach.