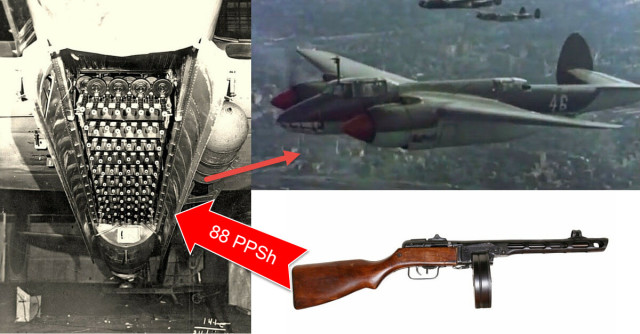 Towards the End of World War II, two Soviet mechanics sought to use automatic submachine guns to increase the capabilities of Soviet aircraft. The design, coined the “Fire Hedgehog”, was innovative, but ultimately proved to be flawed.

The Fire Hedgehog incorporated the Pistolet Pulemjot Schpagina model of 1941, commonly known as the PPSh-41. Georgii S. Shapagin, a Soviet weapons designer, created the 33-inch long, 12-pound automatic machine gun. This weapon featured a ten-inch, chrome-lined barrel fed by either a 71-round drum magazine or a 35-round box magazine housed in a wooden stock.

Soviet production of the PPSh-41 exceeded 6 million units, many of which are still in use in various theaters throughout the world. While it utilized the same round as the Soviet Torkarev pistol, a 7.62x25mm cartridge similar to the western .38 super round, the PPSh-41 had a 900-round per minute cyclic firing rate, nearly twice as rapid as its counterparts in the WWII era.

Modern commercial rounds seldom exceed 570 ft/lbs of force when fired out of a handgun, but witness more force when fired from a PPSh-41 due to the increase in barrel length. Likely, the most destructive round fired from the PPSh-41 was the P-41 shell. This loading is a steel-cored, 74-grain, incendiary round, meaning it has the proper velocity to penetrate mid-grade armor and the incendiary component necessary to ignite the contents of whatever the round is fired into.

Many PPSh-41s were fitted to the Soviet Tupolev Tu-2 aircraft. Originally designed by Andrei Tupolev when in  a Russian Gulag or prison camp, the Tu-2 was both a light bomber and high altitude fighter. From 1941 to 1948 only 2,200 of these aircraft were constructed, compared to 5,800 of its American counterpart, the B-26 Marauder. With a 61-foot wingspan, the Tu-2 was durable, reliable, and maneuverable, so much so that it remained in use until 1982 in several third world countries.

Despite its use as a bomber and fighter, it was often used to provide close air support to friendly troops, by strafing enemy ground troops. In this capacity, many Tu-2s were modified with additional armor on the underside and around the four crew members’ seats. Interestingly, many of these aircraft were piloted by members of the nine Soviet female combat squadrons in WWII. 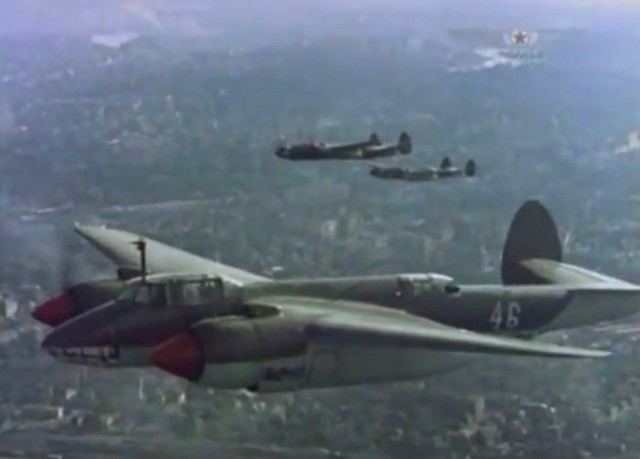 The Tu-2 was already a proven combat entity in a ground-attack role with its two forward 20mm machine guns, three rear 7.62x54mm machine guns, bomb carrying capacity, and high survival rate; the addition of PPSh-41 submachine guns to the belly of the aircraft further increased its potential for inflicting damage and casualties on enemy forces. In 1944, A.V. Nadashkevich and S. Saveliev pioneered a new design – a removable battery of originally 48, then 88, PPSh-41 submachine guns to the underside of the Tu-2.

This battery, oriented to fire down, was comprised of 11 rows of 8 PPSh-41s and occupied the space previously utilized to hold up to 3,300 lbs. of bombs. While it increased the Tu-2’s abilities in theory, only one plane, designated the Tu-2Sh, was ever fitted with the battery that could be fully equipped in a workshop, hoisted onto the plane by ropes, aimed through a specially designed sight, and fired by a solenoid which activated all 88 guns at one time.

With a 900 round per minute firing rate, round per gun capacity, and 88 PPSh-41s, the Tu-2Sh could expend 6,248 steel-cored incendiary rounds over a 1,800 long and 4-foot wide area in 4 seconds, with all weapons working perfectly. While devastating, the battery was never employed in combat due to several limiting factors.

Specifically, the battery required 100 man-hours to be fully loaded, there was a high chance of weapon malfunction, and the effective range of the PPSh-41 required Soviet pilots to fly under 800 feet, well within the range of most German anti-aircraft weaponry.  They were then very vulnerable to being shot down.

In the end, the PPSh battery was an interesting experiment, but was ultimately a failure.