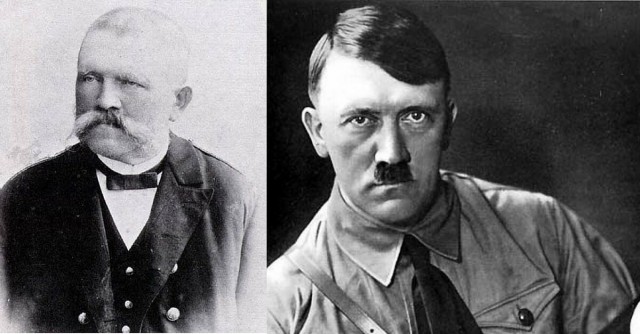 The continuation of the dictator’s bloodline in this world is in the hands of five men – sons of his nephew who have vowed never to start families of their own.

These five descendants of the World War II German Nazi leader are the two sons of Hitler’s half-sister, Angela Hitler, Peter Raubal and Heiner Hochegger; as well as the three other sons of Alois Hitler, Jr., the dictator’s half-brother – Alexander, Louis, and Brian Stuart-Houston.

Hitler may have devoted his whole life trying to perfect the human race through the elimination of the weak and the disabled and the ethnic groups he deemed inferior (the Jews). He saw the Aryans as the components of the “Master Race” and had ordered, in his years of rule, the death of countless millions of innocents to move humanity to that impeccable line he was seeking for.

But, it is because of this obsession – the hideous events and the mass killings – that prompted  Hitler’s descendants to reach the conclusion that their bloodline, that of the man who saw himself as the zenith of the “Master Race”, is very undesirable resulting to a silent agreement to intentionally kill it.

“They didn’t sign a pact, but what they did is, they talked amongst themselves, talked about the burden they’ve had in the background of their lives, and decided that none of them would marry, none of them would have children. And that’s… a pact they’ve kept to this day,” David Gardner, writer of the Last Days of Hitler, said. He had tracked down the last surviving members of Hitler’s family in the 1990s and discovered this.

Peter Raubal, who was born in 1931, is currently 82 years old. He is a retired engineer and looks like he has no plans to keep the Hitler bloodline alive. His younger cousin, Heiner Hochegger, was born in 1945, making him 68 years old today. However, like Raubal, he doesn’t have any children and would most likely remain that way until his death.

The Stuart-Houston brothers, sons of Hitler’s half-brother, have ages that range from 48 to 64 today. They may still be capable of fathering children, but the brothers show no desire in procreating their own. As children, they have made an agreement to avoid having kids of their own to deliberately wipe out their infamous lineage.

Taking a Peek at Hitler’s Heritage

When it comes to Adolf Hitler’s parentage, especially in his father’s side, there are still many sides to tackle.

For one, many historians accept Johann Georg Heidler as the dictator’s grandfather. Nevertheless, Johann’s younger brother, Johann Nepomunk Heidler, is also a contender to that position. The older Johann married Maria Ann Shickelgruber becoming the legal stepfather of her then five-year-old son, Alois, Adolf Hitler’s father.

There was no father’s name written in Alois’ birth certificate. Many speculations have surrounded that missing piece – some believed Johann Nepomunk was Alois real father but was just ashamed to admit it because he was married to another woman or that perhaps, Johann Georg was really his father and that he fathered him before he and Maria got legally married.

On the other hand, Hitler’s maternity lineage started with Johanna Heidler, the daughter of Johann Nepomunk and his wife, Eva. Johanna married Johann Baptist Pölzl and the couple, had five sons and six daughters. Klara Pölzl, one of the pair’s daughters, became the third wife of Alois and birthed Adolf Hitler.

Given the circumstances that Johann Georg Heidler was the biological father of Alois, Klara and he would have been first cousins once removed. If Johann Nepomunk were Alois’ real father, then, Alois would have been Klara’s uncle. One or the other, the two had very close relations that an appeal letter had to be written first to the church as a humanitarian waiver asking for marriage permission for the two.

This was granted. Alois and Klara became husband and wife officially on January 7, 1885. Four years later, on April 20, 1889, Adolf Hitler was born. The two had other children but only him and a sister named Paula survived to adulthood. However, the two did not have families of their own. Hitler committed suicide in 1945, and Paula passed away in 1960 without any family.

However, from his former wife, Alois had other children. One daughter was Angela Hitler, who was from his second marriage. Angela had three children, Leo Raubal, Jr., Angela “Geli” Raubal and Elfriede Raubal. The only girl among her brood, Geli, committed suicide in 1931. She purportedly had a sexual relationship with her dictator uncle and was believed to be murdered though police had ruled that out to suicide. She had no children.

Meanwhile, Leo and Elfriede both had sons – Peter and Heiner. Both these men are part of the five men who are seen as the hope of keeping Hitler’s lineage alive, but they have no intention of doing so as both, until now, do not have families and children of their own.

Another child of Alois and half-brother of Adolf Hitler, Alois, Jr., had two sons from two various women. His first wife, who was English, bore him a son William Patrick. But he left his first family in England behind, went back to Germany and married again. He and his second wife had a son, Heinrich “Heinz”. Heinrich died at the tender age of 21 as a Nazi soldier. He had no children of his own when he died.

William, on the other hand, had hoped he could gain financially when his uncle rose in power. So, he sailed from England with high hopes that his uncle would give him a profitable job. However, through all the jobs the dictator gave him – first in a car dealer shop then in a bank and finally, in an automobile factory – he had no satisfaction.

So, he started blackmailing his uncle into giving him a better job, or he would let out the family’s skeletons in the closet to the newspapers. In 1938, Hitler asked William to denounce his British citizenship so he could be given a high-ranking post. But the latter, suspecting it was a trap, fled Germany.

He then tried to blackmail his uncle again threatening him that he would expose to the public his paternal grandfather was a Jew (this allegation had been cleared by the historians as untrue). When he arrived in London, William proceeded to write an article for Look magazine that had the title, “Why I Hate My Uncle” and made a living touring and speaking about Adolf Hitler.

When World War II broke out, he and his mother had been on tour in the US. They were stranded in the country, but William made a special request to then US President Franklin D. Roosevelt, which allowed him to join the US Navy in 1944. He moved to New York and worked as a Pharmacist’s Second Mate in the Navy until he was discharged in 1947 after getting wounded.

After he had left the Navy, William changed his surname to Stuart-Houston and moved to Long Island. He eventually got married and had four sons.  His third son, Howard Ronald, was connected to the Criminal Investigation Division of the Internal Revenue Service as a special agent. However, he died in a car accident in 1989 childless.

William’s three other sons complete the ‘five hopes’ for the survival of Hitler’s bloodline. Alexander, Louis and Brian are the youngest of this brood but as of this time, they have remained childless and if their silent pact is taken into account, would remain that way until their deaths.

Is this the end of Hitler’s bloodline, then?