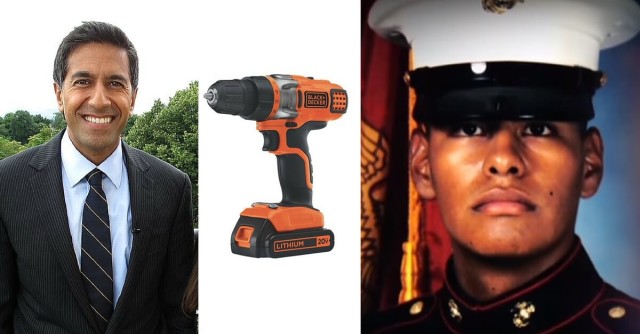 In 2003, the US invaded Iraq, allegedly because it had weapons of mass destruction. Dr. Sanjay Gupta, author, neurosurgeon, and medical correspondent for CNN, was also there to cover the event when he was asked to stop reporting the news and instead become part of it.

Gupta wasn’t covering the war itself, but the Navy medics who used the Forward Resuscitative Surgical Suite (FRSS) – an operating tent that can be broken down and set up within an hour. In it are medical equipment, sterile instruments, an operating table, an ultrasound machine, and even medical gowns – making it a fully-equipped portable hospital.

The FRSS goes wherever the front-line troops go, always staying just behind them. Staffing it are a full complement of seasoned health professionals – anesthesiologists, doctors, nurses, and lab technicians. Collectively, they’re called “Devil Docs” because they work where others don’t dare to go.

The entire set-up was the brain-child of Dr. Harold R. Bohman. A career military surgeon, Bohman was upset at how long it took the critically injured to receive medical care, especially on the battlefield. His solution was to take a risk and put the best medical equipment and personnel in harm’s way, or as close to it as possible.

Deemed by People magazine to be among the “Sexiest Men of 2003,” many have criticized Gupta of having more charm than actual experience, but they’re wrong. He was part of Interflex, an accelerated medical educational program that took in gifted high school students. After his residency in neurological surgery at the University of Michigan Health System in 2000, he took his fellowship at the Semmes-Murphy Clinic in Memphis, Tennessee.

An Emory Healthcare general neurosurgeon at the Grady Memorial Hospital in Atlanta, Georgia, he also wrote several medical journals. It was in this capacity that CNN sent him to Iraq, where he joined the Devil Docs who trailed the 1st Marine Expeditionary Force. And it was there that he met someone who forced him to put down his microphone.

Jesus David Vidaña was with the 2nd Battalion, 23rd Marine Regiment, 4th Marine Division. In 2001, he was a reservist in Fox Company, which went on to serve under the 1st Marine Division. In February 2002, he was sent to Camp Pendleton, California in response to the 9/11 attacks. In the event of another attack, Fox Company were to be the shock troops that dealt with it. Or so they thought.

What followed were ten months of grueling training, but that wasn’t what they had a problem with. It was the on-again-off-again alerts of being sent to the Middle East. In December, they were finally sent home and told to resume their lives. With immense relief, they did just that – going back to college, their old jobs, and generally picking up where they left off. It wouldn’t last.

In February 2003, they became part of Operation Iraqi Freedom. Vidaña and his comrades were in shock throughout the entire flight. It was only when they landed in Kuwait that it finally dawned on them – they’d see actual combat.

On the evening of April 7, Vidaña and his friends were camped beside the Tigris River, waiting to cross over into Baghdad. The city was in flames, providing light to the Army who were building the pontoon bridges the Marines were to cross the next morning.

On April 8, Fox Company were the first to enter Iraq’s capital. The main group stayed outside the city on a secured soccer field, while the rest split up into three platoons of 40 men each who entered the city from different directions. Their rendezvous point was the Iraqi Ministry of Intelligence, located at an intersection of five streets.

As they approached it, they were met with sniper fire and rocket-propelled grenades, forcing them to scatter. To their horror, cars were being pulled over by militia who would force their hapless drivers to zoom toward the American positions at gunpoint – the Marines had no choice but to fire into both enemy combatants and hostage civilians alike.

Vidaña served as a radio operator who kept his distance from the snipers, the RPGs, and the suicidal cars because he had to relay orders from his company commander. It made no difference. In one of the buildings behind him, someone took aim and fired.

The bullet hit its mark and smashed through the right side of Vidaña’s helmet. Kevlar stopped some of it, but the rest punched through, tearing through his skull and lodging in his brain. He didn’t even feel the slug. All he remembered was his head snapping forward then jerking back before darkness fell.

George Rosado, a Navy Corpsman (a medical specialist with the Marine Corps) got to him first. He had undergone the ten-month training program at Camp Pendleton and considered Vidaña his friend, but there was nothing he could do except pronounce the Marine dead. While waiting for a truck to haul the body off, Rosado hoped against hope and checked a second time… to his surprise, his friend was still alive.

Vidaña was finally rushed back to the waiting FRSS unit. They had stayed outside Baghdad because the situation was deemed too dangerous for them to enter. It had taken too long, however, so the Marine was pronounced dead a second time.

Closer inspection showed that he wasn’t. His heart was still beating, but it was so weak, he didn’t register a pulse. Clearly they had to work on his head, but there was a problem.  The military didn’t send over many brain surgeons. Experience told them that most injuries they’d have to deal with would be orthopedic in nature (bones, joints, tendons, muscles, and nerves).

So the doctors turned to Gupta, but there was another problem. They couldn’t open Vidaña’s head. Fortunately, the Expeditionary Force had a complete set of tools, including a Black and Decker power drill. Gupta took that, and with the help of the other doctors, got to work. An hour later, the Marine was recuperating.

Vidaña not only received a Purple Heart, he became a licensed therapist. As of 2016, he is advocating for health care reform and remains in touch with Gupta.