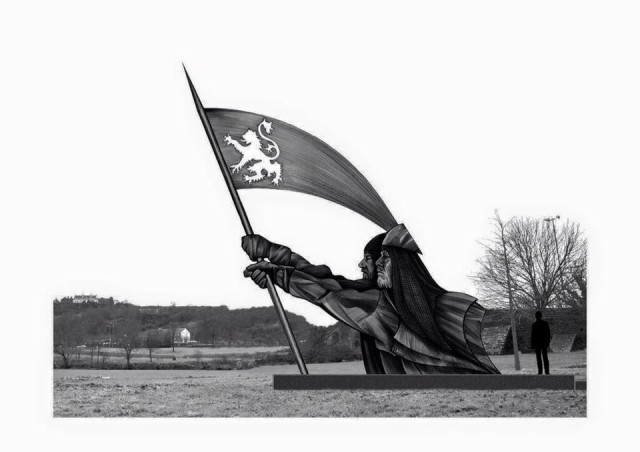 The design is by Malcolm Robertson. It shows the two Scottish commanders, William Wallace and Andrew de Moray, standing shoulder to shoulder.

Fergus Wood, Trust chairman councilor, said, “The Trust aims to create an icon at Stirling Bridge which will bring together a glorious past and an exciting future for public art in Scotland.”

He went on to say that the Trust is working in conjunction with other organizations and companies “to give this important site its rightful place.”

Future visitors will be able to come to the site and experience it and its place “at the heart of Scotland’s story.”

Robertson said that he felt that he needed to avoid conflict in his design even though it memorializes a battle.

“It’s about building bridges and the common endeavor of the two men and the way they came together in order to get a job done,” Robertson explained.

The site is midway between the Wallace Monument and Stirling Castle. 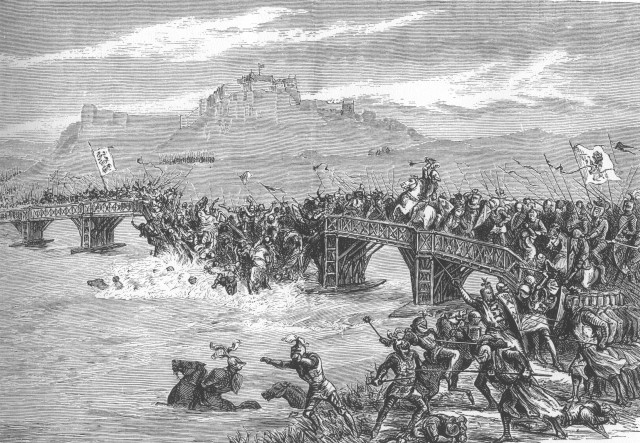 Robertson wanted to take advantage of that location and create a piece that looks to the past and to the future while sitting solidly in the present.

The Battle of Stirling Bridge occurred during the first war of Scottish independence. Wallace and de Moray were fighting separate guerrilla wars against England. Wallace focused on fighting in the south of Scotland and de Moray fought in the northern Highlands. The two joined forces on the 11th of September, 1297, on the north bank of the River Forth to defend a crossing point.

The English forces were commanded by the Earl of Surrey and Hugh de Cessingham.

The Scots waited until part of the English forces had crossed the bridge and then attacked while the river separated the English.

Wallace and De Moray inflicted a heavy defeat on the English as they attempted to seize the strategic bridge. The Scottish pikemen formed a tight and impenetrable defensive wall, that braved the assaults of the English knights.

Some reports suggest that the bridge collapsed under the weight of the heavily armo
red English knights. Many of the knights fell into the water and drowned. As a result of the battle, the English were forced to retreat from most of Scotland and William Wallace was even able to raid deep into England.

In the absence of a legitimate Scottish king, Wallace and de Moray were appointed Guardians of Scotland.