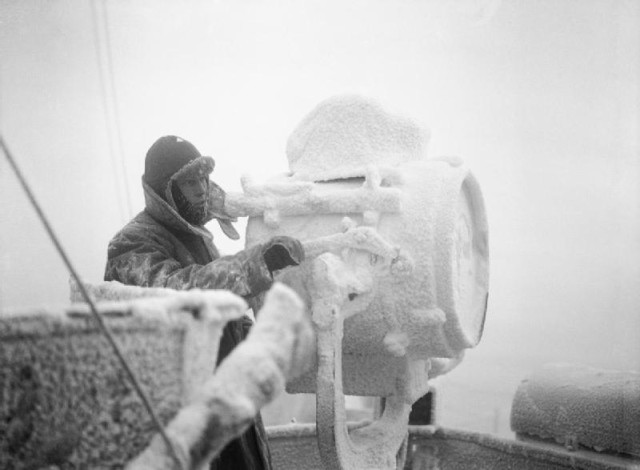 A group of WWII veterans has been awarded the Russian Ushakov medal at an event in Doncaster, Lincolnshire County. The veterans, who are all now in their nineties, were awarded the Russian medal for their service on the hazardous Arctic convoys during World War II.

They were then invited to a lunch held in the mayor’s parlour at Grimsby Town Hall, where they had tea and cakes with the mayor of North East Lincolnshire, Councillor Cliff Barber, and told him stories about their experiences on the dangerous voyages they took part in, during the war.

Between 1941 and 1945 the veterans endured freezing weather conditions and the continual threat of bombardment from German torpedoes on board the Arctic convoys, which were responsible for delivering supplies to Soviet forces. The convoy’s journeys were considered so treacherous that Winston Churchill referred to each of the missions as “the worst journey in the world”.Many thousands of sailors died during these hazardous journeys.

One of the veterans, 95-year-old Sidney Lewis, took part in 13 of the convoys and said they were not adventures that he would want to repeat. “We never stopped”, he said. “Day after day there were bombardments and torpedoes. The Destroyers were workhorses. They never stopped at all. I wouldn’t want to go through that again. That’s why you feel proud to still be here getting this award.”

Another veteran, 91-year-old Harold Christoper Bunce, who was a steward aboard the aircraft carrier H.M.S. Indefatigable, can’t believe that Russia has chosen to award the men for their efforts. “The Russians have been ever so nice. All the time they’re sending me stuff saying thank you ever so much for helping us. When I got this medal from them, I couldn’t believe it. It’s really nice.”

Four representatives from the Russian Federation travelled from London to meet the veterans at the Doncaster event and award them with their medals.

Councillor Barber, who also attended the event as a representative of the borough, is pleased that Russia has chosen to honour the veterans in this way:

“It’s nice to see after what they’ve done during the war that they’re getting what they deserve. It was very generous.”

The Russian are grateful to the veterans because without their bravery, much needed supplies would not have reached their country during the war with the Nazis. The Arctic Convoys helped the Soviets to overcome the Nazi invaders and eventually to defeat them.

Image By Coote, R G G (Lt), Royal Navy official photographer – This is photograph A 6872 from the collections of the Imperial War Museums (collection no. 4700-01), Public Domain, https://commons.wikimedia.org/w/index.php?curid=2832031