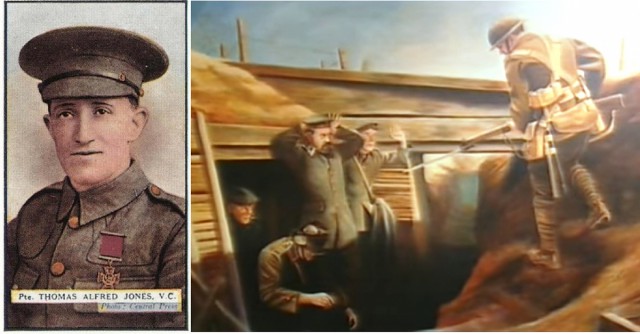 Thomas Alfred Jones was nicknamed “Dodger” in childhood because he was good at soccer. Unfortunately, they quickly changed that to “Todger” – which is British slang for “penis.” Worse, he never managed to shake that nickname off.

It’s probably why he went on a rampage in WWI – single-handedly attacking a German trench and taking over a hundred POWs. So in the end, Jones got the last laugh because that action earned him a Victoria Cross.

Jones was a private in the British Army, part of the 1st Battalion of the Cheshire Regiment. During the Battle of the Somme, his group was charged with retaking the villages of Morval, Gueudecourt, and Lesbœufs from the German 1st Army.

Jones and his men had secured Morval on 25 September 1916 and were on the outskirts digging trenches to prepare for their defense. As they did so, sniper fire hit one of his friends in the head, though not fatally.

More bullets whizzed past Jones, so he asked permission to fire back. But an officer said that the trench had to be prioritized, so Jones had to keep digging.

More sniper fire came at them – hitting someone else in the head and another in the thigh. Looking in the direction the shots were coming from, Jones saw a white flag being waved.

That was the last straw.

He yelled at the officer, this time demanding permission to shoot back.

But he got the same reply: “keep digging.”

Yet the white flag kept waving while the sniper kept shooting.

So Jones grabbed his rifle, threw down his shovel, and vaulted out of his trench. Several hundred yards away, the Germans were delighted at the easy target he made as he sloshed through the thick mud toward them.

One bullet punched a hole through his helmet, clanged toward the back, then burned its way down his back. Four more tore holes through his jacket, but Jones only had eyes on the sniper in a tree. Pausing only long enough to aim, he took the man out, then ran on.

Looking over the mound of the German trench, he saw three men. To avoid getting hit by them all, he ran toward where the trench ended, jumped in, and shot the first. The body fell, presenting the second target who met the same fate.

Jones fired at the third man, but nothing happened. He was out of ammo.

He struggled to replace the cartridge as number three ran toward the entrance of a dugout and returned fire. Fortunately, the German missed, Jones didn’t – and another man bit the dust.

Jones ran deeper into the trench till he was forced to turn into a traverse. Running into it, he met five more soldiers all of whom he dispatched. Ahead were more, but Jones was still angry about that white flag. Nor did he want to get back to digging duty.

When King George V later invested Jones with the VC, he asked the private why he did what he did.

Jones replied, “If I’ve got to be killed, I’ll die fighting not digging.”

Yelling hysterically and firing from the hip, he surged ahead, causing panic. German soldiers began bolting into their dugouts, hoping to find some protection behind crude doors of wood and cloth. Not all made it in time, however, as Jones continued shooting at anything that moved.

Within minutes, the trench was silent as survivors huddled quietly, hoping the mad Englishman would go away.

But Jones had come upon a pile of bombs. Grabbing a few, he chucked them into the dugout closest to him and ran. German soldiers came out immediately… in bloody, mangled pieces.

Ahead, three soldiers boiled out of their dugout with their hands in the air screaming, “Mercy, Kamarad!”

Each had left their weapons inside to show they had no desire to resist.

Jones finally realized the mess he had gotten himself into. He still couldn’t understand why none had tried to shoot back, but decided to see how far he could go.

Fighting to keep a stern face, he asked if any of them spoke English. One said he could, so Jones gave the man a choice – be a POW or be shot. Surprisingly, the three chose the former option.

Jones herded them into a hollow, then ordered the English-speaker to go into the next dugout to give them the same choice.

“Well!?” he demanded after a brief exchange.

“I don’t know,” the German replied, shaking his head.

Miraculously, those inside had a change of heart.

Jones ordered them to come out one-by-one and without any equipment. Fifteen did so and were sent to the hollow. To make sure the dugout was indeed empty, he chucked a bomb in. This was repeated with the remaining eight or nine other dugouts.

Once all the men were back out in the trench, Jones allowed them to retrieve their coats, but only in groups of two. Only when they had come out could the next pair go in.

It was during one of these coat-retrievals that one ran. Jones shot him, then turned to the rest, asking if anyone else wanted a bullet-sandwich.

They were all sitting on the trench floor, but seeing their comrade shot, they all jumped up and waved their hands in the air, screaming, “Kamarad!”

That’s when Jones finally lost it and began laughing his head off.

Finally catching his breath, he began wondering what to do next – but he needn’t have worried. After other British soldiers saw the German being shot from a German trench, they sent a man over to investigate. That’s when more came over to relieve him.

Returning to the British line required running through a gauntlet of German fire, however, so not all made it. Officially, Jones captured 102 POWs, but he insisted that he initially took as many as 150.

On 3 August 2014, the town of Runcorn, Cheshire (where he was born) unveiled a statue commemorating his feat. With great amusement, they officially named it the Statue of Todger Jones.

Images used:
“Todger 5a” by Peter I. Vardy – Own work. Licensed under CC BY-SA 4.0 via Commons