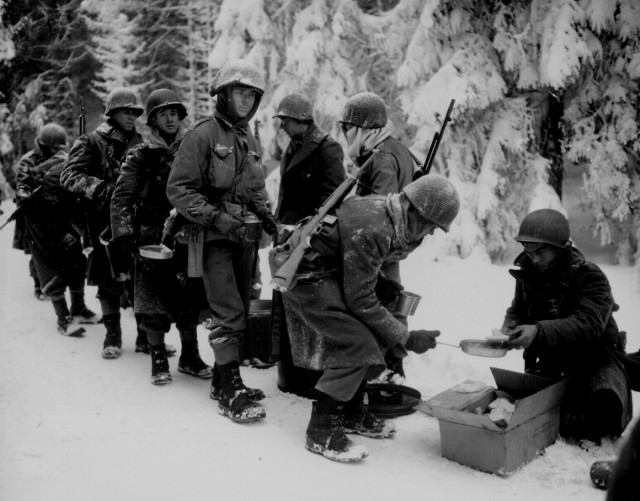 “Christmas never comes around that I don’t think of the Battle of the Bulge.”

Sergeant Malcolm “Buck” Marsh Jr. spent Christmas this year surrounded by his family – three children, seven grandchildren, and five great-grandchildren – as they cuddled together around a carefully decorated Christmas tree.

However, no Christmas ever passes without reminding the WWII veteran about the Christmas he spent in knee-deep Belgian snow readying for battle along with his comrades from the Company A of the 36th Armored Infantry Regiment during the Battle of the Bulge.

Christmas Eve of 1944 saw marsh aboard a French “40 and eight” boxcar, which got its name in WWI for being the transportation mode used by 40 men or eight horses; the next day he was in the area near Havelange, a quaint Belgian village.

“Some of the guys were able to have Christmas dinners, and we had the supplies, but we couldn’t to them. We were in what we called ‘Buzzbomb Alley.’ … They didn’t have a kitchen set up, so they gave us C-rations,” he recounted.

The men proceeded to light fires in 55-gallon drums to heat up their Christmas dinners that consisted of ham sprinkled with bouillion powder and egg; the band’s chaplain had already blessed their rations during the midday Christmas service.

The 21-year-old soldier who was 5,000 miles from the warmth of his home decorated for Christmas along with his fellow servicemen.

“We took (the ration cans) and hung them on the evergreen trees. Some of the guys had gotten some cardboard and cut out some stars and things. It got dark at about four in the afternoon. Some of us that could sing were singing Christmas carols,” he added.

The next day, however, was another matter when they were sent on their way to join Company A of the 36th Armored Infantry Regiment and on December 29, 1944, he officially entered the “bloodiest U.S. battle of World War II”.

Marsh pointed out that the Battle of the Bulge was the biggest land battle American troops ever fought in – it lasted from December 16, 1944, to January 25, 1945 – and he then added that the casualties resulting from it was heavy.

The company was divided into pairs and Bob Janicki became his foxhole partner. They, like every other pair, shared a foxhole that was six-foot long, four-foot wide and twelve inches deep.

He further recounted that when he joined, it had just begun to snow. Temperature readings floated over between zero and five degrees, and their predicament was made worse by their foxhole lifestyle.

So, to stave off the brutal cold, both he and Janicki layered their foxhole alternately with raincoats and blankets, if there were any, topped with overcoats before lying in.

“Bob had suffered a terrible facial wound earlier in the war. One side of his face was burned. I always said Bob wasn’t pretty, but he sure was warm,” Marsh mused about his foxhole buddy.

Even at 90, the WWII veteran’s memories about the war remains sharp, and one of the things he never forgot about it was the cold.

“In the Bulge, water froze in our canteens. I think the weather was equally as bad as being shot at.”

He even experienced being in the “snow patrol” and American soldiers, being without snow camouflage gear like the Germans, had to do with whatever that were on hand – white bed sheets. They sewed hoods and arm pieces on these to hide their green uniforms in the snow.

“I looked like a bride with a four-foot train coming down the aisle,” he laughingly added about his original snow gear then.

Marsh was also assigned a reconnaissance mission along with three other soldiers which meant they had to sneak behind the German lines by way of a sunken road. As they trudged through the snow that was about thigh-deep, they heard icicles falling over their heads and ducked for cover.

“The four of us just melted into the snow with our funny snow capes on. The Germans were about six feet from us,” Marsh recalled about their escape.

When January 20 dawned, Marsh’s division was able to meet up with the 2nd Armed Division at Houffalize, a Belgian municipality, and sealed off the said war. Five days later, it was officially over.

But the war did not end for Marsh after the Bulge. Marsh, together with his company, had to cross The Rhine, aid in the capture of Cologne as well as free a prison camp in Nordhausen, Germany.

For his heroic efforts during the war, Marsh was given the Purple Heart along with other military decorations and medals. He stayed in Europe as part of the army of occupation and returned home February 1945.

Marsh was named honorary command sergeant major of the 36th Army Infantry Regiment in 1999. He, together with his wife Wanda, traveled all the way to Germany to receive the award and visit some of the battle sites he fought in Belgium.

After leaving the Army, Marsh had been very vocal about his years as a soldier especially about his time spent in the war. He was one of the veterans featured in the documentary Alabama Remembers WWII put up by the Alabama Public Television. In 2011, he wrote his memoir Reflections of a World War II Infantryman.

But behind his stories of victory, camaraderie, and bravery, he also experienced agonizing loss.

He then recounted how a sniper killed a squad member on each of his side at Dom Theatre in Cologne – Robert Morries and Richard Baughn.

Marsh said that talking about his war experience to his Auburn University Phi Delta Theta brothers as well as to his biological ones helped him cope up with the harrowing experiences he had during the war.

“I was very fortunate to get through all of this. I think talking about the war with my brothers and (friend) Gene Sledge so much, it kept me from internalizing,” he added.

“I really don’t think it’s healthy to keep it all inside of you. It did me good to talk about it.”

Every year spent with his family wrapping gifts with his wife and waiting for everyone to come for the holidays; Marsh always remembers how Christmas Day was in Belgium some seven decades ago.