You may already be familiar with the Pacific War – but The Pacific, a 2010 miniseries produced by HBO, is a media event that can shine a new light on the war and its major moments. First released in March of 2010, The Pacific came to light after the resounding success of Band of Brothers, a miniseries that featured soldiers’ stories within the European theater of World War II.

Similar to its predecessor, The Pacific focuses on the horrors of war and a few of the men who faced them, but introduced a new theater and new stories. This miniseries, however, is more than just a presentation of names, dates, and battles; it’s an intriguing and intricate series, one that set records, surprised veterans, and added a bit of fiction. Here are some surprising facts about The Pacific that can shed new light on the well-received miniseries.

1. The Pacific is based on the stories shared in the real memoirs of U.S. Marines Eugene Sledge and Robert Leckie, both of whom are characters in miniseries. 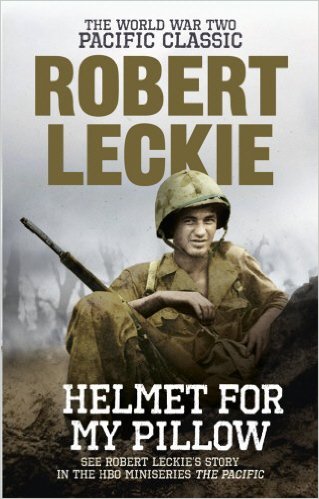 Though a miniseries of its own, The Pacific was created as a companion to another popular wartime miniseries by HBO: Band of Brothers, which premiered in 2001 and focused on World War II. The Pacific presents the stories of three U.S. Marine Corps members – Eugene Sledge, Robert Leckie, and John Basilone – and their experiences in the Pacific Theater of Operations during the Pacific War.

Though these three men were each in a different regiment of the 1st Marine Division, their stories are drawn together thanks to their memoirs. The events of the miniseries come from With the Old Breed: At Peleliu and Okinawa by Eugene Sledge and Helmet for My Pillow by Robert Leckie. Each memoir and the miniseries touches on the battles the 1st Marine Division and its men encountered, from Guadalcanal and Peleliu to the Battles of Iwo Jima and Okinawa. 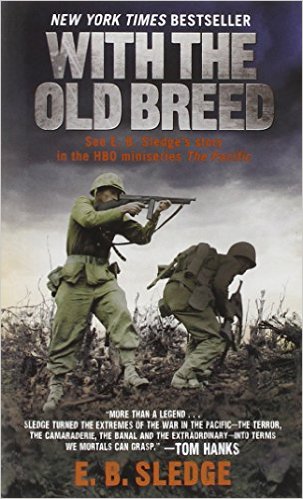 2. Although the miniseries itself was based on memoirs, HBO commissioned a book based on the series after it’s successful premiere.

There seemed to be no need for a companion novel for The Pacific. After all, the miniseries took its material from the books mentioned above – but ironically, when the show proved successful, HBO commissioned an entirely new book. However, to make the new tie-in book for the miniseries different and exciting for readers, HBO chose to incorporate a few new characters.

The book does cover the stories of John Basilone and Eugene Sledge but introduces Austin Shofner and Vernon Micheel. Written by Hugh Ambrose, a historian and the son of the author of the Band of Brothers tie-in book, the new characters help broaden the focus of the book’s stories to include more events during the Pacific War, including the fall of the Philippines, Midway, and Luzon.

3. Though the original battles featured in the miniseries weren’t fought in Australia, the country served as the filming location for all of the show’s scenes. 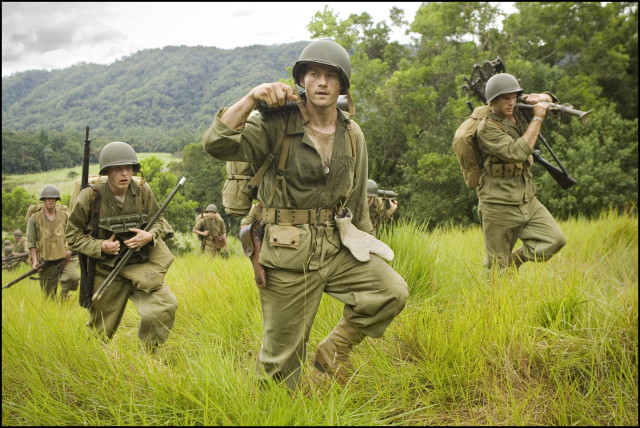 The Pacific may feature historical events that played out in the actual Pacific, but the miniseries wasn’t filmed in any of the original sites. Instead, the entire show was filmed in various locations throughout Australia. This was due to two companies associated with the series’ production, Seven Network, and Sky Movies. Both Seven Network and Sky Movies joined The Pacific in order to secure the necessary rights to air the finished show in Australia and the United Kingdom. So, the show’s production set up its headquarters in Melbourne and began casting and preparing for filming.

From August 2007 to May 2008, the cast and crew shot scenes at a wide variety of locations throughout Australia. National parks, downtown Melbourne, the beaches of Queensland, the suburbs, high schools and colleges, plantations, sand quarries, and even rural sites in Victoria were all used. Only one studio was used during the filming process, Central City Studios at Melbourne Docklands; all other shots were done on location.

4. The Pacific blew its budget; Originally, $100 million was the production budget, but the miniseries ended up costing a total of $200 million.

Before production and filming began, producers estimated that The Pacific would cost about $100 million. However, it quickly exceeded that estimate and reached more than $200 million spent – and the miniseries earned itself the title of most expensive television miniseries ever created.

5. John Basilone really did participate in bond tours back in America – and he did reenlist in order to join his former friends at Iwo Jima. 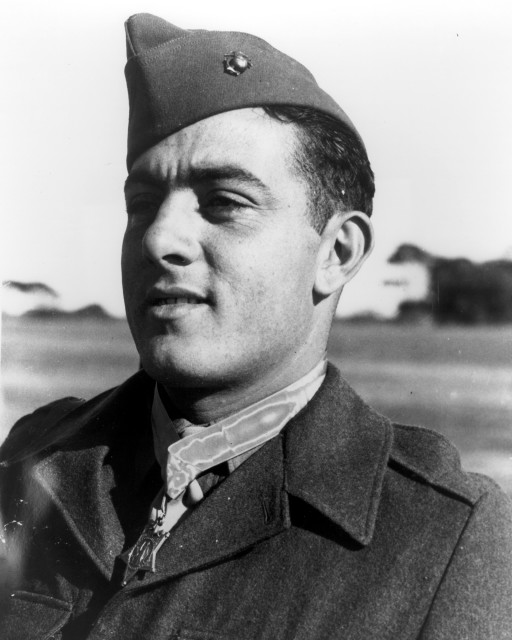 Although The Pacific blends the real stories of those who fought as Marines with fiction created by show runners, there was truth at the heart of the characters’ stories. One, in particular, John Basilone, had a story that seemed almost entirely fiction.

According to the miniseries, Basilone received a Medal of Honor for his heroism during the landing at Guadalcanal, then spent months celebrating his new status as a military hero traveling throughout the U.S. on a star-studded war-bond tour – only to reenlist so he could join the men of his company at Iwo Jima. There’s no fiction in Basilone’s story; every one of these moments featured in the TV series is true.

Basilone did earn the Medal of Honor and returned to America in 1943, embarking on war bond tours that were publicized nationwide and celebrated with parades and audiences of thousands. He was recognized as a hero by celebrities, politicians, and national news outlets, and Basilone used his new-found fame to raise money for the war effort.

Unsurprisingly, this fame became too uncomfortable for the veteran, and he wanted to step out of the limelight – Basilone felt more at home on the battlefield. He asked the Marine Corps to return to war but was denied and offered an instructor position in the U.S. instead. Basilone refused, and made a second request; the Marine Corps approved this time, and Basilone reenlisted just in time to fight with his original company at Iwo Jima.

6. It was so realistic that some veterans who fought in the depicted battles fell into flashbacks. 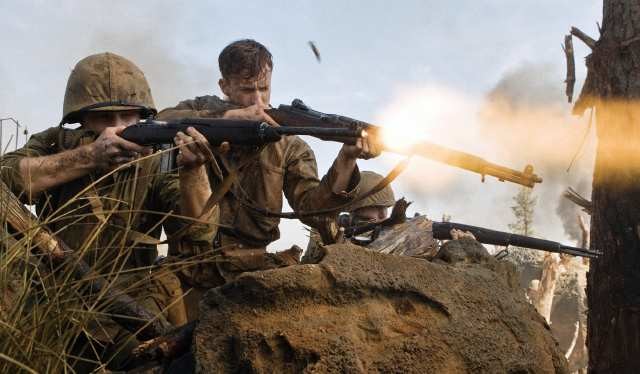 Television shows tend to glamorize everything; such wasn’t the case with The Pacific. Veterans of the Pacific War found the miniseries to be so accurate, so realistic in its depiction of the battles that they felt as though they were back in those very moments. According to an opinion piece written by veteran Bill Gallo for NY Daily News, The Pacific and its visually stunning scenes were enough to bring on flashbacks.

Gallo stated that “it was real, so goddamned real that my head darted back to when I was wearing green combat fatigues and carrying my M-1 Garand rifle fighting in the Pacific.” Watching each episode of the series brought Gallo back to every battle he faced in the Pacific War, giving him flashbacks. For him, it brought back the intensity of the situations and “the elements of war” as the show addressed his real-life experiences.

7. Executive producers Steven Spielberg and Tom Hanks decided to create this miniseries, not because of the success of Band of Brothers; vets from the wars in the Pacific actually pleaded with the two to share their stories, their experiences.

Although Band of Brothers saw immense success after its premiere, that initial miniseries wasn’t what prompted Spielberg and Hanks to create a follow-up to capitalize on veterans’ stories. In fact, the inspiration for The Pacific sprung from veterans themselves; those who fought in the Pacific War reached out to the two executive producers and asked for their stories to be told.

Many of these veterans felt that Americans were very familiar with World War II, but were unaware of what took place in the Pacific. The story of the Pacific War was so drastically different from World War II in Europe, and a “particular kind of hell” according to those who fought its battles; they wanted to share their experiences before losing them entirely.

While The Pacific may appear as another war miniseries, another attempt to explain and summarize the events of an international conflict, it’s a show that does so much more. From introducing new audiences and new generations to the Pacific War to relaying the experiences of the Marine Corps and its men in brilliant, realistic detail, the miniseries presents an eye-opening view of what happened on the ground during the war.

Whether you’re watching The Pacific for the very first time, or it’s become your favorite since its premiere, there’s a lot to learn in each episode of this interesting and engaging show.