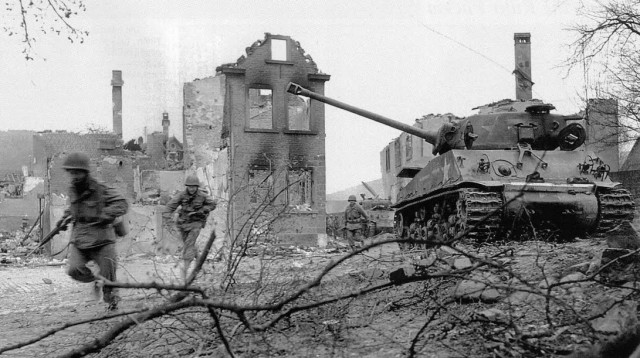 Only starlight and a sliver of a moon lit the way for the fragmented platoon of the 14th Armored Division “Liberators” Infantry. It was another village in France, another row of buildings to clear of Germans. The five men searched each structure on their assigned side of the dirt street finding no one, not even a cat hiding or lying in wait. After passing by what appeared to be a horse drawn plow parked near a wooden structure, machine gun fire burst from the opposite end of the street. Ducking and running, the soldiers opened the first available door and hurried inside the building. Bullets ricocheted off the plow as they slammed the large door shut.

Jerry Fields tripped over a timber and realized it was meant to secure the door. Snapping at his companions, he demanded a match be lit. The dim light revealed the large piece of wood. Jerry hurriedly lifted it, and slammed it into place to secure the large, double doors. As the match burned, one of the other men noticed a wagon parked in a stall and a second set of doors at the opposite end of the building.

A carriage house it was, now being used as a barn if the flat wagon and other farming tools scattered about were correct clues. At his urging, three of the men moved around the wagon to push it in front of the door. It wouldn’t roll. Another match was lit, exposing a rock used as a chuck to prevent the wheel from rolling. Kicking it out of the way, the men suddenly froze.

The sounds of gunfire and bullets striking surfaces outside had stopped. A rattling, squeaking sound filled the men’s ears. A loud explosion pierced the night. More rattling confirmed the men’s fear. A tank. Maybe a Panther. No door or wagon would stop a machine like that, or its ordinance. All but one of the men retreated to the far side of the barn and huddled in one of the horse stalls. They heard sounds outside both ends of the building and felt completely trapped.

The lone man struck a match and lit a cigarette. The glow lighting his face forever stayed in Jerry’s memory, as the very next moment another volley from the tank cannon exploded in the street. Immediately following another blast caused the men to cringe. A crashing sound was followed by a scream of pain and shock no one had ever heard before. Hands shaking, two men lit matches and looked for their buddy who was still screaming.

A piece of metal, possibly a part of the plow outside the carriage house was embedded in one of the large wooden poles holding up the roof. Holding the matches and moving forward, light flickered and shook in time with the fingers gripping the small sticks of fire. The light fell on their buddy who was on the ground no longer screaming, but his hands reached upward, toward his friends. To their horror, the men saw what had happened. The disc they saw in the pole had ripped through the wall and their buddy’s legs. Blood spurted in all directions. Both of the man’s legs had been severed above the knee.

Jerry fell to the ground and desperately tried to put his friend’s mangled limbs back in place. Blood continued to gush from the horrific wound. Frantic, Jerry appealed to his buddies for help, but they seemed shocked and frozen in place. The effort made to staunch the flow of blood failed, the spurts diminished until they stopped completely. The men did not hear anything except their buddy’s final breath. One of the infantrymen said a short prayer. All of them bade goodbye to their friend. Wide eyed with panic and fear, the remaining four all hurried to the back door of the barn. Readying their weapons, they listened carefully, expecting to hear German whispering and to face their own deaths.

From outside came a voice—a curse word in plain English with a Texas accent. A wave of relief rushed through the men. As one attempted to open the door, Jerry stopped him, saying the people outside didn’t know who was inside. The men paused, not wanting to reveal their position to the Germans, but desperately wanting to reunite with their own troops. Jerry made a quick decision, cracked the door open a slight bit, and hoarsely called out, “Remember the Alamo!” From outside, the immediate reply was a whispered, “The British are Coming!” 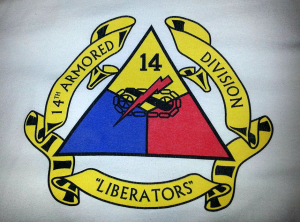 The men burst out of the door into the arms of their brothers of the 14th Armored. With a brief look back toward their fallen buddy, Jerry considered tossing a match into the haystack near the door and burning the entire barn down to the ground. Instead he found a stone and made a mark in the wood on the back of the door. Later, when they had control of the town, he would return and try to recover the dead man’s body. For that night, however, the living disappeared into the darkness and hoped their own tanks would take out the Panzer that killed their friend.