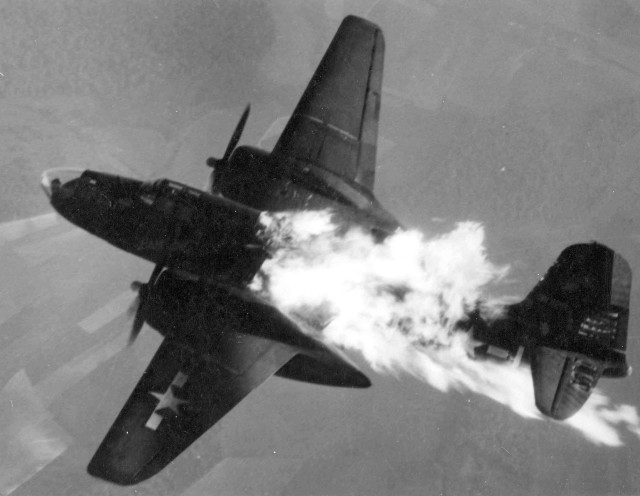 Douglas A-20J-10-DO (S/N 43-10129) of the 409th or 416th Bomb Group after being hit by flak over Germany. It burst into flames and crashed a mile west of the target. Two chutes were seen to come out of the plane. Its crew was 1st Lt Robert E. Stockwell, pilot, 2d Lt Albert Jedinak, bombardier-navigator, S/Sgt Hollis A. Foster and S/Sgt Egon W. Rust, gunners. Lt Stockwell had been with the Group almost from the beginning of its existence.

The strategic bombing campaign during WWII cost the lives of roughly 160,000 Allied airmen and 33,700 planes in the European theater alone.

When looking at the RAF, of 7,374 Lancasters built during WWII, 3,349 would be lost in action and the crew had only a one-in-five chance of escaping. For the B-17 crews that number was slightly better, the B-17 had more emergency exits and they had a 3 in 5 chance to make it out.

Not even one in four US airmen completed the 25 missions over Germany needed to be sent home. That number was eventually raised twice, first to 30 and then to 35 missions.

Regardless of how you feel about the methods used and the goals set, the bravery of the pilots is amazing, getting into their airplanes for a mission knowing the odds.

Wherever possible we have added information to the images about the crews fate. Please note that the reason there are so few RAF pictures in the series is that they flew night missions. 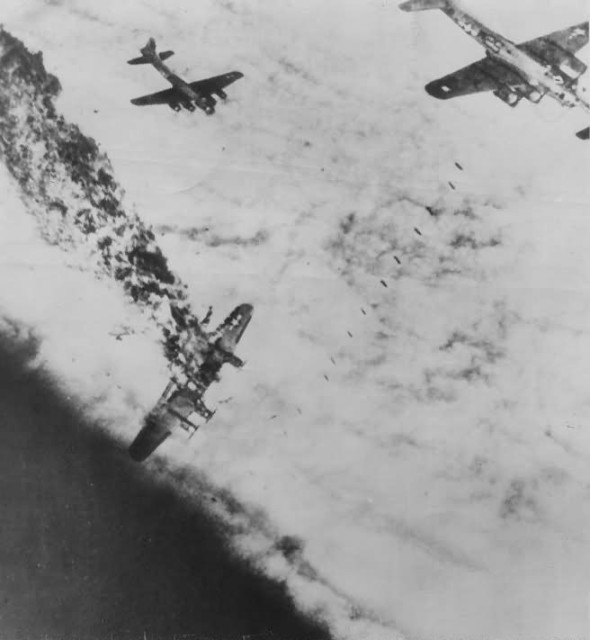 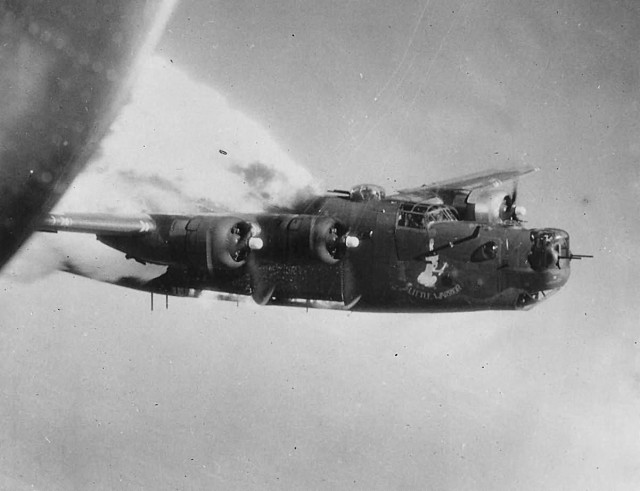 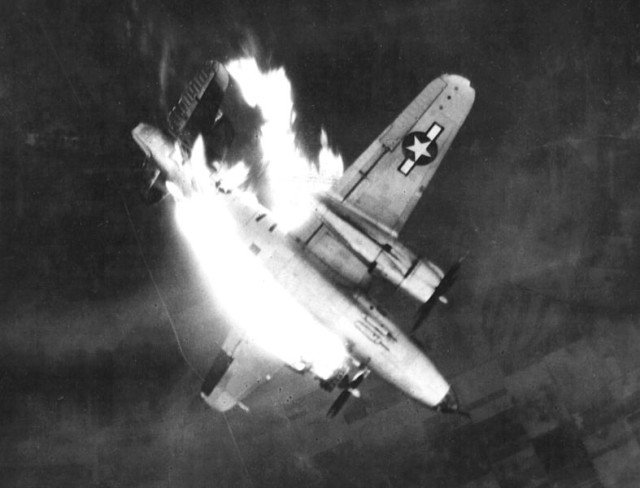 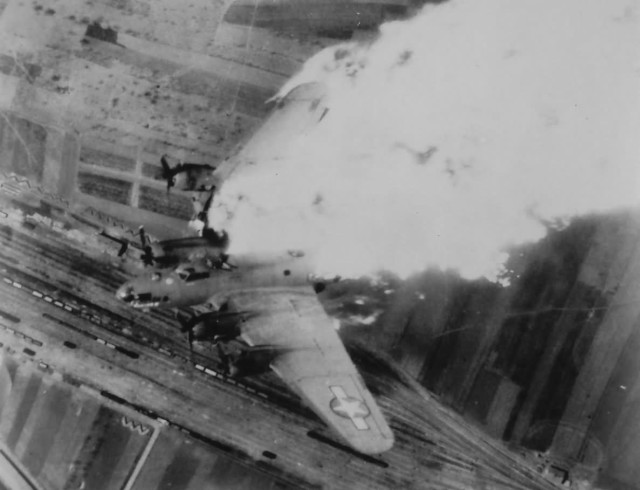 B-17 Flying Fortress Bomber in Flames 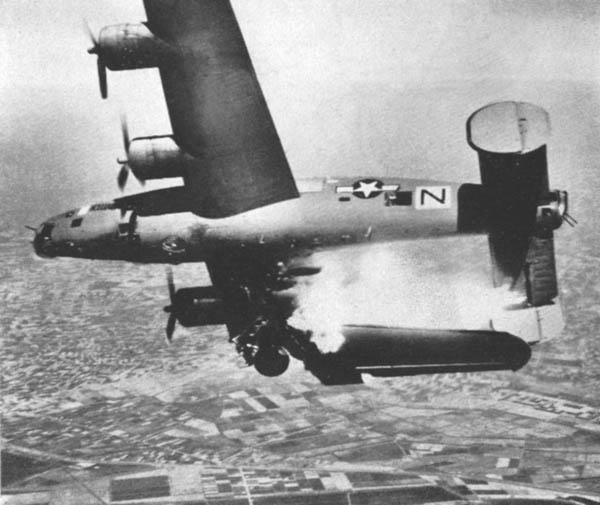 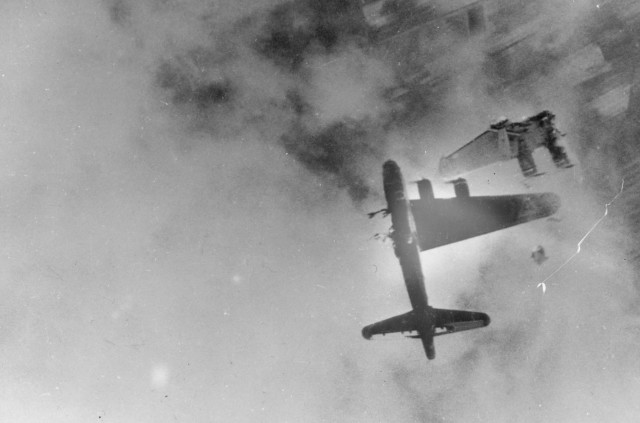 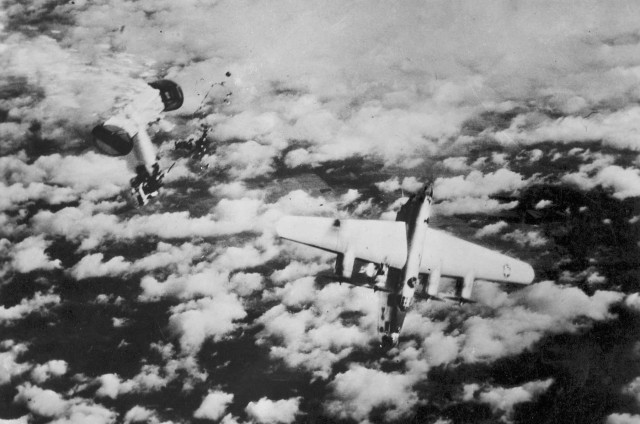 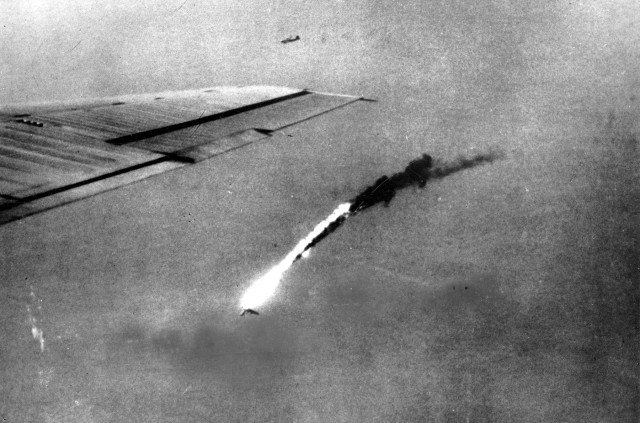 With one wing gone, a B-29 falls in flames after a direct hit by enemy flak over Japan. 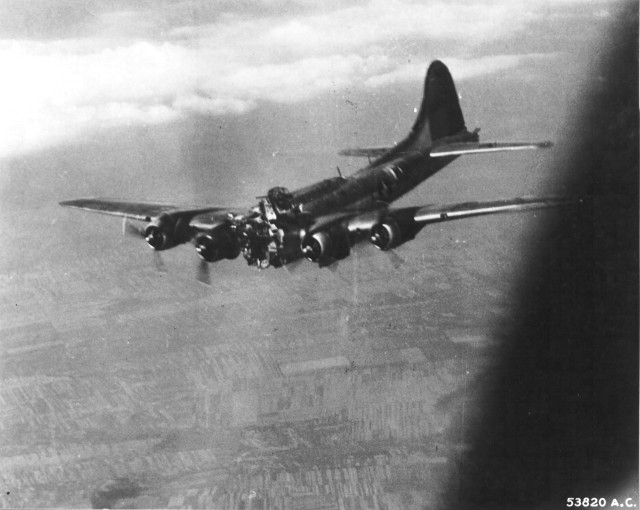 B-17G Fortress “Mizpah” took a direct AAA hit in the nose on mission to Budapest, 14 Jul 1944. 2 were killed instantly but the pilot held her level long enough for crew to get out & become POW’s. The aircraft crashed near Dunavecse, Hungary 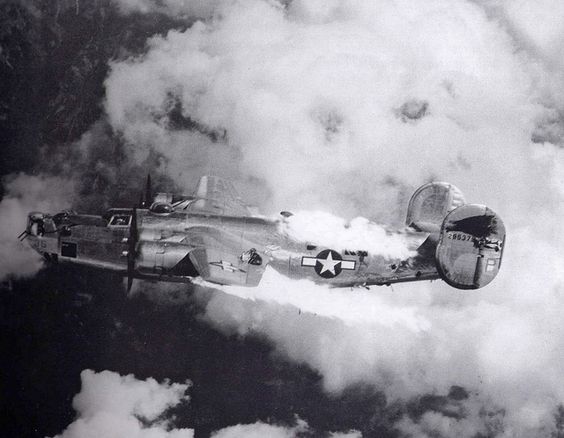 B-24 Liberator in flames not far from Vienna. The crew did not survive. 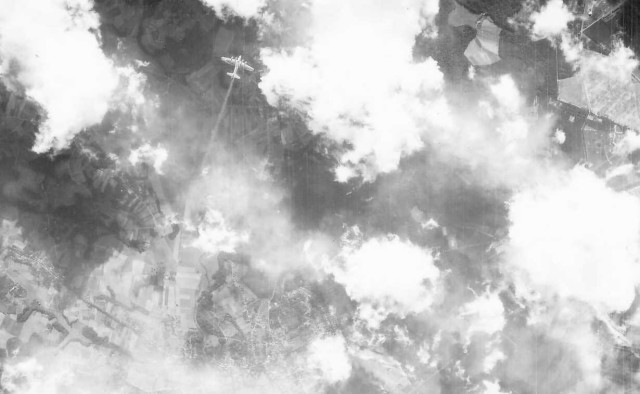 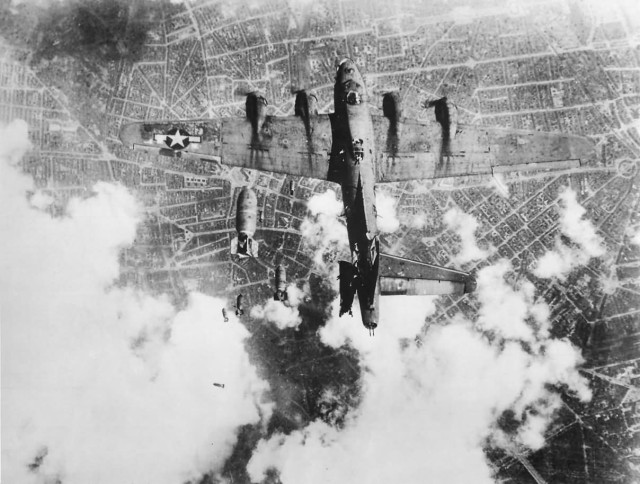 B-17G Fortress ‘Miss Donna Mae II’ drifted under another bomber on a bomb run over Berlin, 19 May 1944. A 1,000 lb bomb from above tore off the left stabilizer and sent the plane into an uncontrollable spin. All 11 were killed 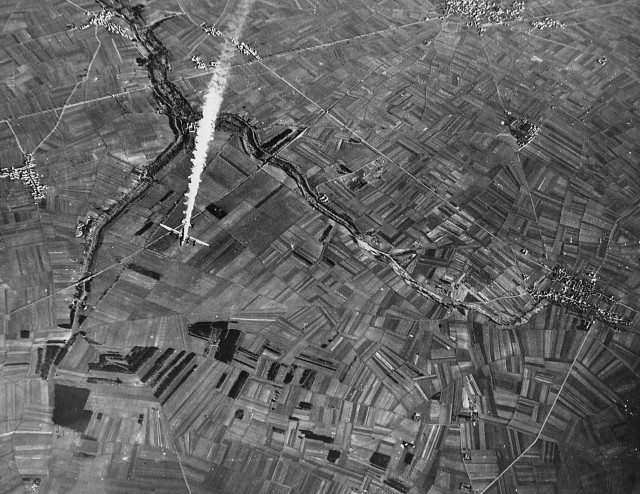 Aerial Photo B-24 Liberator Shot Down Over Germany 1944 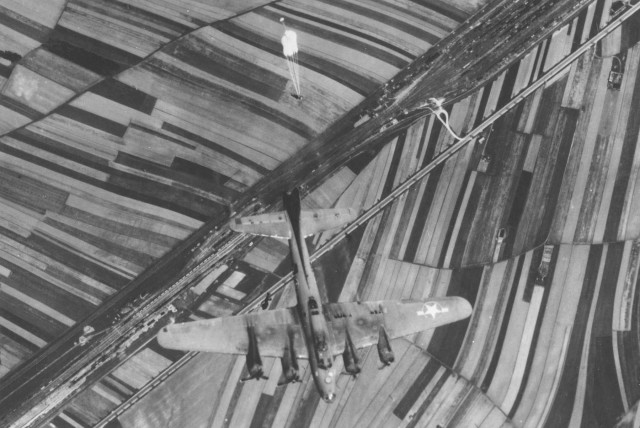 Crew bails out of damaged B-17F Fortress “Patches” at 22,500 feet over Wiener Neustadt, Austria, 10 May 1944. 8 of the crew became POWs and the other 2 were killed. Note 2 right engines feathered 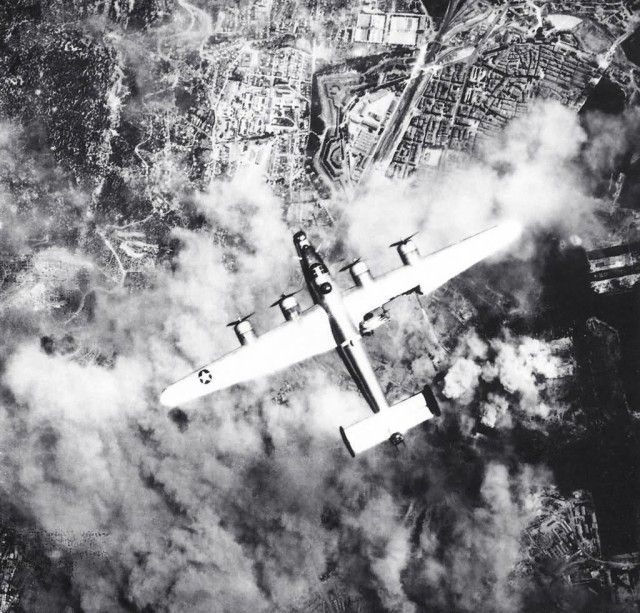 B-24 Bomber Flak Damage, it would not make it home 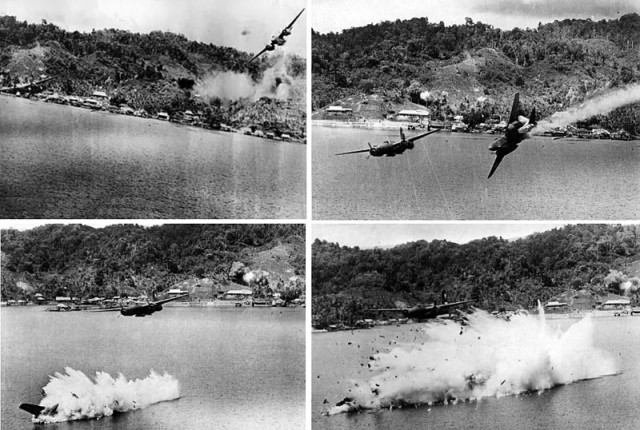 This section was led by Captain Jack W. Klein (taking the photos), followed by 2nd Lt. Melvin H. Kapson (the other aircraft visible) and 1st Lt. James L. Knarr. Approaching from the inland side, they dropped 115 kg bombs which can be seen exploding in the background. Knarr’s aircraft was hit by antiaircraft fire and crashed into the bay, exploding when it the sea. He and his gunner, SSgt Charles G. Reichley, were killed. 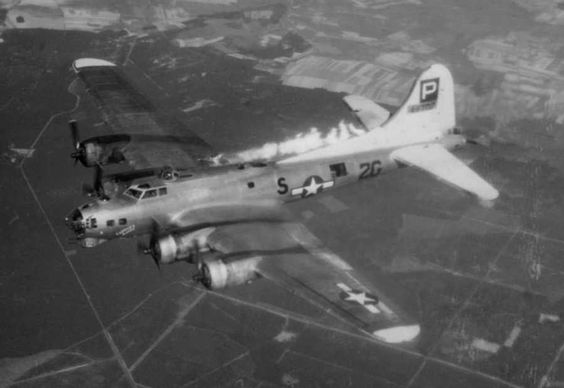 Allied B-17 of the 836th Squadron 10 April 1945. Cannon shells from a German Me262 ripped into it’s tail, perforating the vertical stabilizer & inboard right wing panel. Fire in No 3 engine, flames swept back to the tail. Peeled off shortly afterwards and dropped behind. Crew bailed out at RP, 7 miles West of Elbe River. Later right wing came off. 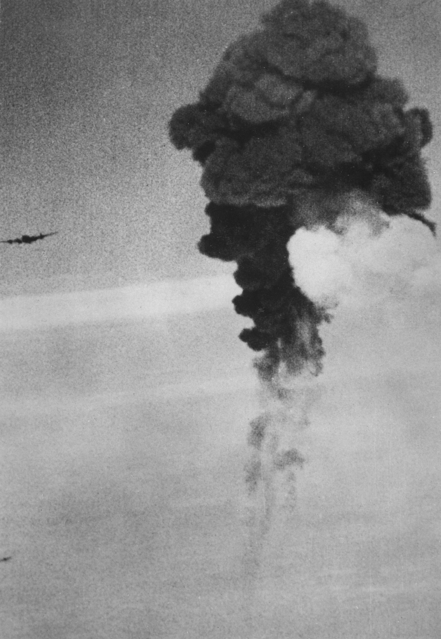 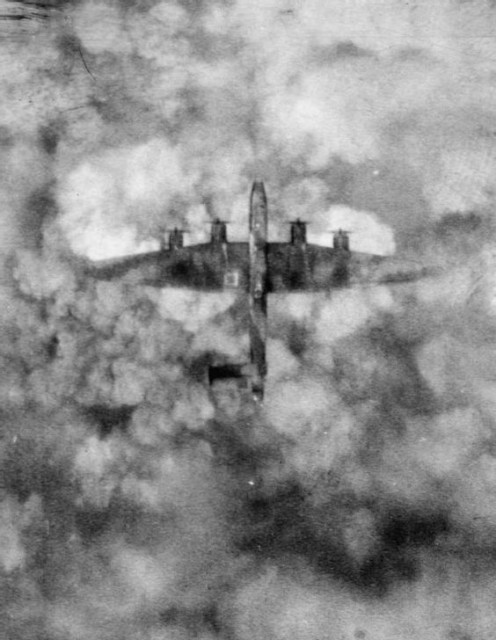 Handley Page Halifax B Mark III, LW127 ‘HL-F’, of No. 429 Squadron RCAF, in flight over Mondeville, France, after losing its entire starboard tailplane to bombs dropped by another Halifax above it. LW127 was one of 942 aircraft of Bomber Command despatched to bomb German-held positions, in support of the Second Army attack in the Normandy battle area (Operation GOODWOOD), on the morning of 18 July 1944. The crew managed to abandon the aircraft before it crashed in the target area. 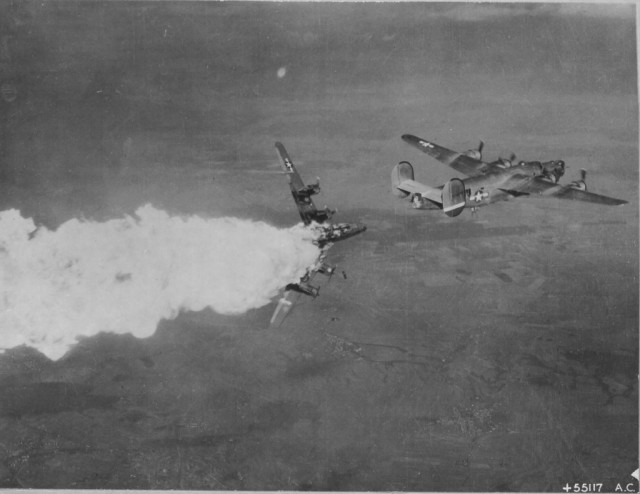 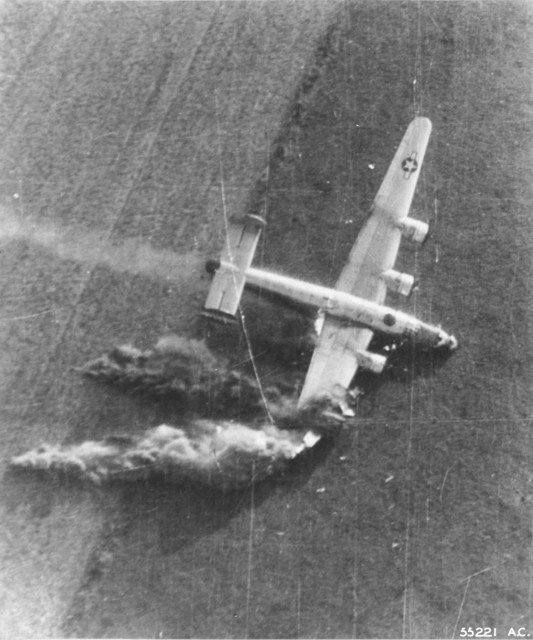 B-24J Liberator of the 854th Bomb Squadron after being hit by light-flak during low-level supply drop for the 82nd and 101st Airborne near Eindhoven, Holland and driven into the ground, Sep 18 1944.