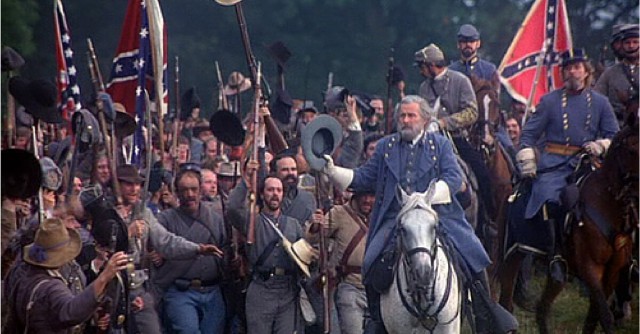 150 years after its end, the Civil War remains one of the most important events in American history. It has been depicted countless times in novels, paintings and on screen. Here are 12 of the best cinematic presentations of the war.

Like the battle it depicts, Gettysburg (1993) is extraordinary in its scale and spectacle. Over four hours long, the film is entirely taken up with depicting the most famous battle of the war. For the first time, the National Park Service allowed film makers to shoot scenes of the Battle of Gettysburg on the battle site. Thousand of Civil War reenactors flocked to set to take part in the film, along with a big name cast that includes Tom Berenger and Martin Sheen. A must see for any fan of war films.

Gone With the Wind

Still remembered as an all time classic, Gone With the Wind (1939) was one of the biggest releases in the history of cinema. Delayed for years by problems with casting, script and direction, it was ground-breaking in its scale. Though its most spectacular depiction of war came in showing the Siege of Atlanta, its greater significance lies in its focus on the impact of war on the South. Though the depiction is one-sided, glossing over the horrors of slavery and the freedom granted to African-Americans by the war, it also shows the hardships the war brought for many southern whites.

Glory (1989) tackles head on the issue of race and its place in the Civil War. Telling the story of the first official African-American unit in the Union army, it shows the hardships African-Americans faced in fighting for their own freedom. Viewed as inferior by many of their comrades and superiors, their struggle for the basic necessities of military life, and for the chance to fight as equals, is a tremendous example of the human spirit, brought to life by fine performances from Denzel Washington and Morgan Freeman.

They Died With Their Boots On

As far from Glory as a Civil War film can get, They Died With Their Boots On (1941) takes the story of one of the war’s most infamous soldiers and throws fact out the window in favour of high excitement. A biopic of the life and death of George Armstrong Custer, it expands his role in the war to make him appear one of its great heroes. Errol Flynn brings Custer to life with his customary swagger, and the film was a box office smash.

No list of films depicting 1860s America would be complete without the presence of John Wayne. Loosely based on the real life Grierson’s Raid, The Horse Soldiers (1959) depicts a Union cavalry raid deep into Confederate territory to destroy supply lines. Full of the action and grit for which Wayne’s films were renowned, it also highlights the important role that the destruction of enemy infrastructure played in the war.

The Red Badge of Courage

An adaptation of Stephen Crane’s classic novel, The Red Badge of Courage (1951) focuses on the experience of battle. A private with no previous experience of war, Henry Fleming finds his courage tested in the face of death. A fitting tribute to the thousands of ordinary men who faced extraordinary danger in the war.

Also exploring the limits of courage, Cold Mountain (2003) depicts the Confederate experience during the final gruelling stretch of the war, when the prospect of defeat loomed constantly over everyone’s lives. A wounded soldier deserts to return home to the love of his life. The Home Guard, set up to defend southerners, devolve into violent vigilantes. And in a nation depleted of so many adult males, the women left behind struggle to get by.

Ride with the Devil

Focusing on the start of the war, Ride with the Devil (1999) shows the escalating guerilla violence that struck many rural communities. Confederate Bushwackers and pro-Union Jayhawkers fight for Missouri, as the line between war and crime dissolves. Incredible attention to detail brings to life the messy, inglorious local violence that was as integral to the war as pitched battles between professional armies.

Spies and saboteurs were important to the war, as shown in Secret Service (1931). Two Union officers are sent behind enemy lines to feed false information to the Confederacy. Incredible danger and divided loyalties plague their lives in this unusual depiction of a neglected part of the war.

Flawed as it is, Gods and Generals (2003) is a bold attempt to bring to life the early years of the Civil War, and in particular the career of Stonewall Jackson. Featuring the battles of Bull Run, Fredericksburg and Chancellorsville, it was intended as a prequel to Gettysburg. While lacking that film’s sense of power and purpose, it still provides an opportunity to see some of the war’s most important battles played out in big budget glory.

While many films have focused on the action of the Civil War, few tackle its politics in such detail as Lincoln (2012). Featuring Daniel Day-Lewis as perhaps the most famous President in American history, it portrays the struggle within the Union for full emancipation, the peace negotiations that were its background, and the lead-up to Lincoln’s assassination. Like Glory, it acts as a reminder of what was at stake for African-Americans, and of the chilling fact that, even by the end of the war, racism remained endemic within the Union’s political institutions. Worth watching for Day-Lewis’s performance alone, which makes Lincoln a sympathetic and intriguing character.

Most films about the Civil War try to appear realistic, however much they bend the truth to dramatic effect. Abraham Lincoln: Vampire Hunter (2012) is no such film. Turning Lincoln’s life and the Civil War into a monster hunting story, it uses vampirism as a metaphor for slavery, drawing out the darkness of the era. Action packed and stylishly shot, it’s not to be taken seriously, but shows how history can create a space for wilder flights of fancy to thrive. After eleven films that strive to show the war as it was, it can be refreshing to take a change and see it brought to life as it most definitely wasn’t.