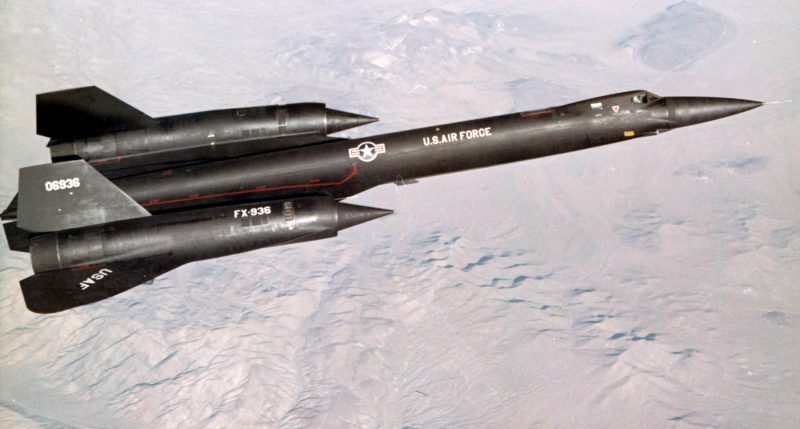 The Lockheed YF-12 was an American prototype interceptor aircraft evaluated by the United States Air Force. The YF-12 was a twin-seat version of the secret single-seat Lockheed A-12 reconnaissance aircraft, which led to the U.S. Air Force’s Lockheed SR-71 Blackbird twin-seat reconnaissance variant. The YF-12 set and held speed and altitude world records of over 2,000 mph and over 80,000 ft (later surpassed by the SR-71), and is the world’s largest manned interceptor to date.

In the late 1950s the United States Air Force (USAF) sought a replacement for its F-106 Delta Dart interceptor. As part of the Long Range Interceptor Experimental (LRI-X) program, the North American XF-108 Rapier, an interceptor with Mach 3 speed, was selected. However, the F-108 program was canceled by the Department of Defense in September 1959. During this time, Lockheed’s Skunk Works was developing the A-12 reconnaissance aircraft for the Central Intelligence Agency (CIA) under the Oxcart program. Kelly Johnson, the head of Skunk Works, proposed to build a version of the A-12 named AF-12 by the company; the USAF ordered three AF-12s in mid-1960.

The AF-12s took the seventh through ninth slots on the A-12 assembly line; these were designated as YF-12A interceptors. The main changes involved modifying the A-12’s nose by removing the chines to accommodate the Hughes AN/ASG-18 fire-control radar originally developed for the XF-108, and the addition of the second cockpit for a crew member to operate the fire control radar for the air-to-air missile system. The modifications changed the aircraft’s aerodynamics enough to require ventral fins to be mounted under the fuselage and engine nacelles to maintain stability. The four bays previously used to house the A-12’s reconnaissance equipment were converted to carry Hughes AIM-47 Falcon (GAR-9) missiles. One bay was used for fire control equipment.

The first YF-12A flew on 7 August 1963.President Lyndon B. Johnson announced the existence of the aircraft on 24 February 1964. The YF-12A was announced in part to continue hiding the A-12, its still-secret ancestor; any sightings of CIA/Air Force A-12s based at Area 51 in Nevada could be attributed to the well-publicized Air Force YF-12As based at Edwards Air Force Base in California.

On 14 May 1965 the Air Force placed a production order for 93 F-12Bs for its Air Defense Command (ADC). However, Secretary of Defense Robert McNamara would not release the funding for three consecutive years due to Vietnam War costs. Updated intelligence placed a lower priority on defense of the continental US, so the F-12B was deemed no longer needed. Then in January 1968, the F-12B program was officially ended.

The program was abandoned following the cancellation of the production F-12B, but the YF-12s continued flying for many years with the USAF and with NASA as research aircraft.

The initial phase of the test program included objectives aimed at answering some questions about implementation of the B-1. Air Force objectives included exploration of its use in a tactical environment, and how airborne early warning and control (AWACS) would control supersonic aircraft. The Air Force portion was budgeted at US$4 million. The NASA tests would answer questions such as how engine inlet performance affected airframe and propulsion interaction, boundary layer noise, heat transfer under high Mach conditions, and altitude hold at supersonic speeds. The NASA budget for the 2.5-year program was US$14 million.

Of the three YF-12As, AF Ser. No. 60-6934 was damaged beyond repair by fire at Edwards AFB during a landing mishap on 14 August 1966; its rear half was salvaged and combined with the front half of a Lockheed static test airframe to create the only SR-71C.

YF-12A, as lost on 24 June 1971 due to an in-flight fire caused by a failed fuel line; both pilots ejected safely just north of Edwards AFB. YF-12A, AF Ser. No. 60-06935 is the only surviving YF-12A; it was recalled from storage in 1969 for a joint USAF/NASA investigation of supersonic cruise technology, and then flown to the National Museum of the United States Air Force at Wright-Patterson Air Force Base near Dayton, Ohio on 17 November 1979.