Olivier Dorrell returns to guide us through an immensely important subject to collectors and re-enactors.

The M1 helmet was a unique and practical solution, compared to its contemporaries.

A separate lining system had many advantages. Being light weighted it could be used without the steel shell for guard or ceremonial duties, whilst the shell itself could also double up as a wash basin in the Field

Brought into service in 1941 the M1 liner underwent a variety of design and material changes over its service life, with the most important developments happening during the Second World War. 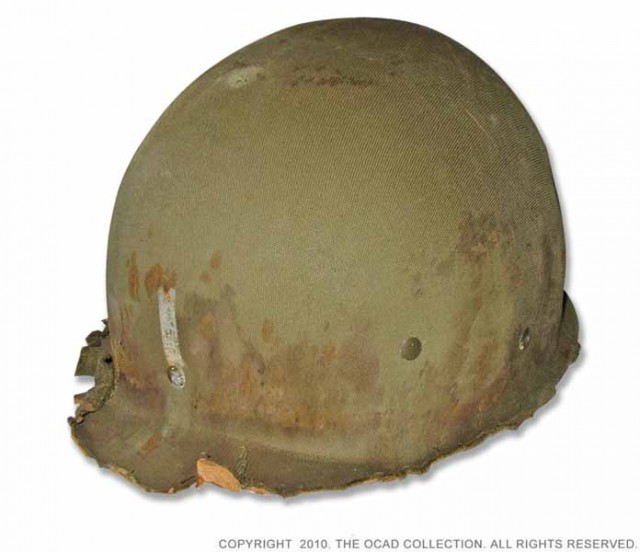 An early liner made from compressed card.

The first liners were from the Hawley company. Distinctive in form and desirable to collectors, the Hawley liner mimicked the shell in form, and was made of compressed cardboard painted a light shade of khaki green in the inner. It was covered by a similar coloured cloth stretched over its outer surface and tucking under the rim into a bevel, a key characteristic of all Hawley liners.

White rayon was initially used for the webbing, attached to the liner by rectangular aluminium washers. An adjustable and removable rayon sweatband was also clipped into position using poppers, and featured a leather lined forehead section.

Later Hawley examples featured light khaki herringbone twill webbing with ‘A’ washers. An improved sweatband was now fully faced in lea and clipped onto the webbing.

Due to their fragility and susceptibility to damp and humid conditions the Hawley liner was replaced in favour of what collectors termther Low Pressure liners. 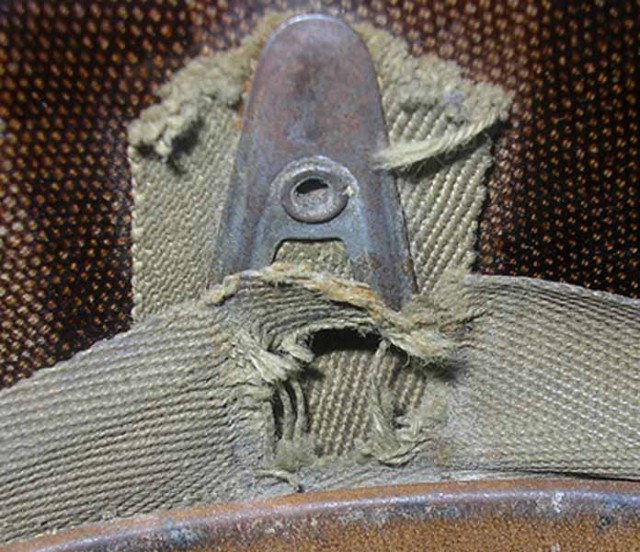 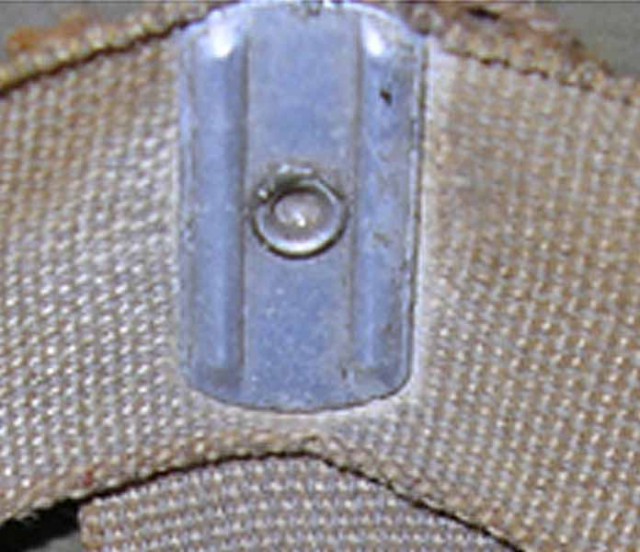 A composite showing different washers.
Low Pressure liners were made by the companies Hood and St Clair and were constructed of rubber fibre. The outer surface was painted olive drab and featured an air vent above the frontal rivet, a feature of all subsequent wartime liners. The air vent was also used to attach officer rank insignia. The interior was left unpainted. The material thickness is also notable thinner than all other liner variations. The webbing was as that used on later pattern Hawleys. 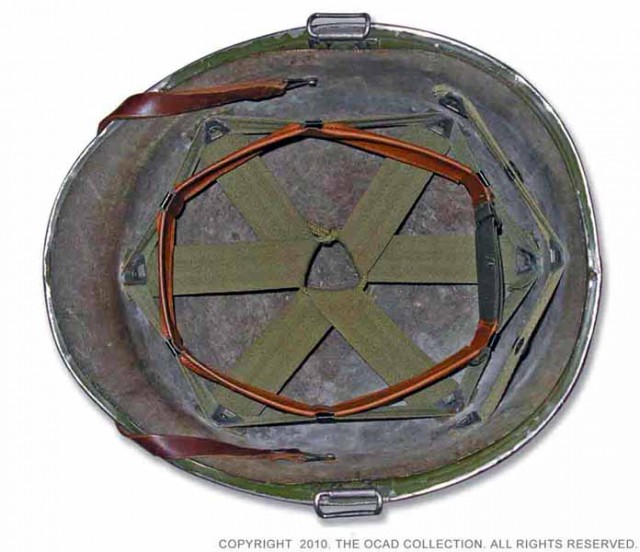 The dull finish of this liner is much different from the classic tortoiseshell look.

Similar to their cardboard cousins, the Low Pressure liner was soon also found to be inadequate for military use, with many later being refurbished as kid’s toys.

By late mid-war the High Pressure liners had generally replaced the older patterns and were manufactured by a host of companies. Such liner bodies were hard and made up of a composite fibre material, which could take some flexing but would split under increased pressure. As with all M1 liners their shape was a clone of the steel shell and fitted snugly into place. However it is not uncommon to see scuff marks or scratches, especially on the exposed rivet heads. 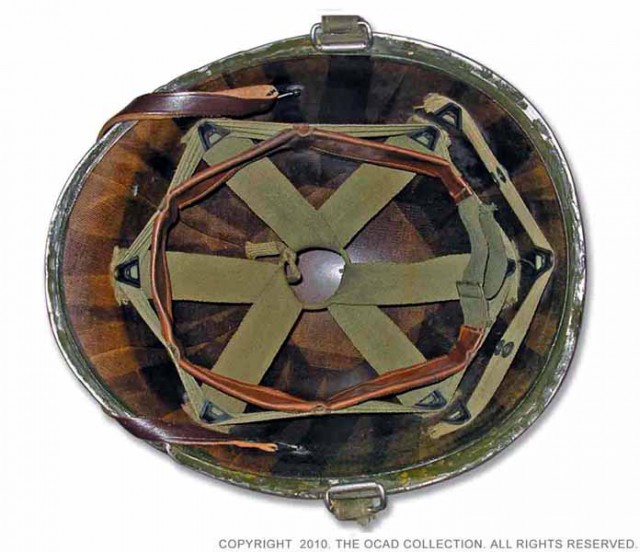 This liner’s tortoiseshell patterned interior has a classic look about it and is much sought after.

The outside surface of the HP liner was OD, reflecting the colour of the shell, but in some rare cases liners have been found where they were left unpainted. The inside of the body was left unpainted and has a ‘Tortoise-shell’ look.

It is not uncommon to find liners sporting regimental and or divisional crests and markings or even the outer surface painted in another colour; such as white for medics, military police (“Snow-drops”) or snow camo etc.

Chinstraps were made from brown leather and featured a green metal adjusting clip, which later changed to black. After WWII the colour of the liner’s webbing also changed
to a darker green shade. 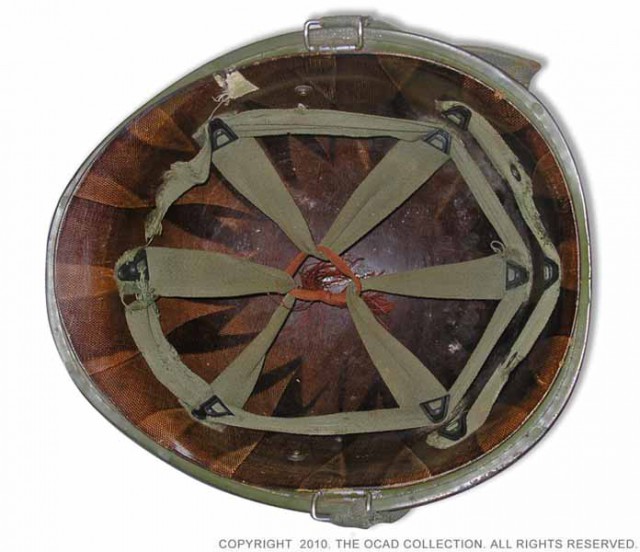 A liner from the Korean War period

Aside from the early examples made by Hawley, Hood and St. Clair, liners were also manufactured by Capac; Firestone; Inland; International Moulded Plastics; MSA; Seaman and Westinghouse. At the end of the war these companies resumed their peacetime role, with Capac supplying a limited number of liners for the Korean War period. 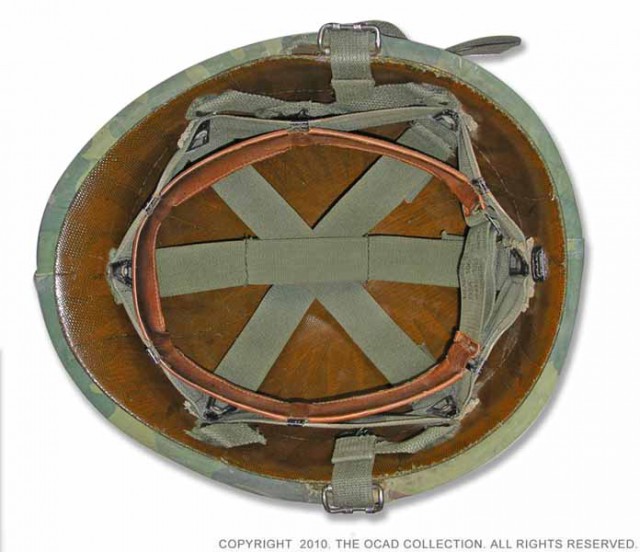 The Vietnam War era liner was made from a thicker fibre that was more orange in appearance. It lacked an air vent and separate chinstrap, while the webbing arrangement was simplified. Instead of the helmet sitting low over the nape of the neck it was worn more level on the head. The M1 was finally replaced during the 1980s.

Look out for more helmet and headgear related features from Olivier in the near future.